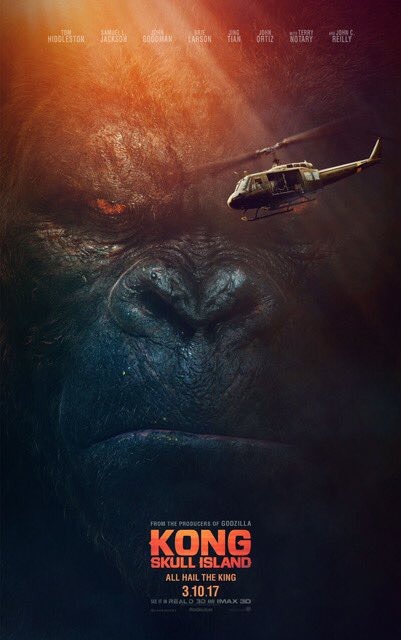 "Kong: Skull Island" isn't just a great monster movie, it's a great movie in general. I don't understand why it received such horrible reviews from the audience as I thoroughly enjoyed it from start to finish.

We follow scientists, soldiers, adventurers, and more to Skull Island, the home of Kong. However, they aren't expecting the giant ape waiting for them. After destroying most of their helicopters, the group is stranded on the island, with no way out.

I thought the visual effects and the cinematography was incredible. Kong and the other monsters on the island looked so real, and the effects on the island were very well done. The cinematography made the film feel very real, and immerses you into the magical island. I am fascinated by the way the camera catches the fight scenes of these CGI giants. It was all masterfully created.

The acting performances in this film is fun to watch, especially John C. Reilly's character. He plays a WW2 pilot who crash landed on the island and is now stuck on the island. His role is the comedic relief in the film, and you just root for his character throughout. Samuel L. Jackson also plays an excellent villain, who has a personal vendetta against Kong for killing his men. The one shot where Jackson stares down the giant ape sends chills down your spine.

Even though the film is well crafted and exciting, there are some cheesy moments in the film that I appreciated. Take a look at the scene where Tom Hiddleston's character kills the pterodactyl-type creatures while wearing a gas mask in the green mask. The slo-mo shot is comedic as it seems very over the top and is not as dark as the rest of the film. I personally loved these moments as it is a light note in a film full of death and destruction. Also, they serve as callbacks to the cheesy old monster films that are the forefathers to the new Monster Universe.

I was also a fan of how much screen time Kong actually received. In terms of films like Jaws and the Peter Jackson "King Kong" film, we don't see the monster till way later in the film. It's as if the whole film is a build-up to the legendary monster at the end of the film. However in this take on King Kong, we are introduced to the legendary ape 30 minutes into the film, and he dominates the screen for the rest of the runtime.

A lot of viewers have complained about not seeing Kong in New York. Personally, I was fine with not seeing him climb the Empire State Building. I applaud the courage the filmmakers had to set the entire film in Skull Island, and I think they did an amazing job. By watching this film, you can see how powerful Kong is, and how he deserves his rightful title of King.