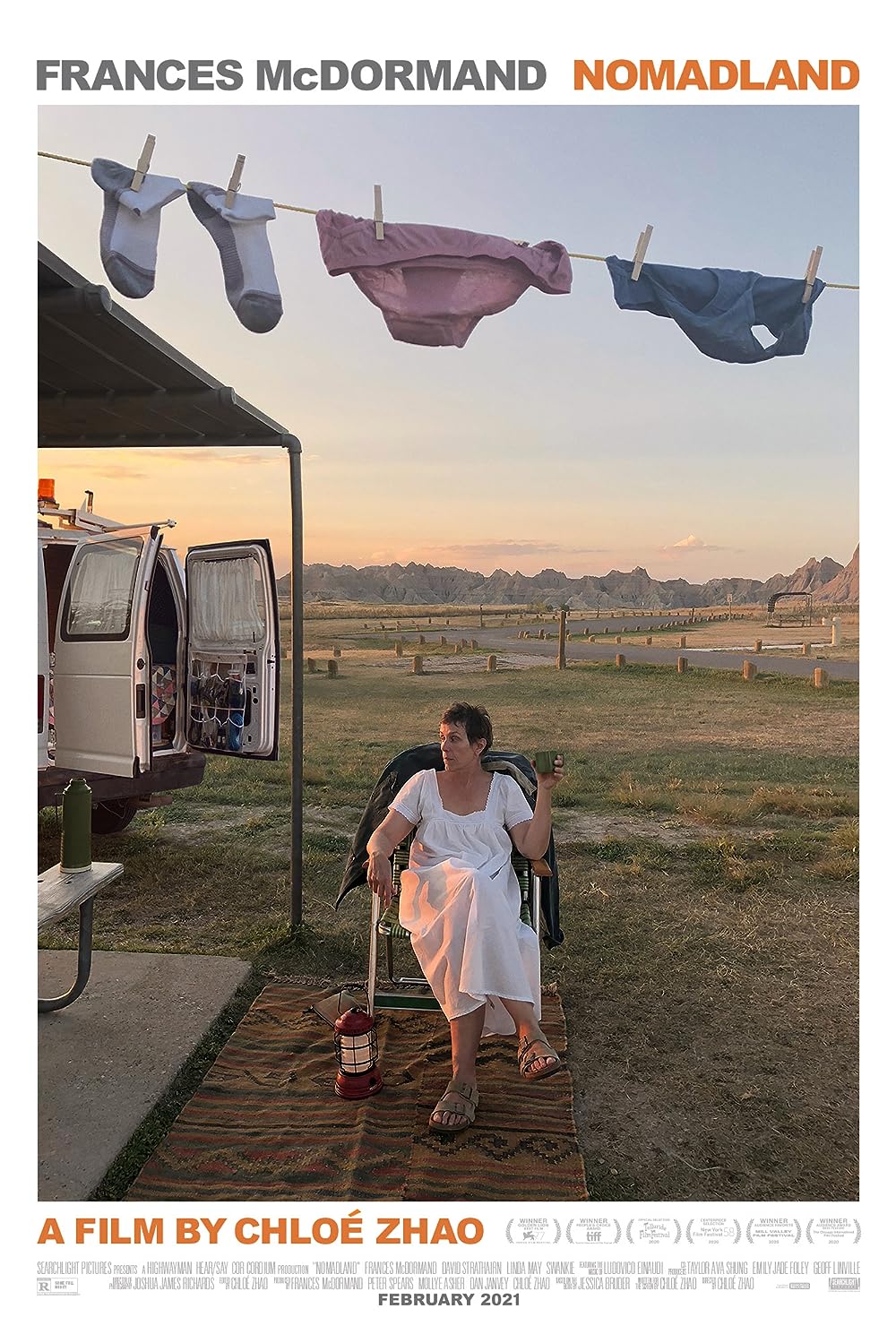 Following Frances McDormand's character Fern, who is a middle-aged "nomad" who has lost everything, Chloé Zhao's film Nomadland is essentially about the discovery of oneself and finding what makes us happy in modern day America.

From the opening frame of the film, we are given the information that following the Great Recession, the US Gypsum plant in Empire, Nevada has shut down, the place where Fern and her husband, who has just recently died, worked at for many years. From this, Fern decides to sell most of her belongings and purchase a van to live in and drive as she goes to look for work. She ends up working seasonal jobs at an Amazon Fulfillment Center. While not working for Amazon, she drives from state to state, trying to find work to make a living.

For me, the most moving moment of the film is where Swankie, a nomad Fern befriends, tells her of her cancer diagnosis and her shortened life expectancy. She confides in Fern that she would rather make good memories on the road, doing what she loves, than to spend the rest of her days in a hospital bed. The most moving part of this whole sequence though is when Swankie gives away some of her belongings, and tells the other nomads where each item came from and how they were special to her. In this moment, we are seeing a dying lady giving off her special memories and cherished items for others to enjoy when she is not on this world anymore. After this, Fern and Swankie say their goodbyes, and we never see or hear of Swankie again. This shows the devastating reality of a life where only a handful of people will think about you when you're gone. To anyone else, it's just another crazy old woman that lives in a van, but to people who knew her, like Fern, she made an impact on the people she knew.

What's amazing about this film is that it shows the scenic landscapes of where Fern travels, and her adventures and times exploring the natural habitats in all these states that she visits. A lot of films that are released never really show the journey of our characters, just the destination. This film however shows our main protagonist on her journey, and she hasn't really reached her destination yet, which is to be fully happy and contempt with what life has given her.

Another topic that this film grapples with is loneliness, and what it's like to be lonely in society. This is evident in the beginning of the film, where Fern wishes herself a happy New Years, then blows out the candle and eats her dessert all alone. This produces feelings of sorrow and empathy from the audience towards Fern, as everyone has experienced loneliness at least once in their life. Fern is having to deal with loneliness for the rest of her days as everyone she meets goes away in the end.

This is Chloé Zhao's third feature film, which she has directed, edited, and written the screenplay for based off of the 2017 novel of the same name by Jessica Bruder. Zhao is a Chinese filmmaker, who has been a very sought after director ever since releasing her first feature film, "Songs My Brothers Taught Me" in 2015. She is going on to direct the new Marvel film "The Eternals", which will be released later in 2021.

This film contains only two main actors, which are McDormand and David Strathairn, who plays fellow nomad David. Most of the nomads that Fern encounters throughout the film are real life nomads, and they tell their real stories throughout the film. This makes the film more personal as we are now seeing the real life stories of these people - all the hardships in their lives, the happy moments, their possessions, etc - play out on the screen before us. Calling this a personal film would be an understatement, as this is a passion project to explore and show the history and lives of the nomads living in society today.