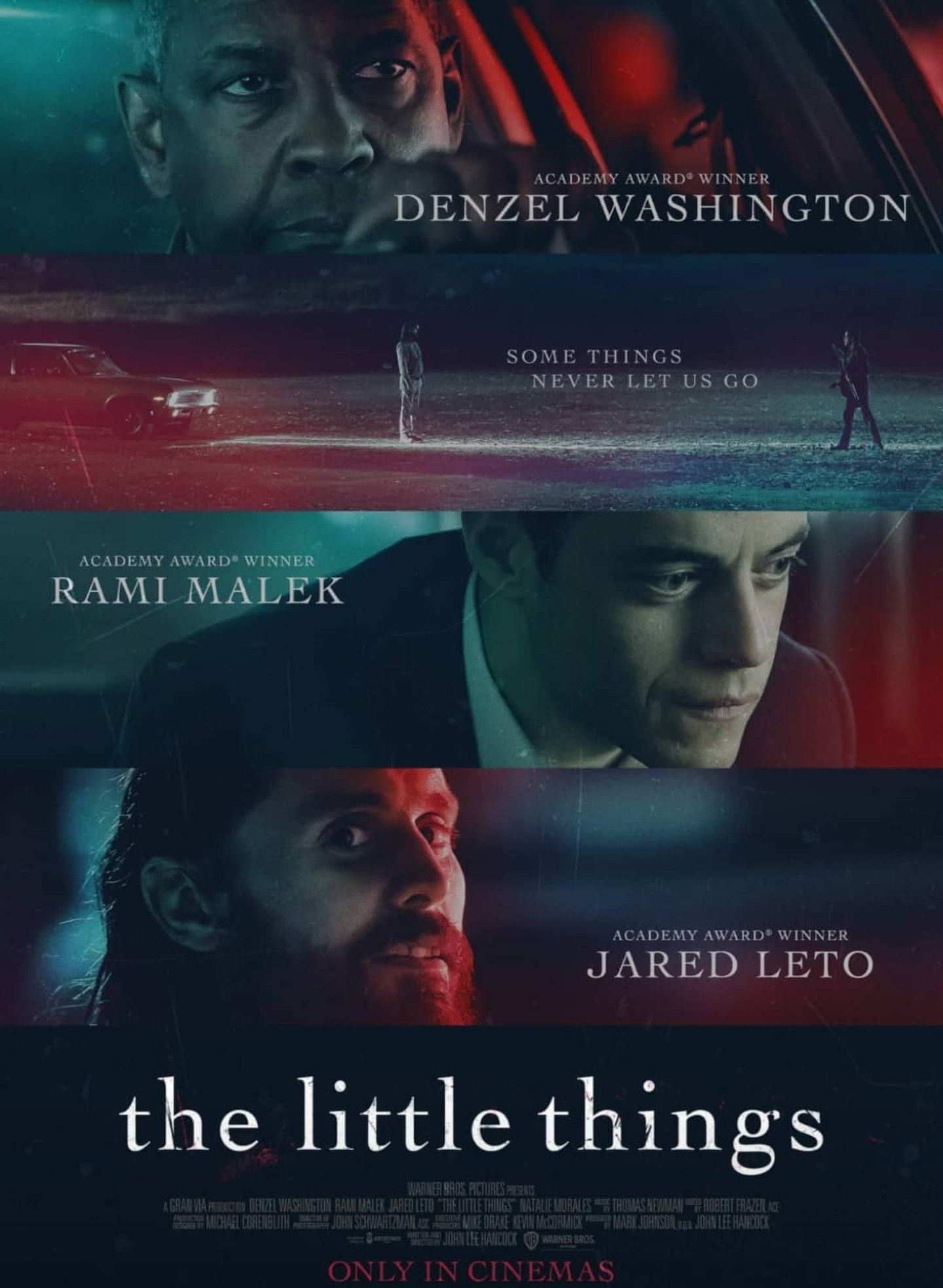 John Lee Hancock penned the screenplay for "The Little Things" in the early 90's, but held off on it until he had created a pretty successful resume for himself, directing such hits at "The Blind Side" and "Saving Mr. Banks". However, after the critical success of films like "Silence of the Lambs" and "Se7en", it seems like we're getting a dark, eerie thriller all the time, and each one tries to outperform the other on the shock value.

Hancock gets the star power of Denzel Washington, Rami Malek, and Jared Leto. However, the script lacks the potential it gives these star players. We follow a disgraced LA police officer and now Kern County sheriff, Joe Deacon (Washington), who gets sucked back into the grim atmosphere of LA crime by assisting his replacement, Jim Baxter (Malek), on a serial killer case. The serial killer seems to target young female victims, which has everyone on edge following the attack of the Night Stalker that just recently happened in LA. They quickly discover a very creepy character known as Albert Sparma (Leto), who they are certain is their culprit. The course of the movie then changes from a mystery thriller to a deadly game of cat and mouse, as these two cops now follow Sparma's every move, trying to catch him before there is another victim.

This film has a very promising premise and a very promising cast, and it delivers on screen. I was on the edge of my seat viewing this film, eager at what is going to happen next. The suspense is superb, as it makes you genuinely feel terrified for the characters. An example of this is when Deacon is following Sparma's car, which is parked on different sides of the road every time he drives around to catch him, until finally, Sparma's car pulls up right beside Deacon's. It is a very intense couple minutes of the film, and you can finally breath easy when Sparma's car finally drives off.

Leto's portrayal of Sparma is the best thing about this film. There are such creepy and disturbing qualities that Sparma portrays during the film that leaves your stomach in knots as you watch. For example, when Deacon is trying to sneak into Sparma's apartment to look for clues, Sparma calls the cops to his apartment (unbeknownst to our two protagonists), and everyone in the neighborhood looks on as the squad cars pull up. When Baxter gets out of the car to see what is going on, he looks over and sees Sparma in the crowd of people, sipping on a drink and waves to the detective. This is a very uncomfortable setting that the antagonist has set up, and you start worrying for Deacon who could possibly get caught.

This film has a very good buildup, and as we feel as if we're about to have this huge pay off in the end,  it ends with a disappointing and sudden abrupt halt to the climax. After viewing this film, and having more questions than answers, I was left feeling very disappointed and unsatisfied by the ending. As a viewer, I was expecting a huge showdown between the three main characters, only to receive a bland ending that just doesn't work. I credit this disappointing ending to the fact that most thrillers nowadays try to stand out and be unique, and to try to match the surprise endings of films such as "Se7en". However, when viewing this film, I didn't want a surprise and shocking ending, but more of a satisfying ending to this 2 hour police chase we had just witnessed.

Throughout the film, the audience is certain that it was Sparma all along, but could it really be someone else? Could the two cops be wrong, and they have been chasing a sadistic, yet innocent, man? We will never know the definite answer, so it's up to us as the audience to come up with our own killer. And how do we do that in a film that we were certain we knew who the murderer was? I guess we just listen to Deacon's words to Jimmy: "It's the little things that get you caught."