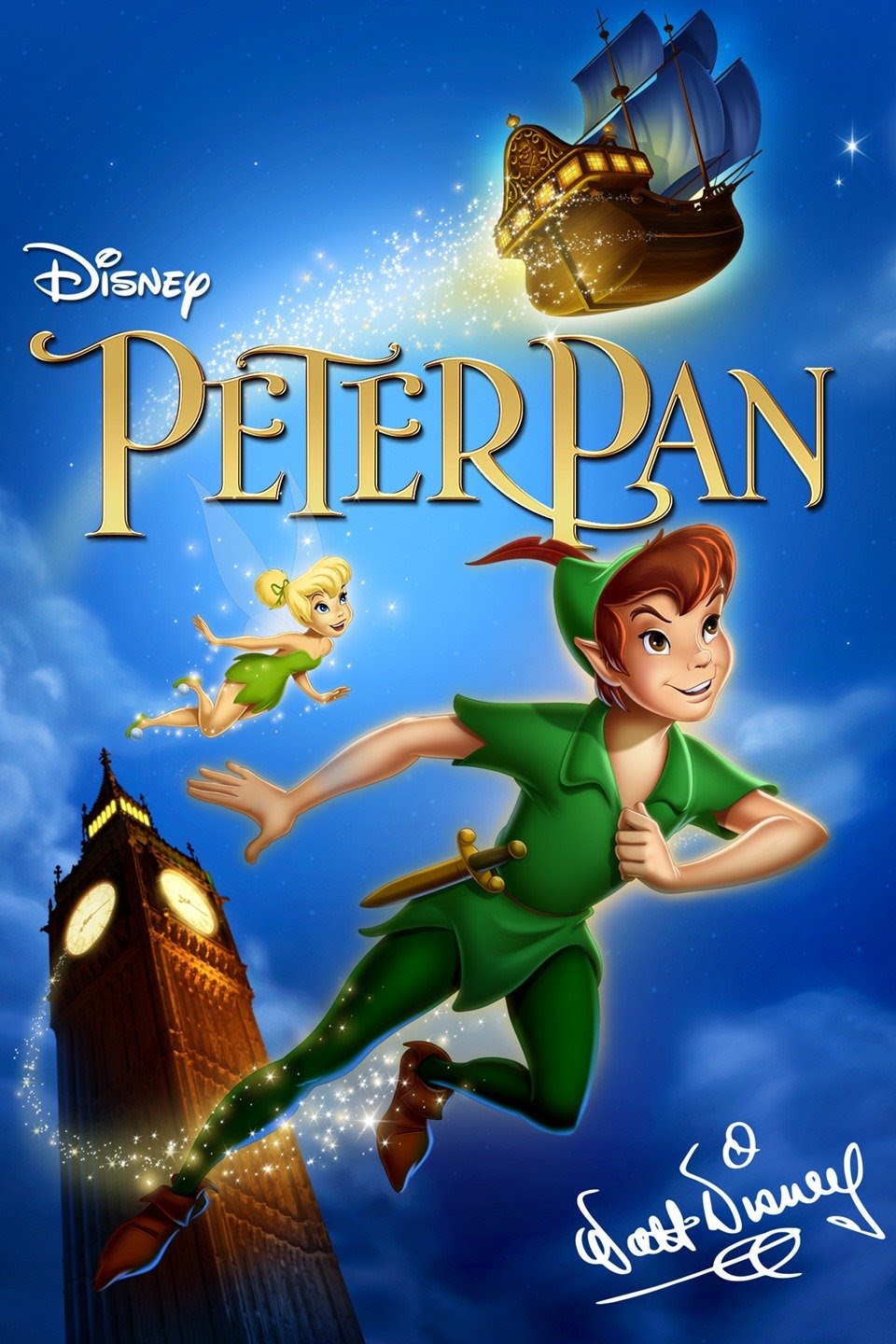 "Peter Pan" has had many different adaptations and performances. Women, middle-aged men, and children have all taken on the role of the flying hero. However, it has never been done with such charm and beauty as Disney's 1953 take on the classic play by James M. Barrie.

Little Wendy Darling (Kathryn Beaumont) is told by her father that she is to leave the nursery the following morning. She is heartbroken as she doesn't want to grow up yet; she wants to stay a child with her two younger brothers, John (Paul Collins) and Michael (Tommy Luske). When the parents leave for the night, Wendy asks them to keep the window unlocked as she has stolen Peter Pan's shadow. Her mother reluctantly leaves it unlocked, concerned for her daughter and the vivid imagination she has.

However, Peter Pan (Bobby Driscoll) does show up at her window, accompanied by his little companion Tinker Bell. Wendy catches him, and tells him of her father's plan to move out of the nursery and force her to grow up. Peter is appalled, and takes Wendy and her two brothers to Neverland, the place of their imaginations. They meet mermaids, tribal Indians, and are on evil Captain Hook's (Hans Conried) radar.

I would describe this film as a more light-hearted and playful version of Disney's earlier animated film, "Alice In Wonderland". Alice is terrified of the curiosities present in Wonderland. In this film however, everything feels so wonderful. Even the cruel mermaids and Captain Hook don't seem as bad as the nightmare-inducing things Alice has seen and experienced.

The chemistry and relationship between Hook and his loyal first mate Mr. Smee (Bill Thompson) is hilarious and incredibly fun to watch. Take the scene where Smee accidentally shaves a bird's bottom and then panics when the bird moves and Hook's head is not present. Smee thinks he accidentally cut off Hook's head and starts to panic. He runs around, trying to find the head to somehow reattach it, while Hook watches angrily. Then, when Hook's head gets stuck in a chair, Smee believes he's found it and starts pulling on it, hurting Hook even more. It's incredibly funny watching the trouble Smee's antics get him into.

The crocodile is also a good addition to the film. The crocodile has eaten Hook's hands prior to the events that take place in the movie. Because of this, Hook now has an enormous fear of the crocodile, who lets his presence known by a clock-ticking sound he makes.

Watching this film again, I've started to notice how conceited and self-absorbed Peter Pan is. He really only cares about himself, and thinks he's better than everyone else. Take the scene where Wendy tells the Lost Boys about mothers, and they all want to return to their own mother afterwards. Peter snaps at them, and tells them to leave and grow up, but they may never return to Neverland. I've noticed Peter acts like that whenever "growing up" is talked about or mentioned. Is he scared of growing up and thinks he can avoid it?

Also, a question that has been on my mind is how much does Peter actually care about Wendy? He is seen infatuated by her, but then dances intimately with Tiger Lily at the Indian festival. He wants everything in the world, and throws away the old items once something new and shiny comes along.

Even though Peter does have his flaws, he eventually saves the day by defeating the evil pirates and taking over the ship. He sails with his Lost Boys, finding new adventures to go on. The final shot of the film sees the parents looking out the window with Wendy, watching the large pirate ship float through the night sky. We see her dad give a genuine smile for the first time, saying he remembers a ship like that from his childhood. Even though growing up is inevitable, we will always remain children at heart.