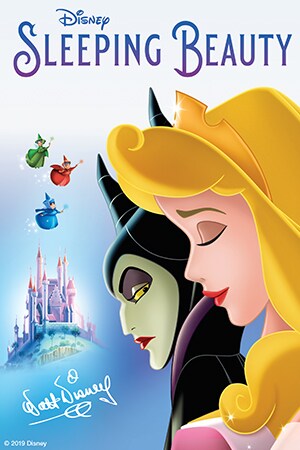 Whenever watching a classic Disney film, you always get a certain burst of happiness and excitement that you don't get with any other film. From my experiences, you get the same feeling walking into a Disney theme park.

"Sleeping Beauty", released in 1959, is one of Disney's most famous classics. The film revolves around the life of Aurora, a young princess who was cursed by the evil fairy, Maleficent. Her destined fate is to prick her finger on a spinning wheel before her 16th birthday, killing her. The Three Good Fairies - Flora, Fauna, and Merryweather - are able to change the curse, making Aurora fall asleep instead. The only way to wake her up is from true love's kiss. The fairies then disguise themselves as regular humans and are tasked with raising Aurora (who they re-name Briar Rose) until after her 16th birthday.

This film is just absolutely beautiful. The animation is changed from the previous Disney animated films. From the opening shot, you can tell that every shot in the film has a vast background. Spending $6 million and six years to fully animate the film, the animators succeeded in making such an immersive world to tell their story.

I adore the simplicity of the plot. Our two main protagonists -  Aurora and Prince Phillip - are madly in love with each other - even though they just met for the first time! Well, technically that's not true. They met for the first time at Aurora's coronation, which I doubt either remembers. She sings a song with the animals in the forest, and Phillip hears. Her voice is beautiful, and he is caught under her spell. He realizes this is the girl he has seen in his dreams, and goes after her.

They end up dancing and singing a song together, which then prompts them to want to be together. Unbeknownst to them, they are actually engaged to be married. I love how it's so simple for the two characters to fall in love. Unlike the Disney films being made now, there is no flirting or awkwardness between the two characters. It's pure teenage romance, which is hard to find anymore in the 21st Century. It gives you a sense of euphoria watching the two lovers engage in dance and song, showing how happy they are when they're together.

Maleficent is one of the best Disney villains. She's the right amount of creepy and intimidating. The ending fight of the film where she turns into a huge, fire breathing dragon is incredible; we see how strong the evil fairy actually is. She is considered by many to be the leader of the Disney villains, and it's plain to see why when watching this film.

The Three Good Fairies provide some of the most memorable and funniest moments. I'm sure everyone is aware of the running gag throughout the movie of Flora and Merryweather changing Aurora's dress to match their colors. Even the final shot of the film has the two fairies arguing and changing the young princess's dress while she is dancing with their prince. Their dry humor when talking to one another is smart and funny as well, which you didn't see as much in animated films back in the 50's.

"Sleeping Beauty" has a huge place in Disney's vast empire. The songs and characters from this film are widely known, and the film has a huge influence on Disneyland; the centerpiece of the park is called "Sleeping Beauty's Castle". This is the last Disney princess film Walt Disney oversaw, and it's quite possibly his best one.