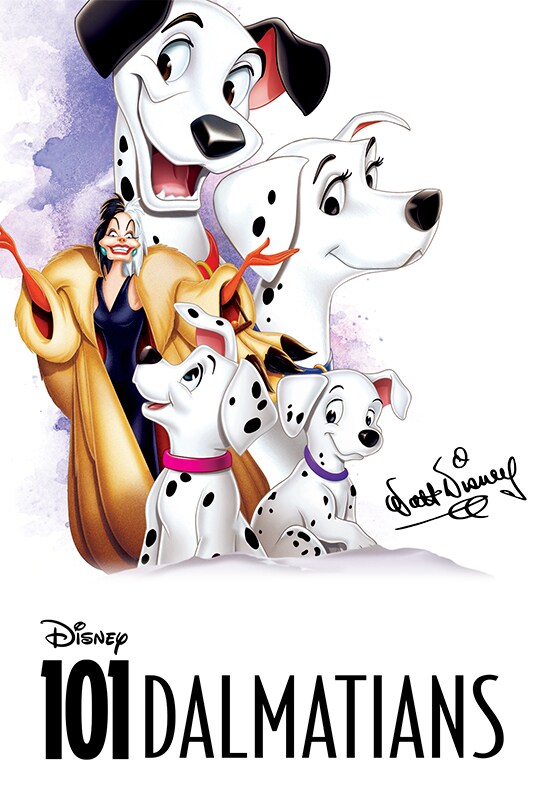 "101 Dalmatians" is one of the last films Walt Disney oversaw before his untimely death five years later. It's cute and enjoyable, yet isn't in the same league as other classic Disney films such as "Snow White and the Seven Dwarfs" and "Sleeping Beauty". However, the adventure that involves a kidnapping and a rescue by the two parents is a fun film to watch with the whole family.

The film follows two Dalmatians in London, who live with their two human owners. When the female dog, Perdita, becomes pregnant with puppies, both the dad, Pongo, and their two human owners, Roger and Anita, are ecstatic. She gives birth to fifteen cute puppies, and everything seems to be going very well for the family.

However, Cruella De Vil enters the picture. She is a crazed woman who is obsessed with fur coats. She wants the puppies for herself so she can turn them into fur coats. When Perdita gives birth to the litter, Cruella hired two goons, Horace and Jasper, to kidnap the puppies. They bring the puppies back to a mansion, where there are many more Dalmatian puppies that are unknowingly awaiting their doom.

This film is really fun and keeps you on the edge of your seat, in a way. From the kidnapping to the escape from the goons, the entire film is very enjoyable and comedic. The animation in this film isn't superb, but I thoroughly enjoyed the opening credits animation. It probably gave Monsters Inc. the inspiration for their opening credits since both are so very similar.

However, this film doesn't hold up to the standards Disney has set, in my opinion. It's very fun to watch and does feel like a classic Disney film, but you don't receive the same feeling after watching it compared to some of the films that came before this one. However, the one thing that does compare to the other Disney films is the villain. Cruella De Vil is an amazing villain with such a wicked and horrible motive for what she does. She can be compared to the likes of Maleficent and the Evil Queen, and could possibly be higher up on a ranking of Disney villains.

This film has spawned multiple reboots and live-action adaptations. Even though those are fun to watch, nothing compares to the animation and the classic tale that the original Disney film does. Even though it isn't on the level of other Disney films, it's still a classic which is extremely fun to watch.