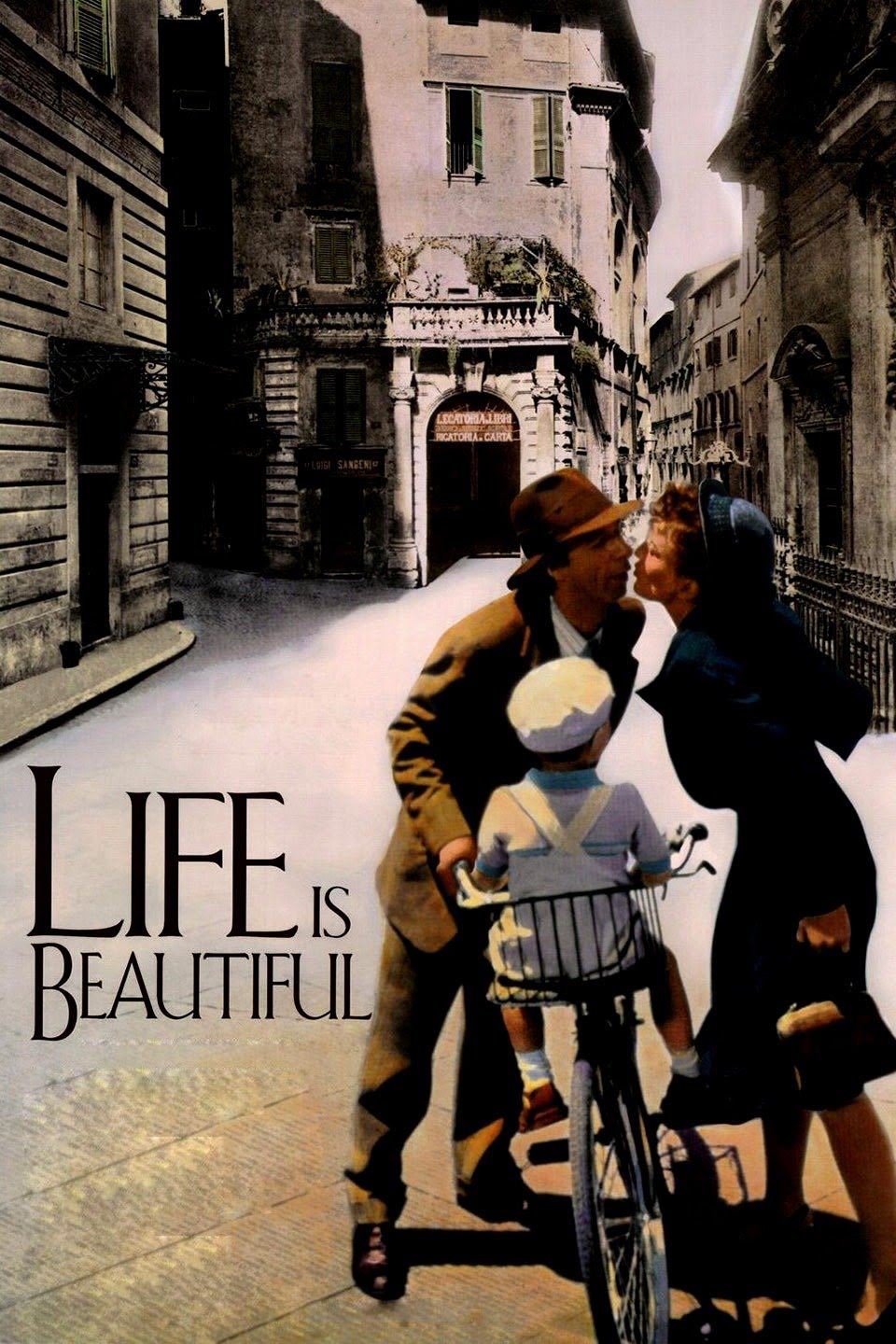 "Life Is Beautiful" is such an incredibly beautiful film. Roberto Benigni is absolutely incredible as he directed, co-wrote, and starred in this film about a man, named Guido, who absolutely loves life. We follow this man on his journey to win the heart of a beautiful girl, Dora (played by Nicoletta Braschi, who is actually married to Benigni in real life). Throughout the first hour of the film, he wins her heart and they settle down and have a child together named Joshua (Giorgio Cantarini). After the first half, the movie then takes a very dramatic turn as it moves from romantic comedy to a heartbreaking film about the Holocaust during the Second World War.

Looking at the first act of the film, it's a great romantic comedy. Benigni's actions throughout the film remind the viewer of sequences performed by Charlie Chaplin previously. He is so charming, and the interactions between him and Braschi are so wonderful to watch. They end up together unsurprisingly, and get married and have a child. I love the shots in this sequence as we watch them enter a room to make love, and then years have passed and a little boy runs out. The years go by off-screen and it's such a wonderful and beautiful moment in the film.

Dora comes back to the house she shares with Guido with her mom, and they notice the house has been broken into and everything inside is toppled over and disarrayed. Something is definitely wrong, yet we don't know what until the next shot. We see Guido and Joshua on a train, heading to a Nazi concentration camp. This change in the film's tone and atmosphere is absolutely gut-wrenching and heartbreaking.

One of the most heartbreaking scenes of the film is when Dora goes to the German train station and forces them to stop the train so she can get on. She is sacrificing her freedom and is putting herself in danger so she can be with her family. We then see the reactions of the husband and child. Guido is absolutely devastated, and doesn't want her to go with them. He wants her to be free and not have to worry about her life at the camp. Joshua, on the other hand, is ecstatic that she is joining them. This is so hard to watch as we witness the childhood innocence of Joshua, since he has no idea what is occurring. It makes you hate the Germans even more as you are experiencing these characters we care about being affected.

Instead of exposing the horrors of the concentration camp to his child, Guido turns it into a game. It's on a point system, and he tells Joshua he has to stay hidden to be able to retain and earn points. Guido uses a sense of humor around Joshua and some of the other prisoners at the camps to try and keep their happy and positive spirits. Joshua is aware something is going on, yet he believes and trusts his dad more than anything.

The direction that Benigni goes in for this film is magnificent. We see the hardships and the trauma the Jews have gone through, yet he does it more in a light manner than other films that depict the Holocaust. It is remarkable that Benigni was able to create this film in such a way that you have hope for these characters. You can feel that everything is going to turn out in the hero's favor in the end.

Due to the atmosphere and feelings the movie makes you feel, the ending hits much harder and more emotional than it would have if it was more of a depressing film. We think that someway and somehow Guido and Joshua are going to find Dora and leave the concentration camp as a family. Even as Guido is caught and being led down an alley to his inevitable doom, he catches the eyes of his son. He acts goofy and in a way to make his son laugh so he is not scared. Benigni is so masterful in this scene as that will be the last thing his son sees of his father.

I believe this film isn't about the concentration camps or nazis. I think it's more about the human spirit, and how some situations, no matter how bad, should break your spirit. This is evident in Guido's character. He is about to face his death, yet he still has a positive outlook on his life at the moment and tries to make everyone else feel better. It's such a beautiful film with a beautiful character. This film shows the journey of this father just trying to make the world a better place for his son, and it does absolutely everything right in my opinion.