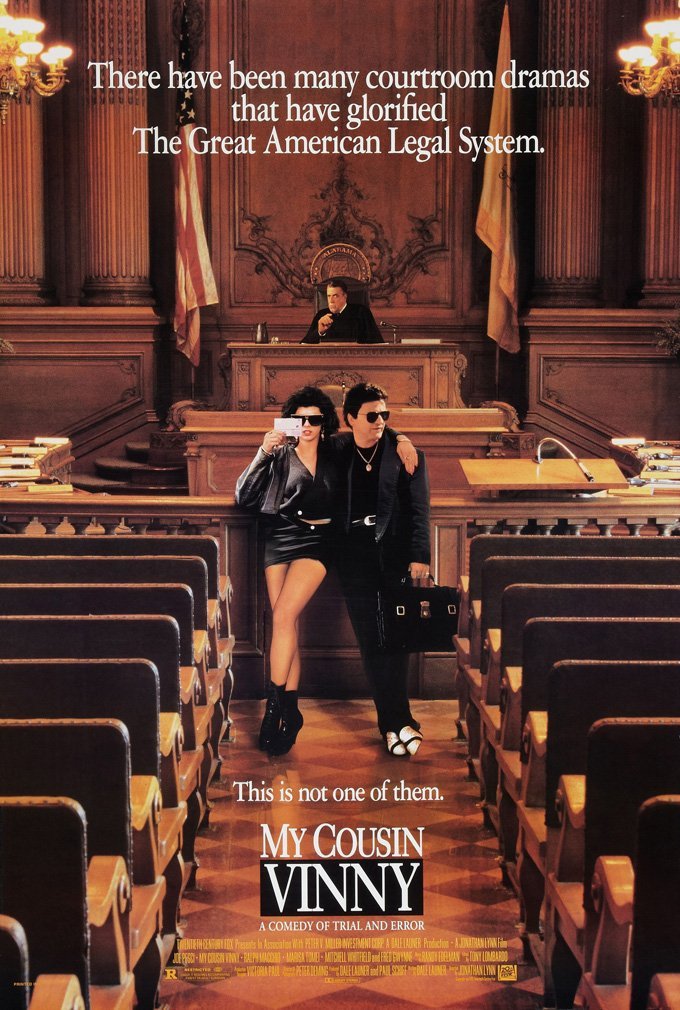 What would you do if you were a teen convicted of a murder you didn't commit? That's the dilemma Billy (Ralph Macchio) and Stan (Mitchell Whitfield) are facing in "My Cousin Vinny". Billy accidentally steals a can of tuna he forgot to pay for, and then is stopped by a cop with a shotgun. It turns out that right after they left the "Sack-O-Suds" convenience store, two boys that look identical to them shot and killed the cashier.

Billy's mom informs him that his cousin Vinny (Joe Pesci) is a lawyer, and will take their case pro-bono. Only thing is that Vinny has only been a lawyer for six months and has had no courtroom experience. The two boys think they are doomed. As the trial begins, Vinny learns how to act in a courtroom and tries to figure out how he's going to win this case. He gets help along the way from his fiery, New York fiancee Mona Lisa (played by Marisa Tomei, who won the Oscar for her role in this film.)

This film is absolutely hilarious from start to finish. There are tons of great gags and jokes, especially from Pesci. Consider the scene where Vinny enters the jail cell to talk to the two boys for the first time. Stan has never met Vinny, and doesn't know what to expect when a leather clad New Yorker walks into his jail cell. He believes Vinny is going to rape him, and it doesn't help that Vinny uses phrases and says things that can be misconstrued the entire time. It is extremely funny watching the interaction between the two, and a good way for the main actors of the film to meet.

The chemistry between Tomei and Pesci is electric and fresh. They bicker and fight the entire film, and then fall asleep in each other's arms while being flirty and acting all lovey-dovey towards one another. The scene where Vinny tells Lisa he's going to go hunting is especially hilarious due to Tomei's over-the-top reaction.

This film does contain scenes that seem too drawn out or unnecessary. At the same time, it also contains scenes that are too short. For example, there is such a long, drawn-out scene leading towards the hunting trio Vinny and D.A. Trotter (Lane Smith) are supposed to go on. However, we don't see the actual hunting scenes at all, and the whole segment is over in a two minute scene.

Pesci is hilarious in almost every film I've seen him in. Even when he's trying to be serious, you just can't help but laugh when he's incredibly over-the-top. This film is a great court comedy, and has perhaps given inspiration for films to come, like "Legally Blonde". We can hope Pesci comes out of retirement to do another great comedy like this. Perhaps they can convince Tomei to co-star with him one again as well.