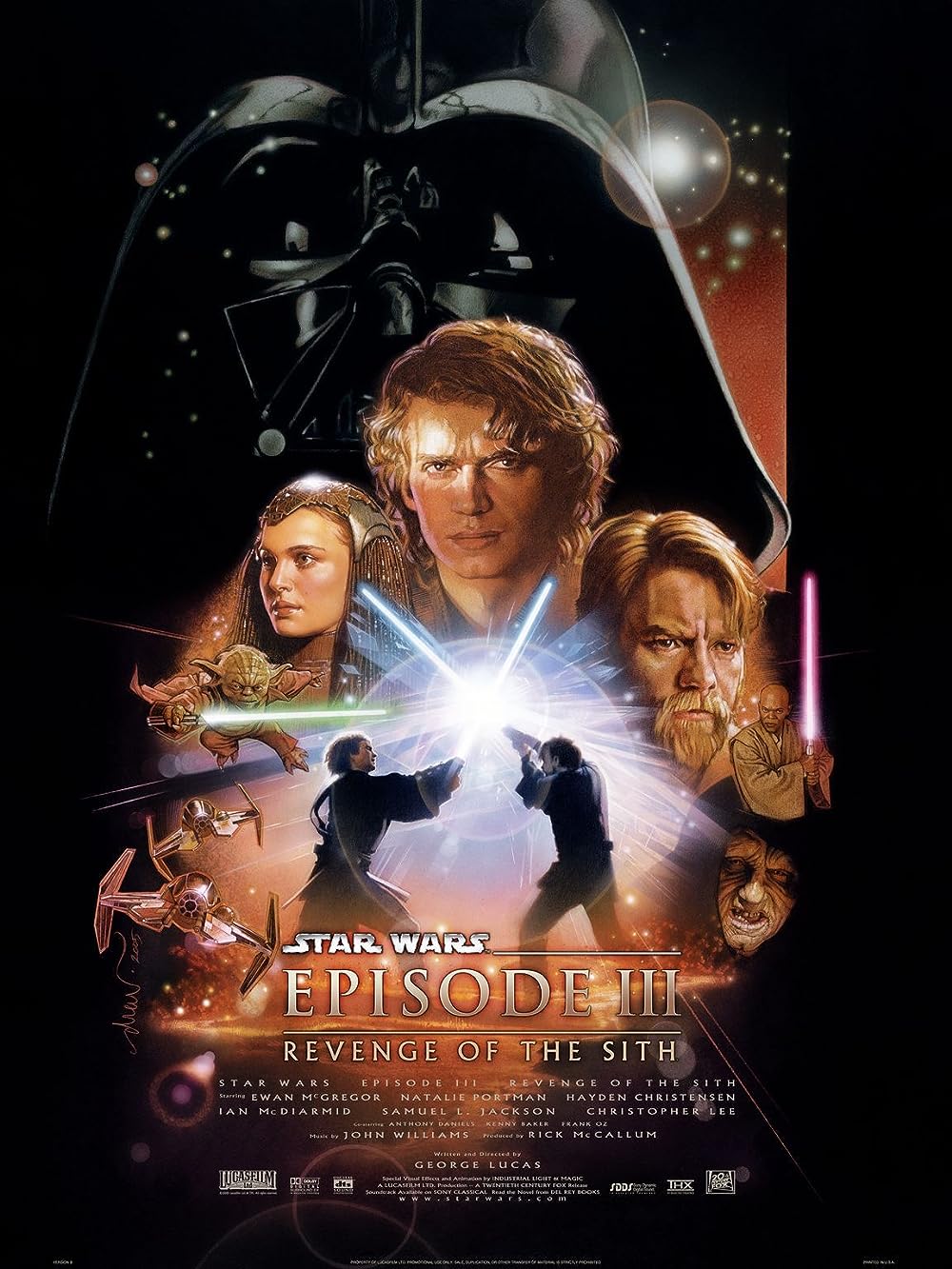 After an extremely disappointing second act in the "Star Wars" prequel trilogy, I'm sure fans were hesitant to go out and see the conclusion of Anakin Skywalker's story. However, writer and director George Lucas steps up his game and delivers such a great film that comes full circle to complete the Anakin Skywalker saga.

Anakin Skywalker (Hayden Christensen) is under a lot of pressure at the start of this film. He beheads Count Dooku (Christopher Lee) at the orders of Chancellor Palpatine (Ian McDiarmid). He knows this isn't the Jedi way, yet easily obeys the order given to him. Upon return to the capital planet, he finds out his wife, Padme (Natalie Portman), is pregnant with their first child. This is forbidden in the Jedi Order, and can get him expelled from the council. He is also asked to join the Jedi Council, but not as a master. Anakin's master, Obi-Wan Kenobi (Ewan McGregor) tries to console him, but Anakin is already full of hate and jealousy. Sounds rough, huh?

Palpatine, who is revealed to be Darth Sidious, uses this to his advantage to try and recruit Anakin to the dark side, which he does successfully. He goes on a murder spree, and ends up becoming one of the most iconic villains of all time - Darth Vader.

Darth Vader is known as one of the most popular villains ever in film history. He is known as being extremely evil and showing no remorse to his victims. However, Lucas is great at directing and writing the film to show the true colors of Anakin. He is not necessarily evil, just misunderstood. I know that is a huge cliché, but somehow it works in this film. You feel bad for the young Jedi, and you actually start to despise both the Jedi and the Sith for forcing this confused young man to choose a side.

The ending of this film is perhaps one of the most emotional moments in Star Wars history. The scene where Padme claims that he is breaking her heart before force choking her is so tragic. What follows is the best lightsaber battle in Star Wars history. The battle between Anakin and Obi-Wan on the planet of Mustafar is absolutely incredible. The cinematography and the coreography is just spot on, and makes you feel the emotions behind the two characters.

It's so tragic watching the relationship of these two men diminish into hatred. We watch them grow with each other into the men they are in that moment. It still hurts every time we hear Anakin yell "I hate you" to his old friend and mentor. They love each other so much, yet they end up broken at the end.

The journey from Anakin Skywalker to Darth Vader is a bumpy road considering film quality, but has a depressing yet satisfying end to the multi-generation saga.