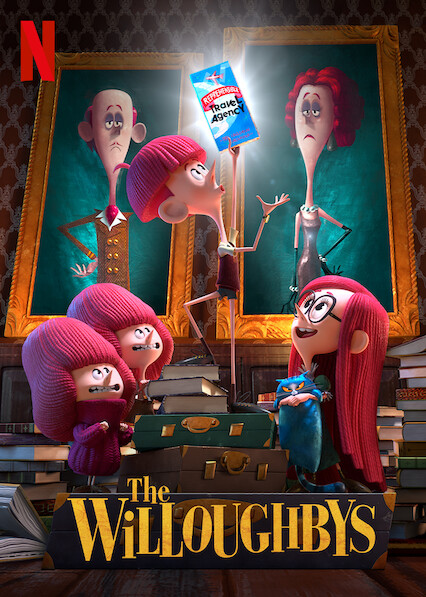 "The Willoughbys" is an odd film. It tries too hard to be a film like "The Addams Family" and "A Series of Unfortunate Events" that is unoriginal and mundane. I found myself multiple times throughout the film rolling my eyes and wondering when this boring and unfunny embarrassment of a film will be over.

The film opens with these two self-centered, horrible people having a child, which they harmfully neglect. From then, they go on to have three more kids, with two of them being twins with the same name. When they find out what orphans are, they trick their parents into going on a vacation to hopefully never see them again. They then realize that being an orphan isn't as cracked up that they thought it would be. They then want to rescue their parents and become a family again.

This film features a spectacular cast, with voice talents of Alessia Cara, Maya Rudolph, Terry Crews, and Ricky Gervais. It just doesn't work though. I did not enjoy a second of this film, and was thankful when the credits rolled.

The entire film is just so unnecessarily dark. Some of the moments in the film, including the scenes of neglect, are just way too dark and harsh for a children's film. One scene that specifically caught me off guard was when they rescued the parents, and the parents steal their flying vessel for themselves, leaving the kids to freeze to death. Who would have thought of a film like this?

The film, even though being undoubtedly bad, has some good positive messages. It shows siblings working together and banding together to save their family. Also, at the end of the film, it shows that blood doesn't make a family. It's uplifting for those going through a situation like this, yet I feel like it goes in the completely wrong way. I was not a fan of this film at all, and felt like it tried way too hard to be something it is not.