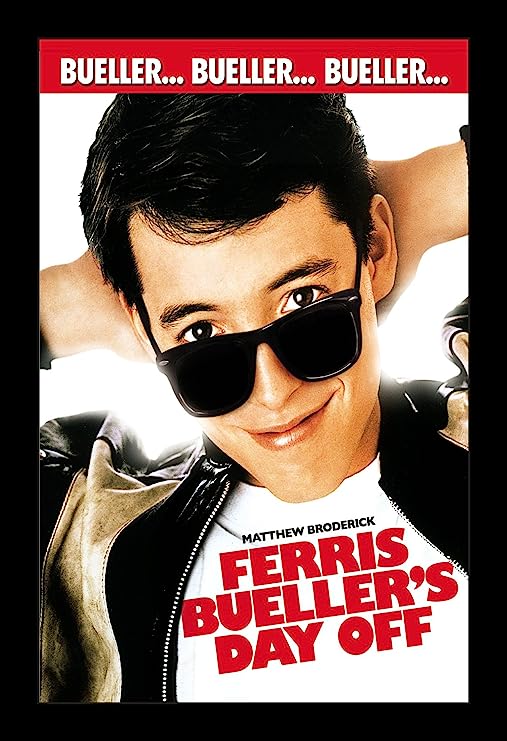 "Ferris Bueller's Day Off" is a very innocent and light-hearted film about a teenager ditching school with his friends. It plays out as a childhood fantasy almost every young boy has - stealing and driving a Ferrari, having a smoking hot girlfriend and best friend who looks up to you, exploring the city, and much more.

Matthew Broderick was born to play Ferris Bueller. He has the charm, the wit, and the confidence of this character just radiating off of him. The chemistry he has with Alan Ruck (who plays his best friend, Cameron) and Mia Sara (who plays his girlfriend Sloane) is incredible and tons of fun throughout the whole movie.

The film is directed by John Hughes, who has directed other teen comedies such as "The Breakfast Club" and "Pretty In Pink". It seems as if all of his movie follow the same plot details, with adults being extremely distant with their children and a huge dilemma that happens within our characters towards the end of the film. This film isn't too original or new since we've seen all of this before in his other movies. He follows this same formula for all of his films, and it gets old after a while.

A big problem I have with this film is how the tone completely changed midway through the film. The movie is happy and comedic, and then out of nowhere, Cameron becomes depressed and tries to drown himself, leading the three teens to have a serious discussion about their lives. This film should have served as a great comedy for teens and adults alike, yet it tries to add in social commentary about teens during this time era.

The film after that has a hard time getting back on track to the happy tone it had previous in the film. IT just seems dreary and depressing after, unlike the scenes where Ferris was performing in the parade. Hughes had a hard time with this in most of his films, and doesn't really understand that his tone changes aren't necessary or make the film better. In the case of this film, it ruined some of the movie for me.

However, with all of that being said, this is still a great film and a very memorable and quotable movie. Audiences of all ages still remember Ferris Bueller running through the backyards to get home in time or him faking his illness to get out of school that day. "Ferris Bueller's Day Off" is perhaps one of the most memorable teen comedies of all time.