"Indiana Jones and the Raiders of the Lost Ark" Film Review 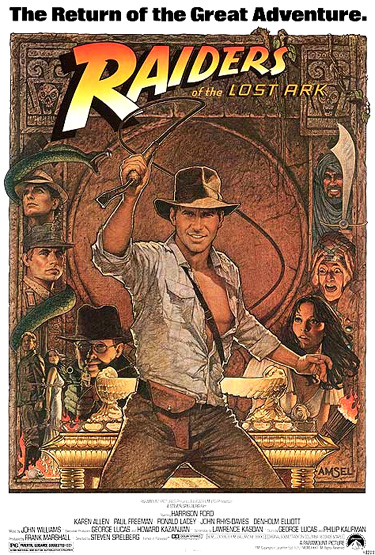 "Indiana Jones and the Raiders of the Lost Ark" Film Review

Fearing the fact his film, "Star Wars", will fail, George Lucas goes on a vacation during the opening weekend with his friend, Steven Spielberg. Spielberg was disappointed after he was declined the chance to make a "James Bond" film. With the fear of "Star Wars" failing and the disappointment behind not having the chance to direct one of the films of his dreams, Lucas and Spielberg come up with the plot of the most famous explorer in movie history - Indiana Jones.

Portrayed perfectly by the talented Harrison Ford, we follow Dr. Jones on his adventure to find and uncover the sacred Ark of the Covenant before the evil Nazi party finds it. He gets help along the way from former flame Marion (Karen Allen) and bumbling, lovable sidekick Sallah (John Rhys-Davies). Along the way, they are chased by the evil Nazis and Indy's rival archaeologist, Dr. René Belloq (Paul Freeman).

This film is tons of fun from start to finish. Indiana goes on many death-defying adventures, with spectacular stunts and choreography done by the cast. The chemistry between Ford's and Allen's characters are incredible, and you love the relationship between the two, strained as it might be.

Perhaps one of the best scenes in cinema takes place within the opening minutes of this film. Jones and an explorer sidekick named Satipo (Alfred Molina) are attempting to recover the Golden Idol. When they safely cross over all the booby traps and dangers that await them, they find the idol on a pedestal  which Indiana replaces with a bag of sand. This causes a chain of events to happen, which ends with a giant boulder attempting to crush our favorite archeologist. The scenes is very well made, and the music excites the audiences. This scene has been one of the most parodied and recreated scenes in film history due to the fact of how fun and well-shot this entire segment is.

It is almost impossible to ever get bored during the entire runtime of this film. Even though it has a great plot, this film simply aims to entertain the audience. It doesn't rely on the audience to have to be able to think or concentrate very hard on what's happening throughout. It keeps you on the edge of your seat with crazy stunts and dangerous chase scenes. Spielberg does an amazing job of creating not just an amazing film, but a whole series of adventures and death-defying stunts that have entertained audiences for over twenty years, with many more years and generations to come.