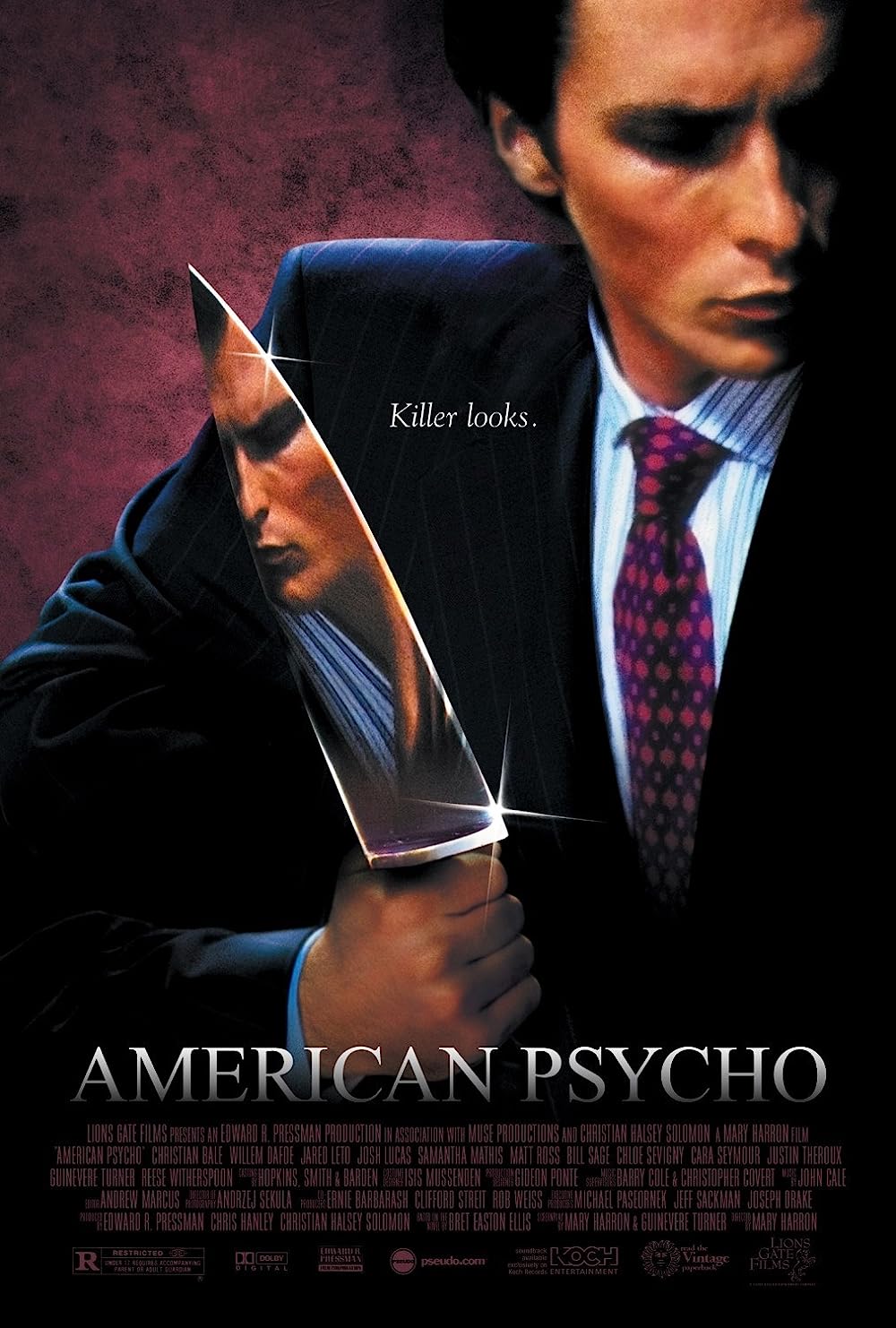 It's crazy to think that a woman was able to direct a film about men's vanity and one man's crazed lust for blood and sex. Yet, Mary Harron was able to create "American Psycho" almost perfectly. Instead of crafting his character as a serial killer who has horrible and twisted motives, she makes this character act out due to male impulses and compulsions that make men who they are today. It terrifyingly all seems very real, meaning the film does its job to both scare and entertain the audience.

The movie follows wealthy businessman Patrick Bateman (Christian Bale), who is a conceited and rude investment banking executive. He is obsessed with his body and skin care, which is shown in a whole segment of him getting ready in the morning, describing all of the products he uses. He spends most of his days bickering with his co-workers (and friends?) about where they should get reservations to that night for dinner and who has the best business card out of the group. However, at night, his real personality comes out, as he kills innocent men and women for his own pleasure. He basks in the glory of brutally murdering every single one of them, and enjoys their blood and insides.

Bale was told by friends to not take this role, as it would ruin his acting career for good. However, Bale was so amazing in this role that this skyrocketed his career, giving him the chance to play such characters as Batman and Dick Cheney. He is so suave and cool, yet creepy at the same time. His character is so clearly messed up, but Bale portrays him in such a way that the viewer can't help but fall under his charm.

This is definitely a character study, falling among the likes of "Taxi Driver" and "Drive". We learn a lot about this character throughout the whole runtime, and it's terrifying to think that some businessmen could actually be like this. Harron made a great decision to make him an unreliable narrator as well, to help show what kind of man this is and how sick in the head he truly is. Consider the scene where Bateman thinks the ATM machine is telling him to feed it a stray cat, which he then picks up and tries to kill by feeding it into the machine. It really makes us question whether anything we saw throughout the movie is true or not.

The movie, essentially, just does a great job of making the audience truly disturbed and grossed out. Let's take the infamous threesome scene between Bateman and the prostitutes he picked up that night. We get shots of them having sex, but Bateman is only concerned with how he looks, rather than focusing on the beauty of the other girls. He somehow harms them after, but we don't know how. Then, later on in the film, he picks up one of the same prostitutes, who he then brutally murders after a night of rough sex by dropping a chainsaw on her head. Both segments with this prostitute character are just so well shot because they make the viewer feel truly disturbed, as well as scaring them by wondering if people can actually be like this.

Even though I mentioned how the film's use of the unreliable narrator was a great decision, I feel like they make this decision too late into the movie, and it feels like the ending was rushed. The movie just suddenly ends out of nowhere, and the viewer is now left with all of these questions that the film didn't answer. I'm sure Harron intended this to make the viewer think more about what they just watched, but I think they should have tied up the film nicer, and answer a lot of questions left unanswered.

Overall, I think this movie does an amazing job of showing the toxicity and dangers of male masculinity and vanity. Bateman is this terrifying psychopath that makes viewers really think of their own personality, and wonder if they are similar to this horrible character or not. Like mentioned above, I don't think this film could have worked with a male director. I think the decision to have a female director make this film was a great one as Harron really analyzed men and their personalities in a way a man could never have done.