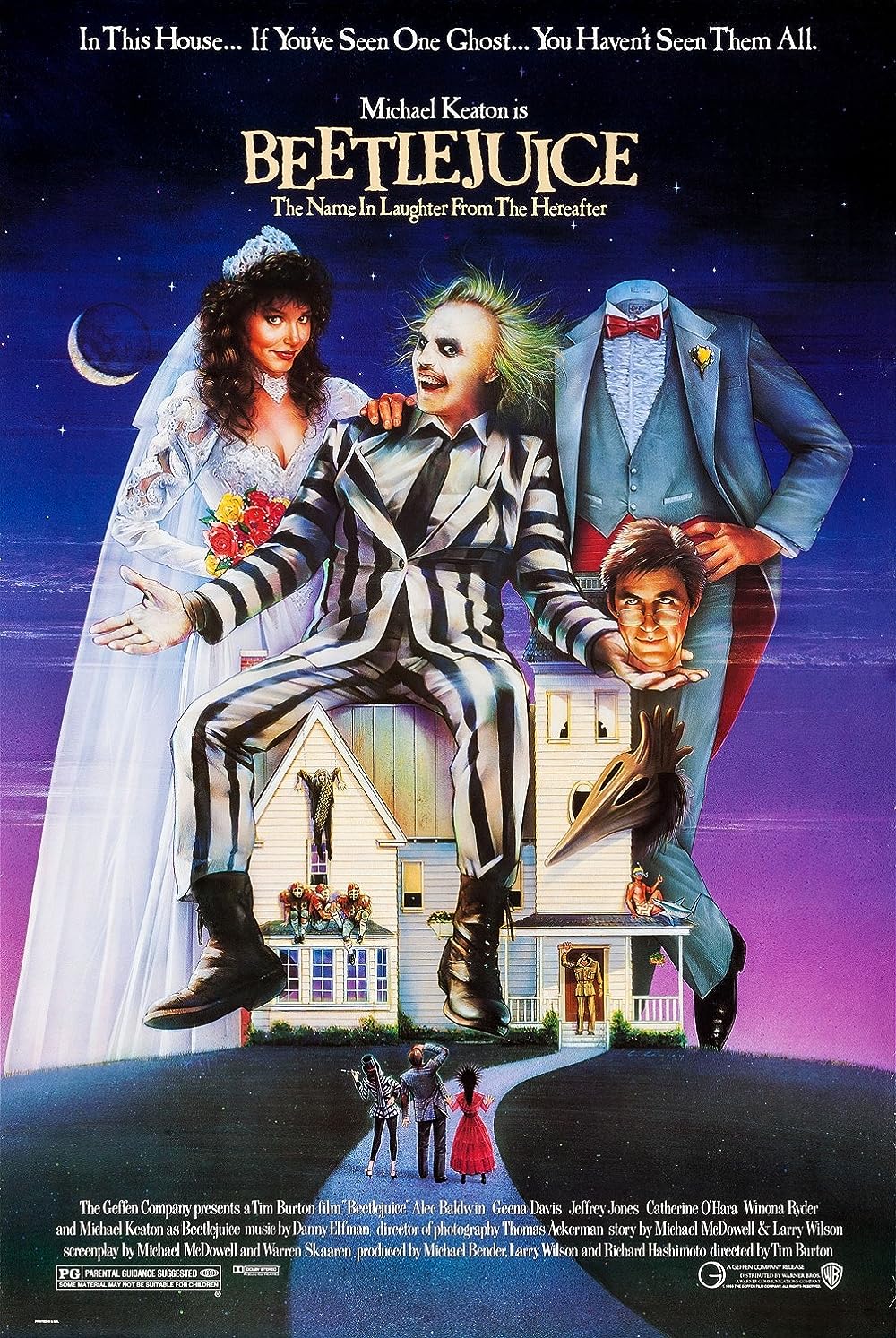 Tim Burton is one of the most well-known directors of today. Everyone knows his classics, such as "Edward Scissorhands" and "The Nightmare Before Christmas", as well as his more odd films, like "Corpse Bride" and "Charlie and the Chocolate Factory". However, before those movies captivated audiences, Burton made a film called "Beetlejuice", which is one of the most famous family Halloween films of all time.

The movie opens with a couple, named Adam (Alec Baldwin) and Barbara (Geena Davis), madly in love. However, after a freak accident, they end up driving into a river, killing both of them. Now apart of the dead, they are forced to live in the house that they lived in when they were alive, which they happily oblige. However, they are appalled to find that a new (and annoying) family (Winona Ryder, Jeffrey Jones, Catherine O'Hara) has moved into their house, and are trying to change everything they can about the house, undoing all of the hard work the now-deceased couple put in.

So, they decide to try and scare the new family, with the help of the new couple's friendly, yet distraught daughter, Lydia (Ryder). When it doesn't go to plan, and the new couple are fascinated by the spirits that inhabit the house, they are tempted to call on Betelgeuse (Michael Keaton), a crude and disgusting ghost that specializes in "exorcisms of the living". When Betelgeuse decides to take over, everything goes wrong, causing Adam and Barbara trying to save both Lydia and her family.

This film is what helped put Burton on the map, giving him the reputation of having weird and bizarre sets and plot lines in his films. Before this, he had directed "Pee-Wee's Big Adventure", which is already odd. But, nothing as odd as this. Who would've thought a disgusting and crude ghost would be such a hit?

However, even though the bad ghost inspires the name of the movie, he is not used as much as you would think. He kind of sits in the background for most of the film, only really coming out towards the end of the film. And even then, the ending is wrapped up very quickly and seems very rushed, which isn't a good sendoff for the film or the characters.

The characters are also very interesting, and a lot of fun. Ryder has great on-screen chemistry with both Baldwin and Davis, and it looks like the actors genuinely had a lot of fun shooting this movie. Take the scene for example where Adam and Barbara are trying to scare the family by putting sheets over their head, and moaning like ghosts (which was also a great use of cheeky innuendo). It's just really funny, and it seems like everyone had a great time making this film.

The film does have some great moments though, like the dinner scene where the guests are all forced to sing and dance. Along with that, there are some great comedic moments. But, Betelgeuse really steals the scene whenever he is present, and it is a pity we didn't see him more throughout the movie.

This movie is a lot of fun, and definitely a great family film to watch for the Halloween season. There are rumors that there will be a second film being made, with both Burton and Keaton to return. I have my fingers crossed we will get to see this sequel, as well as hoping to see Betelgeuse much more in this new movie.