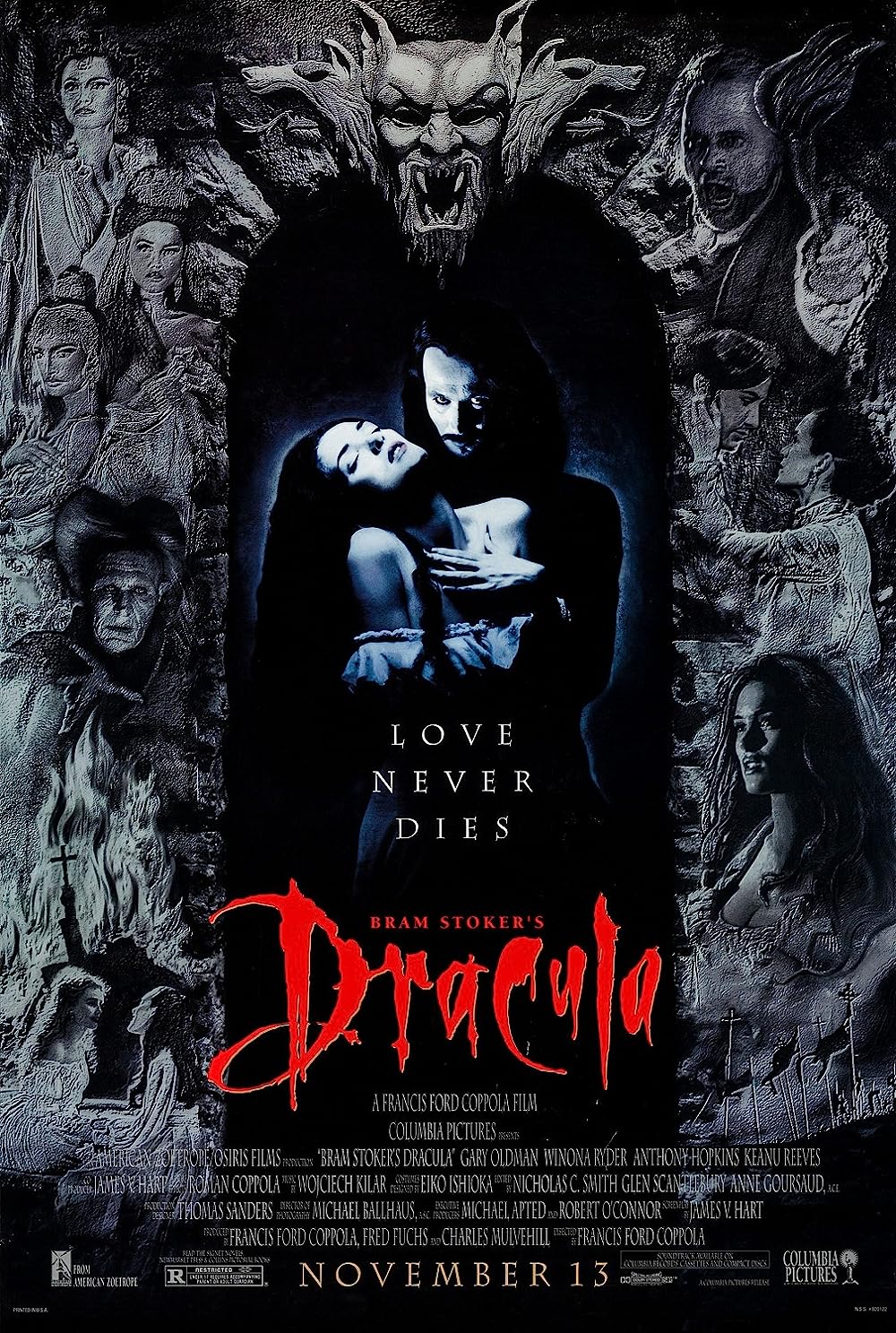 After successfully becoming one of the most famous and critically acclaimed directors, Francis Ford Coppola decided he wanted to have a turn to make a film about one of the most well known monsters - Dracula. Even though "The Godfather" and "Apocalypse Now" are considered some of the best movies ever made, his 1992 film, "Bram Stoker's Dracula" was a huge disappointment compared to his other films, relying mostly on Gary Oldman to carry this mess of a film.

The film follows the basic storyline every Dracula film follows - Dracula moving to England and terrorizing the town, especially one unlucky maiden that he falls in love with. However, this time, Dracula (Gary Oldman) falls in love with his realtor's (Keanu Reeves) fiancee, Mina Murray (Winona Ryder). After falling under his spell, Mina is assisted by Jonathan (Reeves) and friends as they try to destroy the evil vampire once and for all.

In my opinion, Oldman seems to be the only actor who gives a great performance in this film. He is creepy as hell, and he plays a whole range of characters - young Dracula, old Dracula, a werewolf, etc. He goes above and beyond in his portrayal of these characters, and really leaves it all on the line in this film. However, by saying that, I find both Reeve's and Ryder's performances hard to take seriously, and they were laughable. Reeves was just coming off of his "Bill and Ted" films, so he still had that stupid, quirky attitude about him. He hadn't grown into his badass on-screen hero like we see in films such as "Speed" and the "John Wick" franchise. Ryder's performance was more disappointing, however, as she had done a series of great roles before participating in this horrendous film.

The movie is a bit creepy, but it's shadowed by the boring plot lines and unnecessary sex scenes. The film moves at a rather slow pace (which I guess is fitting for a film about an old and decrepit vampire), and this makes it worse when the ending is rushed with barely no fight from the vampire. In addition to that, there are so many odd and uncomfortable sex scenes that could have been omitted from the finished product of this movie. Consider the two scenes where Reeve's character is practically raped by a series of blood-thirsty vampires and when Dracula, disguised as a werewolf, has rough sex with a woman who is screaming in a graveyard of all places. It is very odd and hard to watch at times, and extremely unnecessary to tell the story of Dracula.

Whatever happened to the magic and charm of the old 1931 "Dracula"? I personally think Bela Lugosi as Dracula and Dwight Frye as Renfield were much creepier than this oddball of a horror film, and I'd take their film over this monstrosity anyways. Perhaps Coppola should just stick to epic films, and leave the horror genre for other directors to worry about.