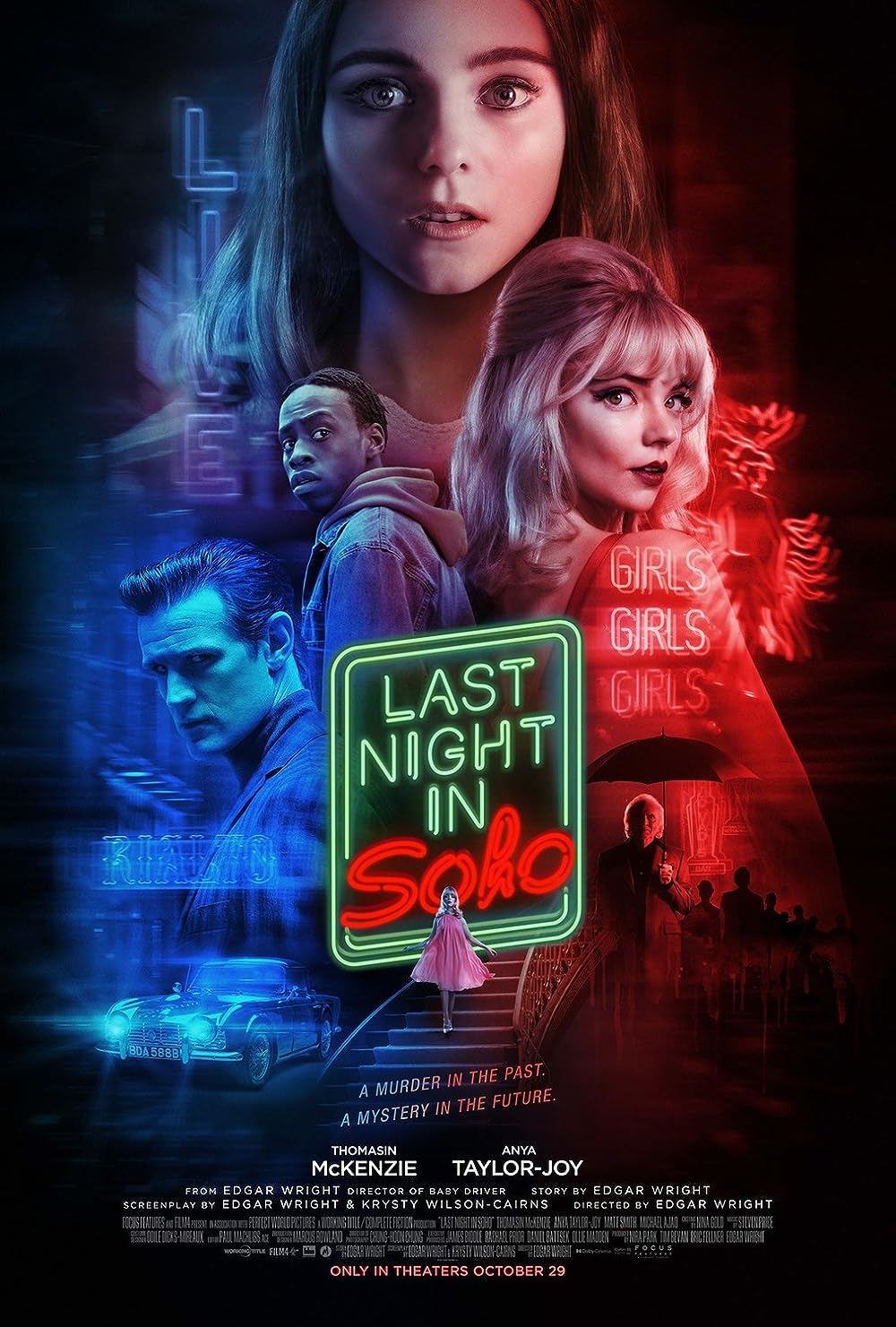 After numerous delays due to the Covid-19 pandemic in 2020, Edgar Wright's new film, "Last Night in Soho" is finally here. Fans of Wright's previous films were intrigued by the multiple trailers, which was presented as a scarier, more serious film compared to other entries in Wright's filmography. I can certainly say that this film was worth the wait, and what we received is a brilliant horror film that will stick with the viewers for days to come.

The film opens with a girl named Eloise (Thomasin McKenzie), who we learn has the ability to see the deceased. She has been able to see her mom ever since she killed herself when Eloise was a little girl. After seeing her mom in the mirror while dancing around her room, her grandma comes home with an acceptance letter from a college in London that Eloise applied to.

Excited to start her new life in the big city of London, Eloise quickly packs and heads out the next day. Yet, when she gets to London, it's not what she imagined, with her roommate (Synnove Karlsen) being a nightmare and feeling truly alone in the big city. She decides to move out of the dorms, and into a small little apartment that is owned by a sweet, little old lady.

However, when spending the first night in her room, she dreams of a young singer named Sandy (Anya Taylor-Joy), who is trying to make a name for herself in 1960's London. Throughout the rest of the film, she follows Sandy, who is then brutally murdered by the hands of her boyfriend, Jack (Matt Smith). While being haunted by the ghosts and demons from the dreams, she tries to find the real Jack, and bring him down once and for all.

The film is absolutely beautiful shot. Throughout the film, we see the interactions that Eloise has with Sandy, even though Sandy can't hear or see Eloise. They achieve this by using many mirror shots to switch back and forth between the two girls. At the same time, they really capture the time of the 60's, transporting the viewer back to this beautiful time era. Like films such as Tarantino's "Once Upon A Time In Hollywood", the viewer actually feels like our characters are living in this time era, even though the films take place almost 60 years ago.

The cinematography works wonderfully with the masterful story that was crafted by Wright, who makes the viewer feel genuinely scared in certain moments and filling them with dread. The movie is very intense, and at times hard to watch. This is a fresh and new storyline from Wright, who has previously made action films and comedies. I was a little worried about how this film would do, being his first horror film, but I think he did an excellent job at really scaring and engaging the viewer.

Another thing that makes this movie so special is the stellar soundtrack. It consists of songs from London during the 60's. It is perhaps the perfect soundtrack for this movie. It fits every mood that the film conveys, and really sells the idea that this film is taking place way back when.

I personally think our two main actresses are absolutely perfect for the roles they play. McKenzie does an amazing job at playing this innocent, sheltered girl who is both frightened and intrigued at the prospects of London. Then we have Taylor-Joy, who is the complete opposite. She is flirty, bold, outgoing, and so much more. Everything she displays about her character is sex-appeal, even though it's all just an act. The two characters serve as foils for one another, and I think they both did an amazing job bringing these hauntingly beautiful characters to life.

I think this could possibly be one of Wright's best films. He does an excellent job creating the necessary horror and suspense for this film, as well as creating a film only he could create. I certainly hope we get more horror or thriller movies from him as I think he has much more in store for his audiences.