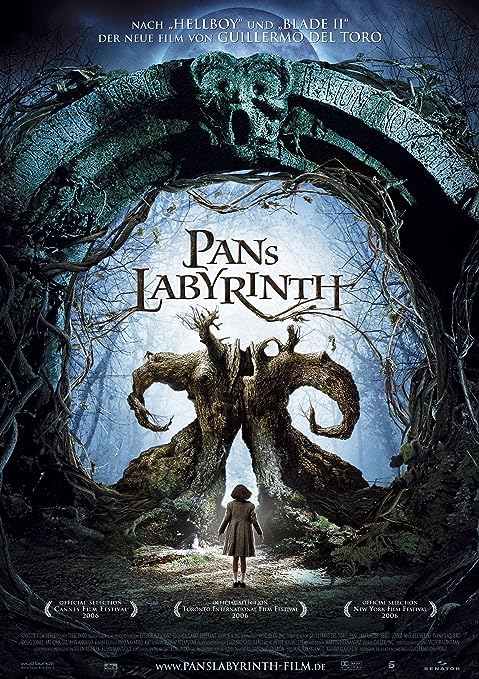 Coming off the success of the first "Hellboy" movie, Guillermo Del Toro turned to the fantasy genre to write and direct "Pan's Labyrinth". The film, which follows young Ofelia (Ivana Baquero), combines the fantasy genre with war, showing the terrifying nature of both genres.

When Ofelia's mother, Carmen (Ariadna Gil), marries terrifying Captain Vidal (Sergi Lopez), they move in with him in his gloomy and depressing headquarters. Carmen is extremely pregnant with Vidal's child, forcing Ofelia to help take care of her ailing mother. When she follows a fairy one night, she encounters a faun (Doug Jones, who also plays the horrifying Pale Man in the middle of the film), who informs her that she's the lost princess of the Underworld. He tasks her with three challenges to prove her worth, that involve her to venture into the dangers of the real and fantasy world.

Del Toro is incredible at capturing the imagination and terror of both worlds. The war-stricken Spain is terrifying due to the amount of evil in the hearts of the cruel soldiers and war generals. The fantasy world, on the other hand, is full of both good and bad monsters. I assume Del Toro is symbolizing the real world in his fantasy world, yet the fantasy world is much easier to distinguish the good guys from the villains.

Doug Jones does an incredible job at playing both the Faun in the labyrinth and the Pale Man from the second task. The Faun's appearance is horrifying, yet we don't feel scared by him at all. We rather feel drawn towards the mythical creature, with the promise of sanctuary from the war and killing. The Pale Man, on the other hand, is perhaps one of the scariest creatures ever shot in a fantasy film. The fact his eyes are in the palms of his hands gives the viewers the creeps.

The movie just seems to run on a bit too long. There were a few scenes that seemed to drag, with no end in sight. It felt like Del Toro was more concerned with the real world and the war rather than the fantasy world the film promotes. I would have definitely enjoyed the movie more if there were more scenes and plot details that take place in the labyrinth, rather than the war. However, with that being said, I must mention that Mercedes (Maribel Verdu), who is the servant to Videl, is a great character and perhaps the best in the real world.

The film's ending is definitely left to the viewer's interpretation. Is the fantasy world real, or is it simply the beautiful and intricate imagination of a young child? There is no right answer, and we are left wanting to believe in the happy ending. Whether the film ends happily or not, there's no doubt that Del Toro made a great, fantastical film that will live on as an important film in the fantasy genre forever.