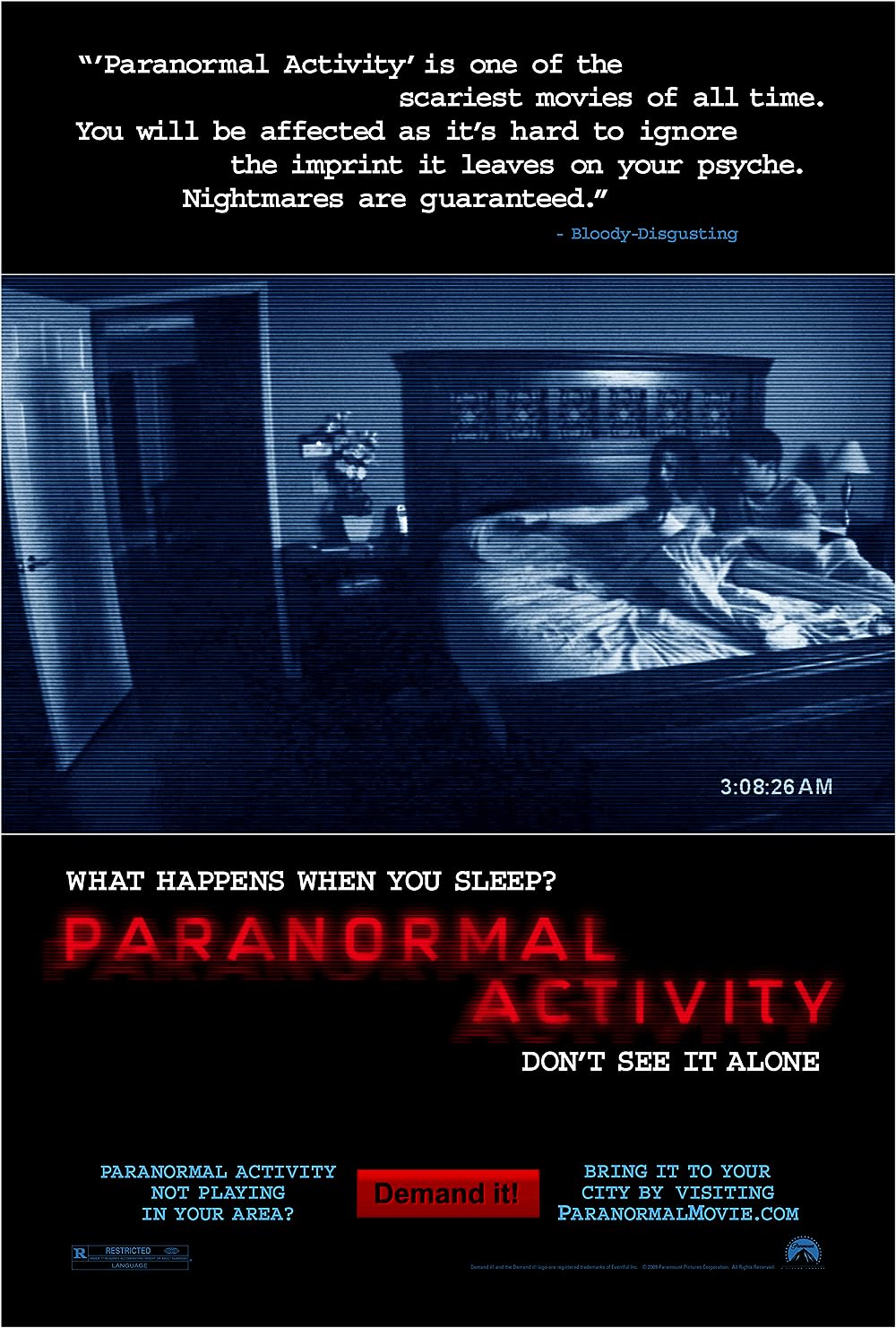 What is perhaps the scariest thing to happen to someone? There can be a million different answers depending on who you ask. But one of the most common answers would have to deal with being possessed or haunted by a ghost or a demonic entity. Even though numerous films have been made about haunted houses and spirit possessions, undoubtedly one of the scariest of all time is Oren Peli's 2007 film, "Paranormal Activity", which relies on found footage to tell the story of a couple possessed by a demon.

The movie opens with a man testing out a new camera he had just bought. This man, Micah (Micah Sloat), then runs out to greet his girlfriend, Katie (Katie Featherston) as she pulls into the driveway. What started as a somewhat light and comedic film then turns dark very fast, as we find out that Micah has purchased this camera to try and catch ghost-like presence while they sleep.

We then later find out that Katie has been dealing with a demon since she was young, and it has followed her wherever she goes. This kind of sets up the dread the viewer has, now knowing it is a demon rather than a ghost. The movie then goes on to show us footage of the couple sleeping, with many terrifying and unexplained things happening during the night, as the demon is trying to possess Katie and take her forever.

This film is perhaps one of the scariest I have ever seen. Unlike these big-budget horror films being produced today, this one relies simply on the viewer's imagination and their perspective of what is going on in the house at night (and sometimes during the day). But, at the same time, the filmmakers do an excellent job filling the viewer with dread and horror throughout these numerous scenes in the film. They like to linger on certain moments, making the viewer get more tense and scared as we have been viewing the same thing for about twenty seconds now and nothing has happened. This makes it even worse as we have a small timer on the bottom right corner of the screen, painfully showing every excruciating second that passes in this terrifying sequence.

What's great is that when the film decides to do something scary, they don't have to rely on huge special effects or jump scares. Consider perhaps one of the most terrifying scenes in the film; Katie is sleeping when she is suddenly pulled out of bed by the demon and dragged down the hallway. The camera is stationary, so we just have to sit and watch all of this happening. She then lets out a blood-curdling scream, which wakes up Micah, who then runs after her. We didn't see what was dragging her, but we didn't need to. We, as the viewer, simply just imagine what is dragging her, and that is probably more terrifying than actually seeing the demonic entity in the film.

But the thing that really drives this movie home is that everything in this movie could really happen. There have been thousands upon thousands of reports of spirits in houses or demonic possessions. It's absolutely terrifying to think about, and this movie doesn't alleviate our fears by showing a more real-world account of these horrifying events, compared to the glitz and glamor in big-budget, Hollywood horror films.

This movie is really the "Blair Witch Project" of modern years, dealing with a demonic possession rather than a witch in the woods. It works perfectly to convey this story in such a terrifying and unique way that it will sit with the viewer days, perhaps weeks after viewing for the first time, scared of what could happen to them in their own house.