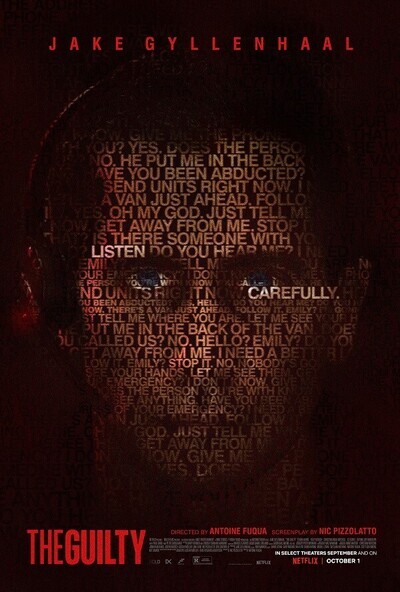 Antoine Fuqua's newest film, "The Guilty" is surrounded by mystery. The opening sequence shows our protagonist, Joe Baylor (Jake Gylenhaal), working a late night shift as a 9-1-1 operator. He receives a call from a news reporter, asking him to comment on a court trial we know nothing about. He also seems estranged from his wife and daughter for unknown circumstances. Throughout the rest of the hour and a half runtime, new revelations come to light while he attempts to save a woman who was kidnapped by her abusive ex-husband in this fast-paced, exciting new thriller.

The woman caller is named Emily, who said her ex-husband has kidnapped her and is going to kill her. Since she is trying to hide the fact that she's calling 9-1-1 from her ex, Joe has to figure out a way to talk to her without making it too obvious. However, Joe has a hard time getting help, as well as having to deal with his own personal demons.

The film is excellently shot. The movie was shot in only eleven days due to the Covid-19 pandemic, and features Gylenhaal on a phone call for most of the movie. The camera mainly focuses on his face throughout the entire runtime, so everything that is conveyed emotionally throughout the movie has to be through his facial expressions. And I can say that Gylenhaal did an absolutely amazing job. He is so good at shifting through different emotions and can make the viewer feel how he's feeling.

It's also amazing how the movie can keep you on the edge of your seat, without actually seeing any violence or action. The movie could have been very boring and slow, but Fuqua does a great job of keeping the viewer engaged and anticipating what is to come next.

There are some parts of the movie, however, that don't seem to fit in the context of the story. For example, when Joe is trying to get help finding the missing woman, he interacts and jokes around with one of the police officers that picks up the phone. It seems like a very inappropriate time to be joking around as he is trying to find a woman who was abducted. Also, the reluctance the other officers have to finding the woman just seems very strange to me, as you would think they would want to find a missing woman who is about to be murdered.

The film has excellent twists and turns, with a great plot twist towards the end of the movie. It does an excellent job of wrapping itself all up at the end, leaving no question unanswered. This is a massive feat for a movie that's only an hour and a half long, as they presented so many unanswered questions in the first ten minutes. I applaud the efforts of Gylenhaal and Fuqua, and I think they did an excellent job creating their vision for this cinematic experience.