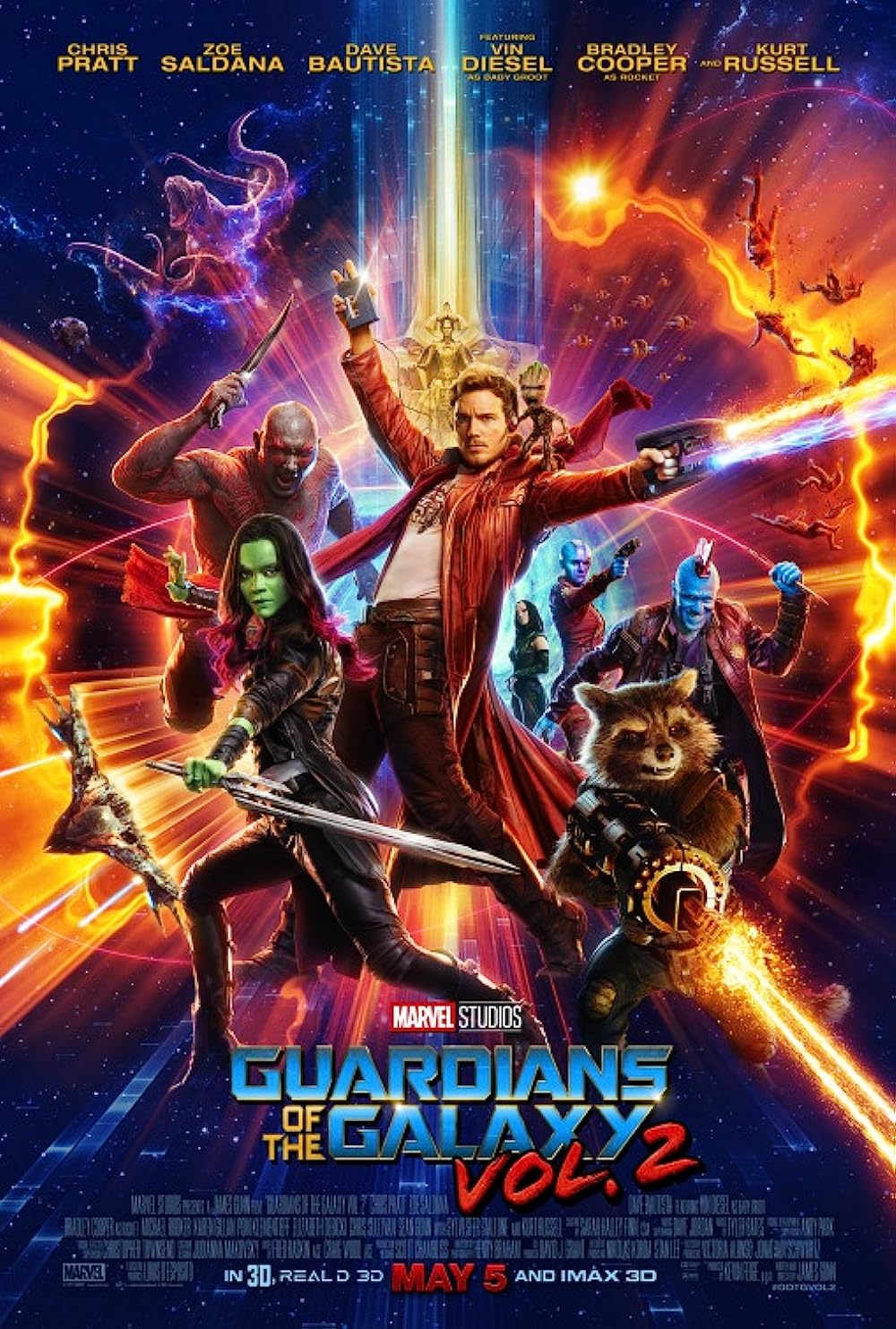 Marvel really surprised fans in 2014 by releasing "Guardians of the Galaxy", which was massively successful among fans and critics alike. James Gunn was able to bring these odd characters to screen, and somehow was able to get the perfect cast with the perfect story. Therefore, because of this, Gunn had a lot of pressure on him to create a sequel that is as good as the original, and I think he successfully achieved that in this hilarious sequel that explores more into Peter Quill's parentage.

Ever since the event of the original film, the Guardians (Chris Pratt, Zoe Saldana, Dave Bautista, Bradley Cooper, Vin Diesel) have been doing mission after mission, reaping the rewards from those who pay high dollar amounts for their services. However, during one of their missions, Rocket Raccoon steals some of the valuable batteries that the Sovereign, a race of yellow-people, have, leading them to follow and ultimately destroy the Guardians' ship.

Now stranded on an unknown planet, our favorite galaxy heroes have no clue what they're going to do. As they start to make plans to fix their ship, a massive ship flies down, with an older man walking out of it when it lands. He reveals himself as Ego (Kurt Russell), and says he is Peter's long-lost father. When he invites them to his planet, Peter, Gamora, and Drax all follow, leaving Rocket and Baby Groot behind. However, Rocket and Groot are pursued by Yondu (Michael Rooker) and his Ravagers, while Peter and the other Guardians discover that everything Ego is saying may not be true, and Peter may have a psychopath as a father.

Just like the first film, this movie is hilarious and a whole lot of fun. All the main actors have amazing chemistry with one another, and are able to bounce jokes off one another. This movie definitely shows a more humorous side to our characters, especially Drax, who was a more serious character in the first installment.

This movie isn't as action-packed as the first movie, but the action and CGI are great in this film. This movie even includes one of the best shots in the MCU, with all of the Guardians banning together on the evil planet to take down Peter's horrible father. Then, in perfect timing, the beautiful shot is ruined by Mantis (Pom Klementieff) getting hit with a massive rock. It was a perfect scene for the film, as it shows the beauty of the planets in this movie, as well as including the humor this series is known for.

As well as being one of the funniest films in the MCU, it also packs a very emotional punch for our heroes. It is perfectly balanced and I think gives an amazing send-off to one of the amazing characters in this movie. It's beautiful in a way as it shows each characters' progress dealing with what happened, showing that at its core, these badass, hilarious heroes still have emotions and feelings as well. It was just amazingly written by Gunn.

Overall, I think this movie is a perfect way to follow up the success of the first film. This movie has its haters, saying that this movie didn't live up to its full potential. I personally disagree, as I think this film is a fantastic sequel, and I can't wait for the next Guardians outing.