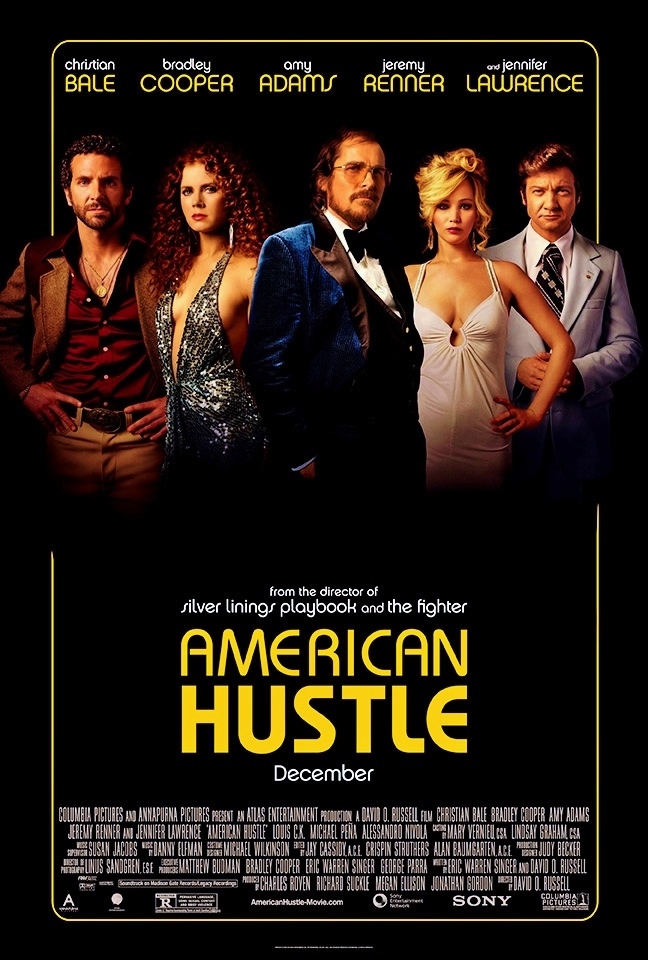 David O. Russell had already established himself as a big time director by the time his movie, "American Hustle", came out. He had worked with the likes of George Clooney, Christian Bale, Jennifer Lawrence, Bradley Cooper, and many more to make fascinating character studies about very different characters throughout his career. However, I would say this film is perhaps his best film he's made so far as it combines stellar acting with a fun, fast-paced plot.

The movie starts off with con-man Irving Rosenfeld (Christian Bale) meeting a seductive woman, Sydney Prosser (Amy Adams). He falls head over heels for her, and they start a relationship together, both romantically and professionally. With Prosser's help, they become very rich conning people out of their money. However, there is one major problem, Rosenfeld is married to a young, prima donna named Rosalyn (Jennifer Lawrence), and the two share a son together.

When Rosenfeld and Prosser are forced to work for FBI agent, Richie DiMaso (Bradley Cooper), they reluctantly try to track down the Mafia and Jersey powerbrokers, including mayor Carmine Polito (Jeremy Renner). As they get deeper and deeper involved into the investigation, tensions run high as they are unsure of who to trust, as well as all of them trying to save their own necks at the same time.

The casting for this movie is absolutely brilliant. Each actor in this film plays their role to perfection, and really captures the mood of the time era. They all have fantastic chemistry with one another, and are able to be comedic and serious at the same exact time. Tensions run high between all the characters, and you can feel this throughout the movie due to the performances given.

This film feels very much like a Martin Scorsese movie, and I think Russell did a very good job giving off that vibe. He uses narration, gangsters, and the addition of Robert De Niro to make this feel like an authentic mafia film. I think that in a way, Russell was able to achieve many things that Scorsese wasn't able to before in his films. Sure, the mafia violence and tension is there in both of the directors' works, but this film is able to find that perfect balance of comedy with seriousness. He is able to make the characters more relatable than Scorsese's in a way. This is not hating on any of Scorsese's work at all, since he is a cinematic genius in his own right, but I think this film is much more enjoyable and fun to watch compared to some entries in Scorsese's filmography.

The cinematography and costume design for this film are great as well. The characters don't even have to talk or do anything in certain scenes as the camera movements and costuming of our characters can move the plot forward. This movie literally brings the viewer back into the late 1970's, and the viewer doesn't want to leave when the credits roll.

Overall, I think Russell really outdid himself with this film, and I think it could be hard for him to make a film better than this. He was able to combine the right cast with the right story to make this film very enjoyable and fun, in both a comedic sense combined with a serious tone.