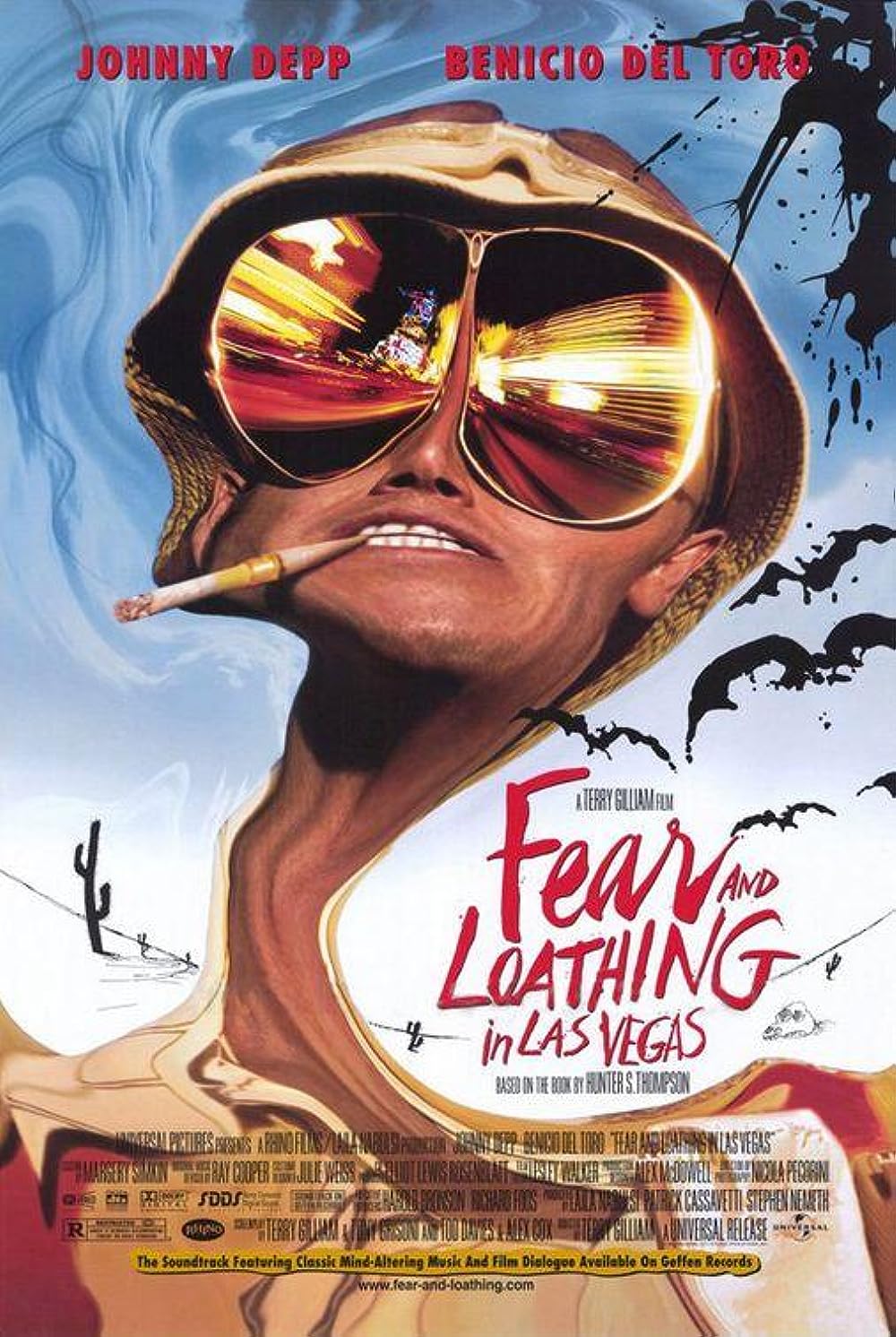 "Fear and Loathing in Las Vegas" is perhaps one of the most drug-filled trips you will possibly ever take in cinema. Johnny Depp and Benicio del Toro takes the viewer on a journey throughout the nightlife of Las Vegas, showing the effects that drugs have on both the mind and body. This film is definitely not for everyone, and I think it is perhaps one of those movies that you either love or hate. For me, I think this film is a work of comedic geniuses, and the entire movie is a fascinating, entertaining, and sometimes terrifying adventure from start to finish.

The movie follows Raoul Duke (Depp), who is the alter-ego of the book's author, Hunter S. Thompson. Duke is a journalist, and he is tasked to go to Las Vegas to cover the famous motorbike race that takes place in the desert. However, with his psychopathic attorney, Dr. Gonzo (del Toro), in tow, things take a massive turn as they binge on drugs and alcohol the entire time that they are in Sin City, causing them to get into massive trouble that they hadn't expected before.

This film is an experience, rather than a story driven by its plot. It seems like the plot isn't going anywhere in many places throughout the film, and maybe it's not going anywhere. Maybe this film solely exists to show the affect drugs has on our two main characters, which is both entertaining and frightening at the same time.

Perhaps that is a main reason why many people don't appreciate this film for what it is. Many people want a story driven film, and can't let a film just stand on its own and document a couple days in the life of these drug addicts. I definitely think the movie does a very good job evolving these characters, changing them as the movie progresses. They never resolve their drug addiction problem, or even portray them in a heroic light, but our characters have changed so much from the start of the movie to when the credits roll.

This movie contains perhaps one of the most Johnny Depp-ish performances of all time. If you have never seen a film starring Depp, you will have no clue what I'm talking about. But, when you think about Depp and his mannerisms, films like the "Pirates of the Caribbean" franchise comes to mind, right? I think his performance as Duke is basically Captain Jack Sparrow on cocaine, which I'm sure is a very accurate representation of this character.

Like many of the characters he plays, Depp is very likable and a lot of fun to watch on-screen. He does an excellent job playing the role of a druggie, and you can believe everything he is saying or showing on the screen. It's hard to hate his character, despite all of his horrible habits and cruel ways. He even comes up with the idea of drugging and sodomizing an innocent girl to just make some quick cash. He is, in essence, a horrible person, yet we cannot bring ourselves to dislike his character.

Del Toro also gives a fabulous performance, and is perhaps more over the top than Depp is. He is a crazy person in many of the movie he plays, but this film takes it to a whole new extreme. He is terrifying in a way that only del Toro can be terrifying in. I think him and Depp have the perfect chemistry for this type of film, and it really works in the final product.

The cinematography and excellent directing by Terry Gilliam gives this film a vibe that Depp and del Toro fit perfectly. The camera angles and shots from this movie make everything much more chilling and deprived. It fits the climate and setting of Vegas perfectly, and I think is a big factor as this movie moves forward. Take the opening scene of this film for instance. The beautiful shots of Duke driving the infamous convertible is beautiful, and then it's combined with a near perfect shot of "bats" flying above head. I think this is another great way that the directing and cinematography go hand in hand - you can't believe anything our unreliable narrator is saying. He can't separate fiction from reality, so the viewer will essentially never know what is real and what is fake. Perhaps that is the charm of this film, and the reason this movie is debated and talked about twenty plus years later. I can say with confidence that this is an excellent dark comedy, and it would be intriguing see Depp take on more of these roles in the future.