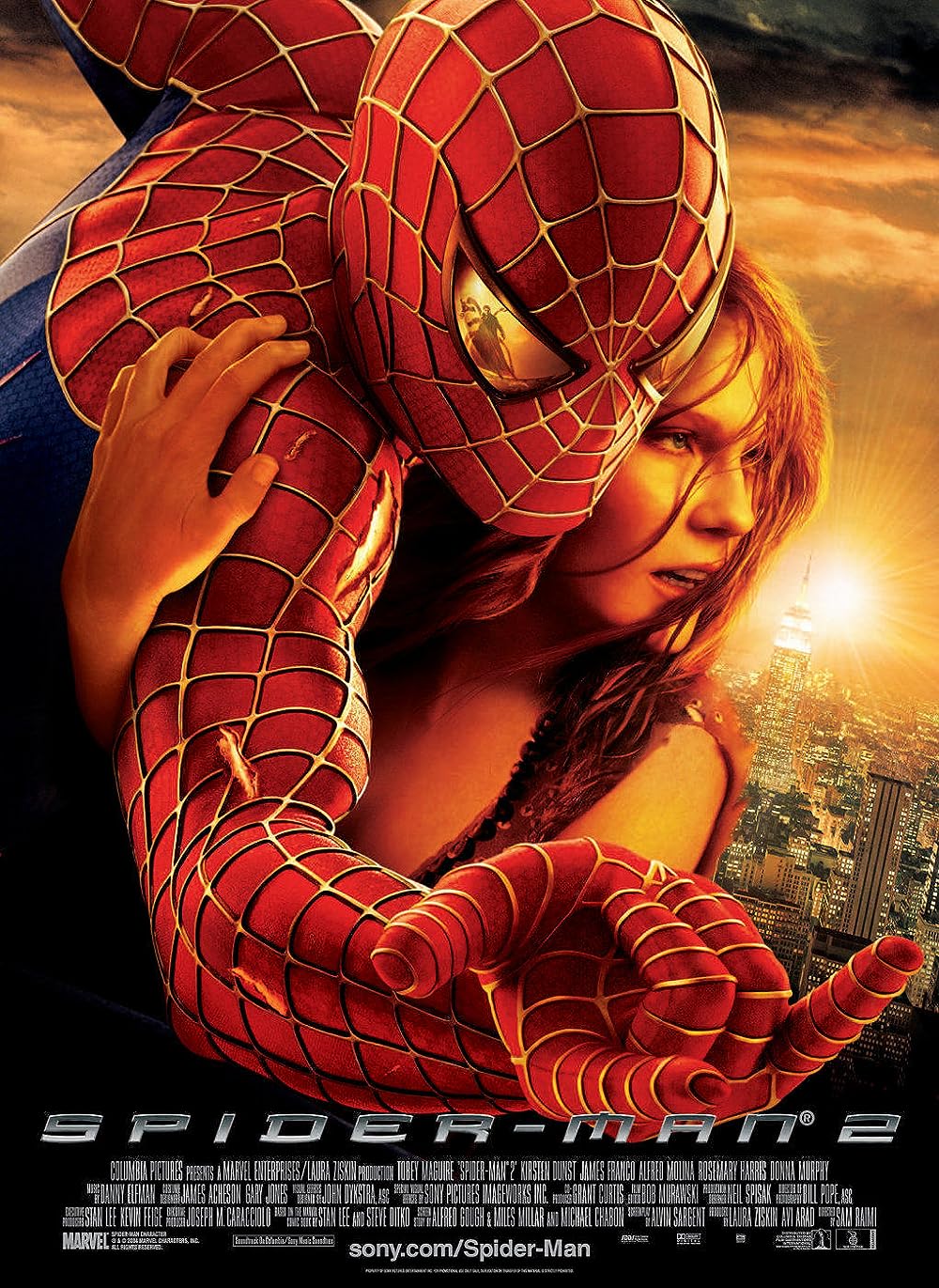 "With great power comes great responsibility." These are the words spoken to Peter Parker (Tobey Maguire) by his Uncle Ben (Cliff Robertson) in the first film of Sam Raimi's "Spider-Man" trilogy. These words speak true in Maguire's second outing as Spider-Man, as he must now figure out the perfect balance between his personal life and his duties as the wall-crawling superhero.

Parker's life is now totally different. Not only is he trying to figure out how to adjust to life out of high school, but also trying to manage the responsibilities of saving the city as his superhero alter-ego. This is complicated by the fact that his now ex-best friend, Harry Osborne (James Franco), hates him due to his father's death at the end of the first film. He is also trying to figure out how to win the heart of Mary-Jane (Kirsten Dunst), but also keep her safe from his enemies.

However, when Dr. Otto Octavius (Alfred Molina) is transformed into super villain Doc Ock after a failed science experiment, Peter must put it all on the line to bring down this menace to society. But, can Peter keep everything in check to be able to continue to be everyone's favorite web-slinger, or is he forced to hang up his suit forever?

This is perhaps the best film in Raimi's trilogy. Not only does it provide great visual effects and choreographed fight sequences, but it adds different emotional layers to our main protagonist. Like mentioned earlier, Peter goes through a lot of changes throughout the runtime for this film. He has to adjust to his newfound life, but also not leave the old life of Peter Parker behind. This proves difficult for him as he forsakes his friends and family to try and save the city all by himself. It also causes him to rethink all of the decisions he has made up to this point in time, especially when he loses his powers for a brief segment in the film.

Doc Ock is a fascinating, yet horrifying villain. He is a man who has four robotic arms attached to his back, which start to poison his state of mind, forcing him to turn into this horrible villain who will stop at nothing to get what he wants. If you just want to see how horrifying he is, look at the scene where he is being operated on by doctors following the failed science experiment. It is perhaps one of the most frightening scenes in a superhero film. Raimi started his film career directing low-budget horror films, and you can definitely see the influence his earlier films had on this scene.

The fight sequences and cinematography are a lot of fun to watch, and this movie contains one of the best fight sequences in Raimi's trilogy. The scene in question is when our hero fight the villain on top of a fast-moving train. The whole entire scene is shot beautifully, and the actors do a great job of making the fight seem so real. I especially love the scene where Peter stops the train by shooting webs on the passing skyscrapers, causing him to slow it down with force. I think it is a very badass sequence, and shows what our young hero is capable of.

I also think Raimi definitely does a great job with setting up the subplots for this film. Even though Harry never really gets any closure in this film, it is a great set-up for his story arch in the next film that comes out. The same can be said for Mary-Jane, as Peter is trying to win her love and affection, yet fails miserably as he just wants to protect her. This storyline is more resolved towards the end of the movie, but it also sets up yet another subplot for the next film. I love this about Raimi's trilogy, as he is thinking more in advance in terms of story quality, rather than what is happening right now during the film we are watching.

Overall, I think this film is just a tad better than the one before it. I think it was necessary to spend so much time on Peter's emotional level as it provides more depth to his character. It gives more meaning to the things he does throughout the film, making this not only a superhero film, but a character study about a young man who is trying to adapt through change in this weird stage in his life.