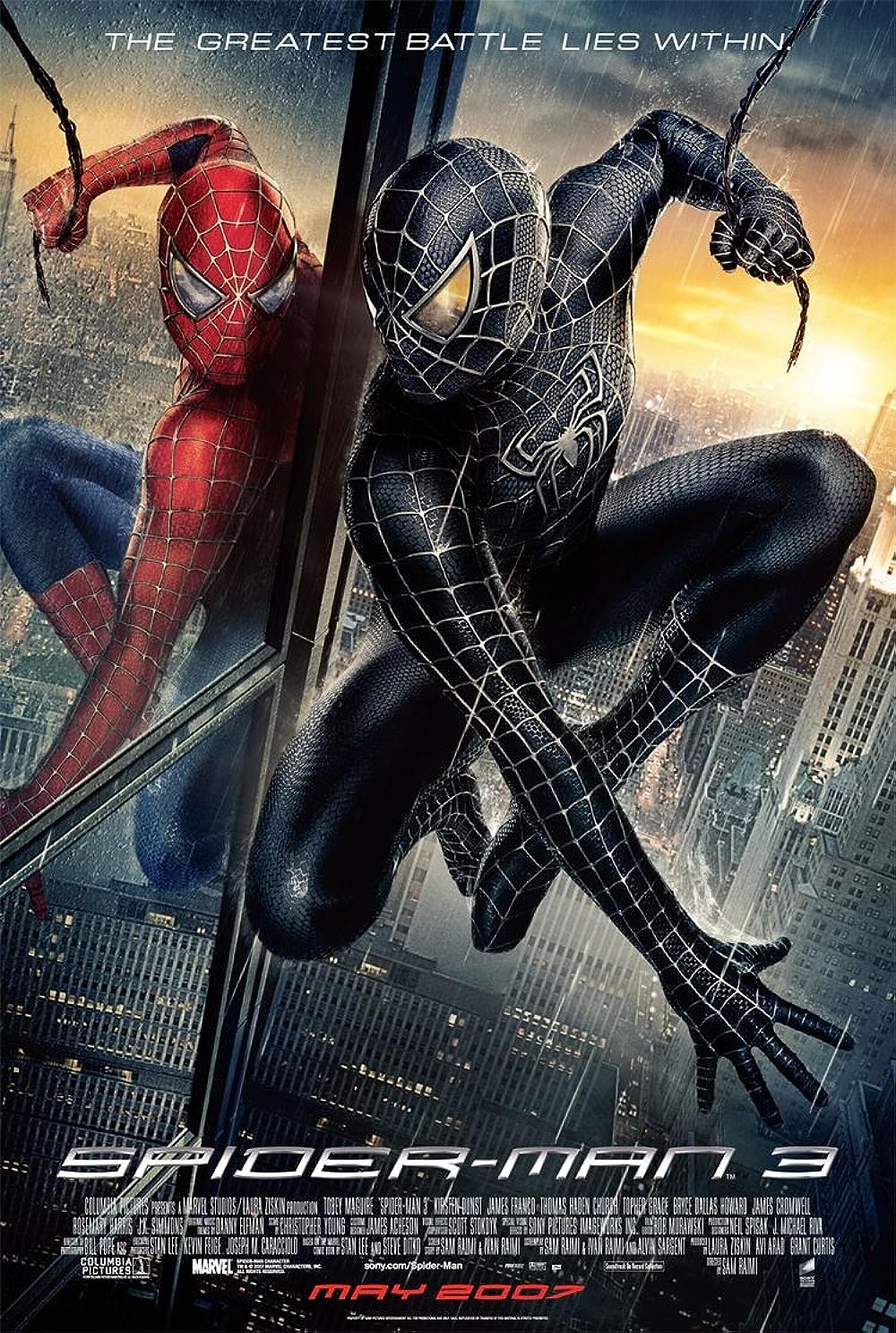 Sam Raimi has made one of the most well known superhero trilogies of all time, and he ends his trilogy with Spider-Man going up against some of his most popular foes from the comic books. However, what should have been an awesome film that concludes Peter Parker's story, we receive a mediocre film that feels way too overpacked and a storyline that makes us despise our titular character.

Peter (Tobey Maguire) has everything he could have ever wanted. He got the girl (Kirsten Dunst), a massive fan following due to his superhero alter-ego, near-perfect grades in college, etc. What more could a man want? Yet, because of all of this success, Peter gets a very big head, acting like he is better than everyone, as well as pushing away the people closest to him.

While facing this personal dilemma, he is now being threatened by three major villains: Eddie Brock (Topher Grace), who becomes the terrifying Venom after being infected by it at a church; Sandman (Thomas Haden Church), who is an escaped convict that has ties to the murder of Peter's Uncle Ben; and Green Goblin (James Franco), who was Peter's former best friend that is now on the path to avenge his father. Will Peter be able to take down all of the villains, or will his personal and superhero problems get the best of him?

As a film, I can appreciate the direction that Raimi went in. He tried to put all of these amazing villains in one film, and I just don't think it works. The whole movie just feels very packed, and there's too many storylines for the film to cover. In my review for "Spider-Man 2", I noted how I liked the fact that Raimi put in all of these side plots to keep the story going. Yet, for this installment, I think he just went a little too far with all of the numerous characters and subplots.

At the same time, Peter is such a despicable character throughout this movie. He acts very cocky and rude to everyone, and it gets even worse when he is infected by the Venom symbiote. However, what I can say is that this film does give off a very cheesy vibe, which Raimi was using in some of his low-budget horror films before the release of this trilogy. I would say that this film does give off a more humorous vibe if you can be in the right mindset for that. If you take this film too seriously, you're going to absolutely despise it.

The action and graphics are very well done however. Like the other two films, Raimi does a great job of using the camera and CGI to tell the story through action sequences. Even though the film does seem too packed with all of the character, I would say that the fighting sequences between all of these new characters was very well done and a lot of fun to watch.

It is a tad disappointing that this film did not reach its full potential. This could have been a great ending to this almost perfect trilogy, but I can appreciate the chance and risk that Raimi and Maguire took in making this film this way. Even though this movie does have a lot of flaws that could have been easily fixed, I would say its still a very enjoyable and fun film to watch.