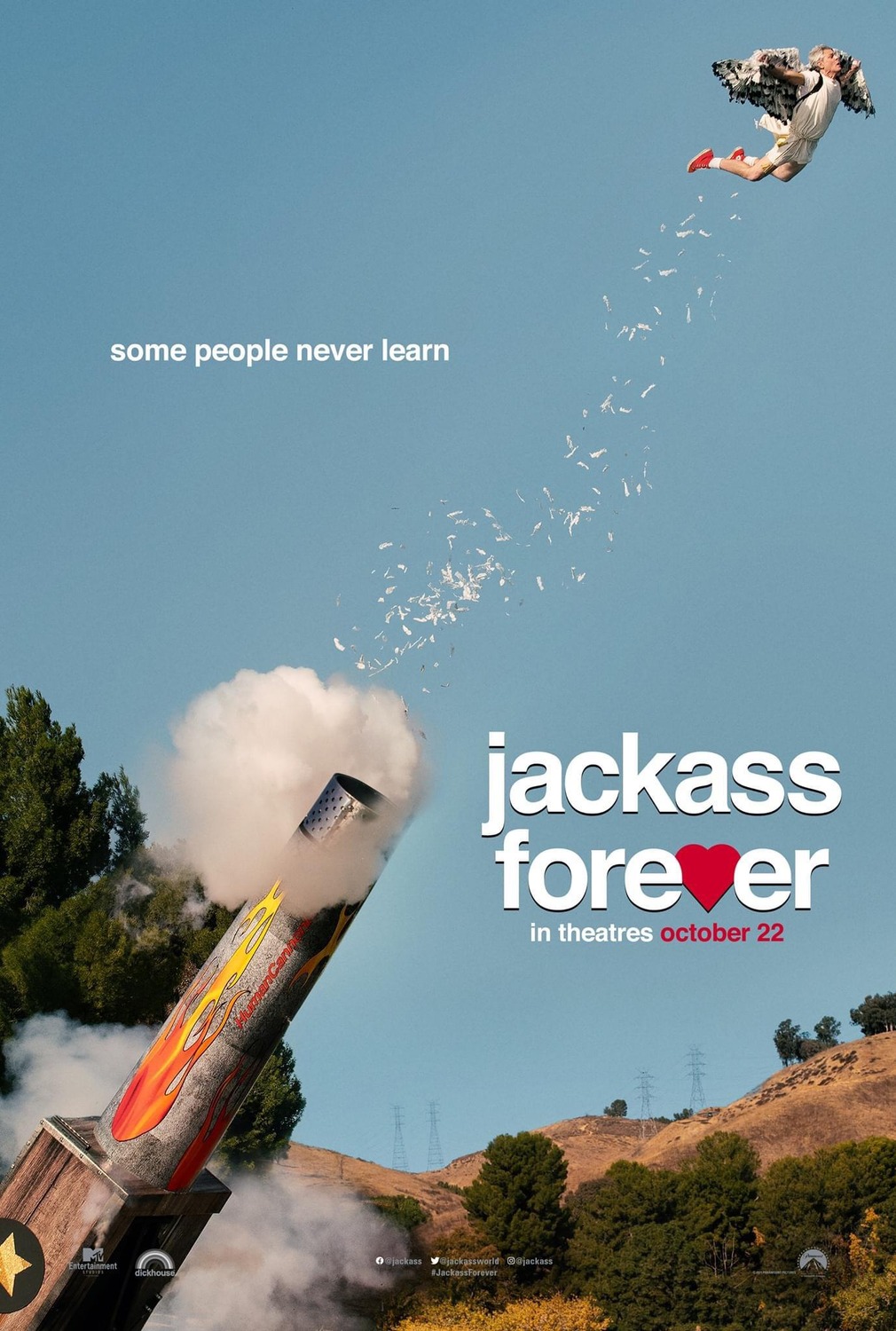 "Hello, I'm Johnny Knoxville and welcome to Jackass!" is the infamous opening line of every Jackass film, and the viewer knows that after that quick welcome from the leader of the group, they are in for a wild, crazy, sometimes disgusting, explicit, and downright idiotic adventure. The fourth, and final entry into their franchise, "Jackass Forever", is no exception - and it is a whole lot of fun, just like the previous installments.

From grand-scale stunts to simply kicking their fellow members in the privates, the Jackass crew will stop at nothing to get a laugh out of its audience. The group consists of the series regulars: Knoxville, Steve-O, Chris Pontius, Preston Lacy, Jason "Wee Man" Acuna, Dave England, Ehren McGhehey (who received a vast amount of screen time in this new addition to the franchise). They also add newcomers Eric Manaka, Jasper Dolphin, Sean "Poopsies" McInerney, Rachel Wolfson, and Zach "Zackass" Holmes.

You're probably wondering why a film like this could warrant a five star rating? This film, on a whole, is a grand spectacle. Some movies may have a grand idea that they are trying to execute, but fail. Yet this movie doesn't really live up to any expectations. We, as the viewer, already know what this film is going into it. We know what is going to be involved. Therefore, the fact that this movie is able to make the viewer laugh and enjoy themselves so much that they are on the verge of wetting themselves, then this movie does the job it set out to do.

Knoxville, Steve-O, and the other old-timers are surprisingly doing many of the stunts in this film. From trying to light a fart underwater to having a bee colony sting every part of Steve-O's penis, it seems like they are going all out for their last hurrah as the Jackass crew. If more of these films come out involving the newcomers, I doubt very seriously Knoxville or the others would be far from the action, egging the new-timers on.

While it may be the least disgusting film out of the series, it is definitely the most graphic. Penises and anuses are on display throughout most of this movie, as well as stunts and acts involving aforementioned body parts and graphic shots of blood and injuries. While some may complain, saying that this movie is basically throwing in graphic nudity for the sake of it, I disagree as I think this ups the stakes and factors of the stunts and performances. Perhaps the stunt that got the biggest reaction out of the audience was when one of the men pogo-sticked on McGhehey's testicles, causing one to break open and bleed. This is perhaps one of the only films to show something as graphic as that in a mainstream film, and I applaud the filmmakers and performers for taking the risk in doing that.

In addition to the main team, we also see a slew of guest stars, including Machine Gun Kelly, Tyler, the Creator, and Eric André to name a few. They add a humorous factor to these stunts by just being there, as it is extremely funny and entertaining watching these big time celebrities get shaken around on the set of this film.

You also have to applaud the dedication these men have to do this job. Turn your attention to one of the final stunts in the film, where Knoxville is knocked into midair by a giant bull. He does at least two flips while in the air before landing violently on his neck. From reading some of the articles concerning this movie, it is reported he broke many bones and suffered a major concussion, causing him to lose motor functions for a brief period of time. Even though he had just suffered major trauma, he was more worried about if they got the shot or not. You can say what you want about the members of this film, but you definitely have to give them credit for putting it all on the line for their fans.

The fact that this movie is the swan-song for many of our favorite stunt performers adds a bittersweet note to the finale of this film. While we as the viewer have considerably enjoyed everything this film has to offer, it makes us appreciate this film and its members for giving their fans quality entertainment over the years. What other group like this can we say that about?