"Pirates of the Caribbean: At World's End" Film Review 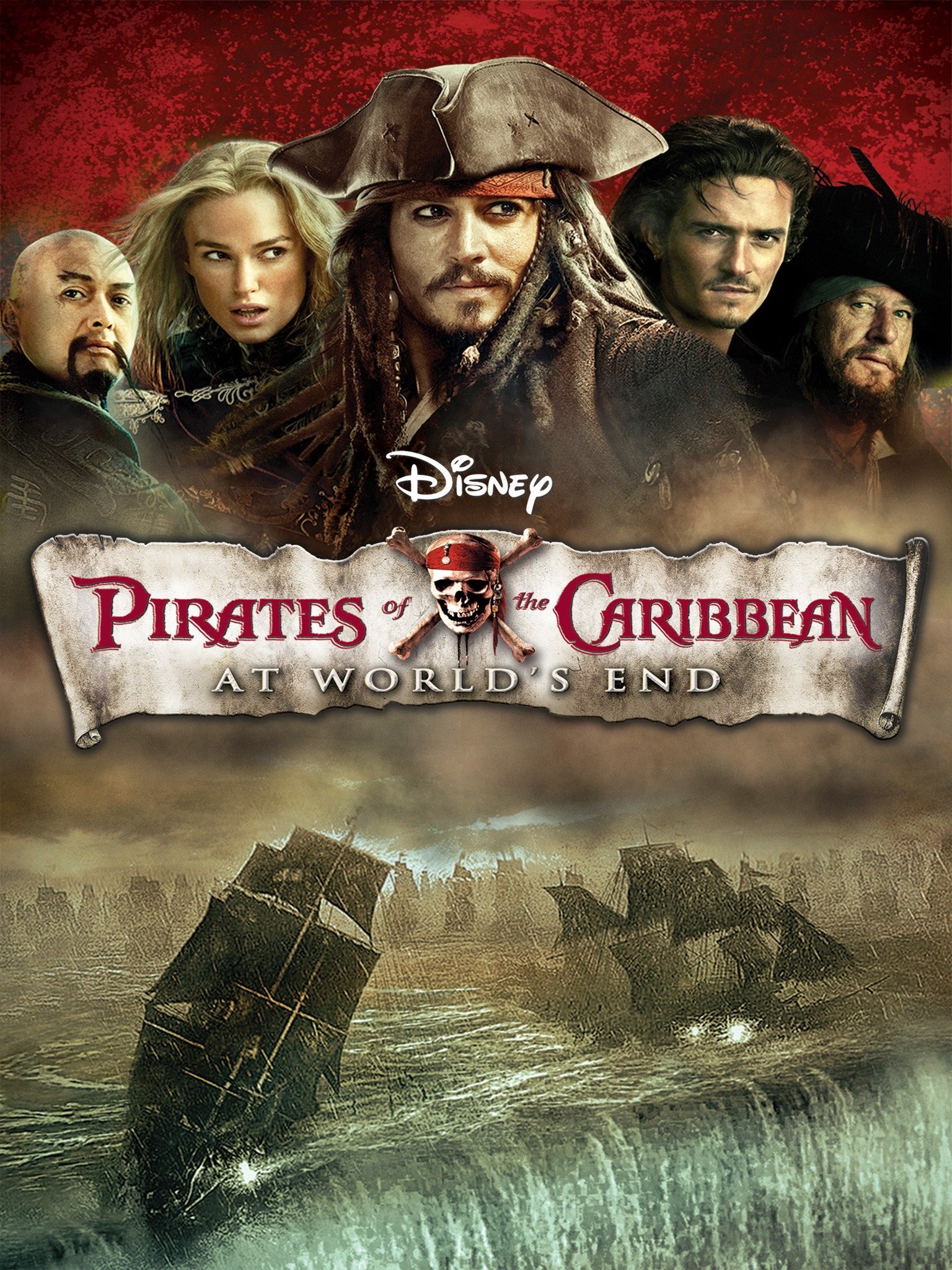 "Pirates of the Caribbean: At World's End" Film Review

Jack Sparrow (Johnny Depp) is now trapped in Davy Jones' Locker. After the shocking ending of "Pirates of the Caribbean: Dead Man's Chest", all hope seems lost as everyone's favorite captain, as well as the famous Black Pearl, were taken down by the Kraken, Davy Jones' (Bill Nighy) monstrous pet. Desperate to recover their friend and leader from the depths of Davy Jones' Locker, the rest of the crew (Orlando Bloom, Keira Knightley, Kevin McNally, and more) are forced to team up with the revived Captain Barbosa (Geoffrey Rush) and the voodoo master, Tia Dalma (Naomie Harris) to lead them to death and back. Along the way, they must figure out how to destroy Davy Jones for good, who is now being controlled by the East India Trading Company's evil leader, Cutler Beckett (Tom Hollander) in this action-packed and satisfying conclusion to this trilogy.

This movie is perhaps the most action-packed of the entire trilogy. It seems like our characters are getting themselves into different situations everywhere they turn. From the beginning of the film in Singapore to obtain the map to Worlds' End to the decisive final battle between the Flying Dutchman, the movie never slows down in its fight sequences. They are always a lot of fun to watch, and Ted Elliott and Terry Rossio write these scenes to include the humor and wit of our favorite characters.

One of those characters being Captain Jack Sparrow. He is perhaps at his most crazy and absurd in this film, but Depp is incredible at being crazy and absurd. Literally every single scene he is in is a lot of fun and the viewer wishes he could be in every scene of the film. It's refreshing to see a more crazed version of this character, like when he is trapped in the Locker, as well as seeing classic Jack on display. There are two prime examples of Depp's genius as this character. The first comes towards the middle of the film, where Jack is trying to outdo Barbosa as captain. He decides to fashion a spyglass that is at least a couple feet long to make it look bigger than Barbosa's. This tongue in cheek humor is a lot of fun to watch, and definitely warrants a laugh out of the viewer every time.

The second comes towards the final battle of the film, when he is engaged in a sword fight with the evil captain of the Flying Dutchman. They move towards the helm, where there is a barricade blocking the two foes from fighting. However, Davy Jones swiftly moves through the barricade, getting right next to Jack. Jones then growls and tries to scare Jack, causing him to let out a terrified scream. It's very hilarious, and so refreshing to watch as there is no other pirate like Jack Sparrow. What other pirate can you imagine screaming like that when he is fighting his foe? This is what makes Depp's performance so wonderful and so unique.

The other characters are great as well, and you can definitely see the growth of our characters throughout this trilogy, especially that of Elizabeth Swann (Keira Knightley). She goes from hating pirates and loathing the life they live to becoming a pirate lord and fighting alongside the crew of the Black Pearl. They are able to craft a story arc for her that I think perfectly fits in the lore of the Pirates films.

The cinematography and action sequences are especially wonderful to look at, especially the final battle. There is a massive maelstrom between the two ships as all of the pirates fight, which was perfectly created and shot. It is beautiful watching this giant battle take place, and it is still able to hold up to today's standards of CGI and cinematography. In addition to this, the rest of the cinematography in all of the different islands and towns they visit are great, and each new location has its own different mood and vibe to it. It really transports the viewer into the film, rather than just watching it.

However, there is a huge problem concerning this film - it is just too long and complicated. The movie has a runtime of nearly three hours, and a lot of that is spent trying to set up different events and diving into the lore of the mythology of the sea. Sparrow doesn't even appear in the movie until an hour in. This film was definitely way too long, and they could have edited the film a lot better to make it flow more smoothly. It reminds me of the Matrix films, as those also try to dive too far into the mythology, but just leaves the viewer feeling confused and annoyed that they aren't understanding everything that is happening throughout the film.

Overall though, I am genuinely happy with how this trilogy ended. I think it was able to wrap up most of the plot lines perfectly, and have a happy ending for all of the major protagonists of this film. This film definitely sets up another movie, and Disney mades two more at the time of writing this review. But, to just hold these three films as a trilogy of itself, then I think the filmmakers do an excellent job of telling the stories of these marvelous characters on the Seven Seas.