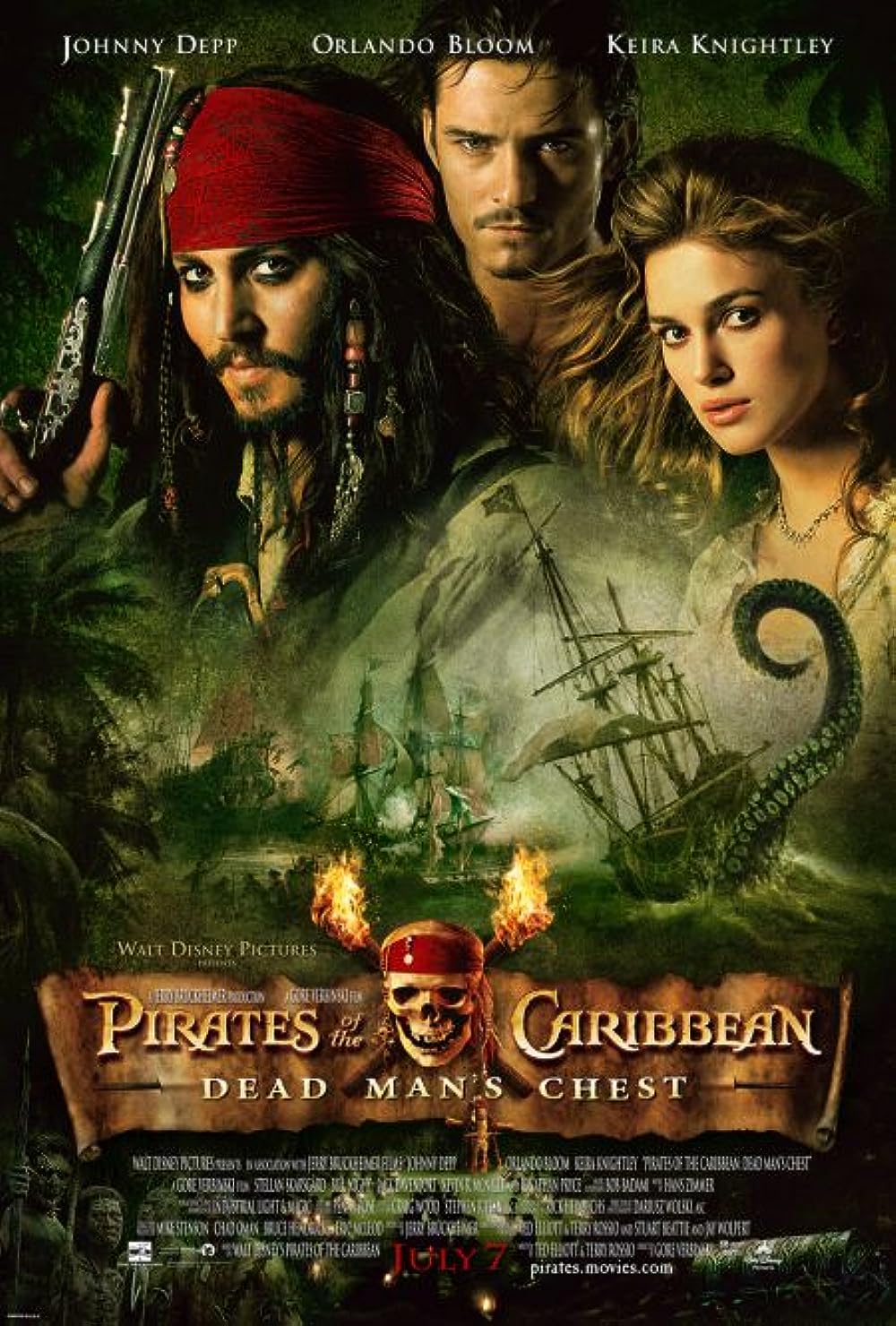 What is the thing that draws viewers in to seeing the "Pirates of the Caribbean" films? Is it Johnny Depp's fantastic performance as Captain Jack Sparrow? Is it the excitement of our swashbuckling characters and the various sword fights and action sequences? Or perhaps it's the nostalgia people feel towards this movie due to the popular ride at the Disney theme parks? Whatever the reason, this second film of the massive Disney franchise, "Pirates of the Caribbean: Dead Man's Chest", delivers on every front, and is an exciting and fun adventure from beginning to end.

This film picks up where the first one left off, with Jack and his crew on the Black Pearl, eager to find a new adventure to set sail on. However, when he is given the Black Spot by Davy Jones (Bill Nighy), it signals that he only has a certain amount of time left before he must submit his soul to the Flying Dutchman for one hundred years.

At the same time, Will Turner (Orlando Bloom) and his fiancee, Elizabeth (Kiera Knightley) have been captured and imprisoned by Lord Cutler Beckett (Tom Hollander) of the East India Trading Co. Threatening the two love birds with death for helping Jack in the first movie, he sends Will on an adventure to obtain Jack's compass and bring it back to him. What Will doesn't expect is to be caught up in a whirlwind of a journey to find the chest that contains Jones' beating heart. While there are other pirates hot on the trail for the beating heart, they must team up once again to defeat the bad guys and take back what is theirs.

This film is definitely on a much larger scale than the first one. Due to the success of the first movie, it opened the door for the filmmakers to expand the world that our characters live in, granting them access to new locations and bigger battles. Because of this, this film delivers perhaps one of the best sword-fights in cinema history. To give some context, Jack and his crew have located the chest that contains the beating heart. So, Jack is planning on taking it for himself to convince Jones to let go of their debt. However, disgraced Commodore Norrington (Jack Davenport) and Will have other ideas with the heart, causing them to fight each other throughout the tiny island. It then eventually leads to a large wheel, which they fight on as it rolls through the jungle of the island. It is perfectly choreographed and shot, and has the right amount of action and humor. The whole entire sequence is so much fun to watch, and could definitely be one of the best scenes in the entire franchise.

Depp's performance as Captain Jack is undoubtedly amazing in this film. I mentioned it in the review for the first film, and I'll mention it here again - this is Depp's best performance of all time. He goes all out, and is able to fully embody the character of this swashbuckling pirate. There is never a dull scene with Jack throughout the movie, and he is able to flawlessly entertain the audience with every shenanigan he gets himself into.

The other supporting actors are great as well. Bloom and Knightley give great performances their second time around as their characters, and Nighy is able to take the viewer's breath away as the terrifying Davy Jones. Everything about the villain is eerie and terrifying, and he is able to strike fear into the hearts of the viewers.

The music is once again amazing. Hans Zimmer takes over the role as the composer, and he delivers a beautiful score that perfectly captures the tone of the entire film. He definitely takes inspiration from the first film, and he doesn't fail to deliver. The music is important to mention due to the fact that this film series contains some of the best soundtracks of all time. Every score is very well-crafted to fit every scene, and it doesn't seem like anything was rushed or uncared for. This is the work of a master who takes genuine care of every piece of work he creates.

Overall, this second movie definitely shows that this franchise has no plans of slowing down, and is able to fire on all cylinders. This movie is tons of fun, and it has something for every type of viewer. This is a great film to watch with family and friends of all ages, and it is nearly impossible to get bored or burnt out by the antics of our characters. Disney really has a masterpiece on their hands, and hopefully they can deliver like this on every film in this franchise.