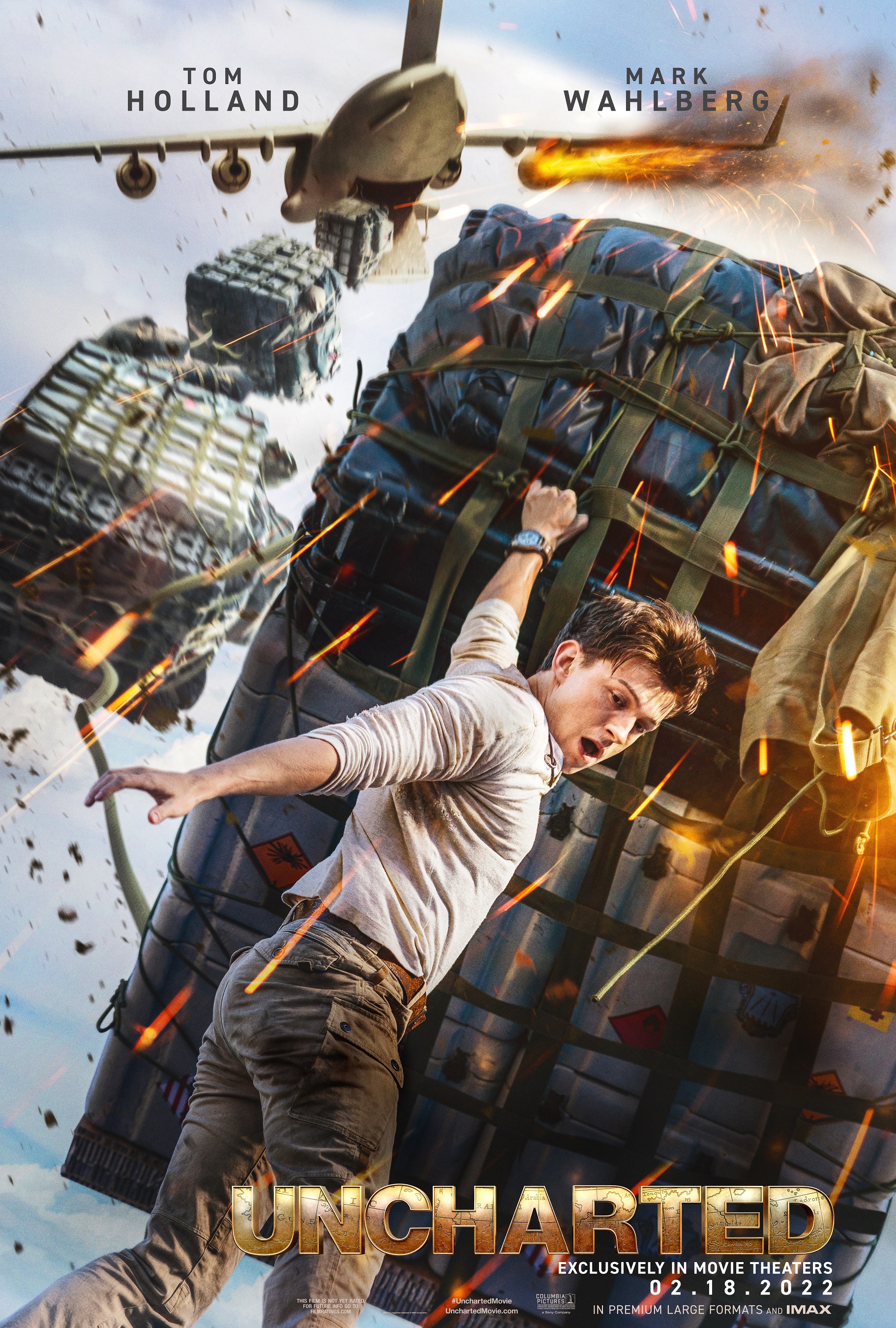 Tom Holland is perhaps one of the most famous actors in the world right now, so it didn't come as much of a surprise that he was cast as Nathan Drake in the film adaption of the popular video games series, "Uncharted". The series, which follows Drake around the world as he searches for hidden and lost treasure, has been played by millions of people around the world, prompting Sony to pursue a cinematic path for this character. They were also lucky enough to cast acting heavyweights like Mark Wahlberg and Antonio Banderas alongside Holland in this fun, mindless action-adventure film.

Drake has been on the search for Ferdinand Magellan's hidden treasure all his life. After learning the trade of treasure hunting from his brother (who runs away after getting caught trying to steal the map to Magellan's treasure)  at a young age, he starts to hone his craft and journeys after bigger and bigger treasures. When he is approached by Victor "Sully" Sullivan (Wahlberg), who claims he knows his brother  and is on the hunt for the treasure, Drake jumps at the chance of finding both his brother and the coveted treasure.

However, when the duo is being chased by Santiago Moncada (Banderas) and Braddock (Tati Gabrielle), who also want the treasure, the two unlikely heroes must force themselves to trust one another and try to find the treasure as a pair. Things are further complicated by the beautiful Chloe Frazer (Sophia Ali), which Drake falls head over heels for. However, if you let your guard down in this profession, you can get stabbed in the back by the people you least expect.

This film is, without a doubt, extremely fun and exciting. Our characters are thrust into crazy situations where they have to fight to survive. One of the biggest action sequences in the film comes towards the middle, where Drake is forced to fight his way back onto an airplane after being tossed out of it. It is beautifully shot, and Holland is able to bring in his fun sense of humor into action sequences like this.

Speaking of humor, this film is full of it. The characters crack jokes whenever they get the chance, which gives it a real adventure vibe to it. It calls back on the jokes that are made in films such as "Indiana Jones", which makes our characters so much more fun and lovable. There are definitely a couple of instances where they used humor that wasn't appropriate towards the scene, but still hit the mark for the audience members in the theater.

My biggest peeve with this movie is the lack of characterization, especially for the villains of this film. There is a major plot twist towards the middle of the film, which practically shifts focus from one villain to another. However, they never really gave this character much of a backstory or a real purpose for why they are there. It seems like they just kind of threw it together at the last minute, and tried to add a plot twist that would shock the fans. The filmmakers could have definitely pursued the stories of the villains more, instead of having filler scenes of our characters drinking and cracking jokes with one another.

Overall, this movie is definitely a film to just sit back, relax, and enjoy watching. It doesn't make you think too hard, and you can just turn your brain off while the movie plays on the screen. It is definitely not thought-provoking cinema, nor should it be hailed as one of the best adventure films of all time. But, for what it was, it was still a very enjoyable and fun film to watch.