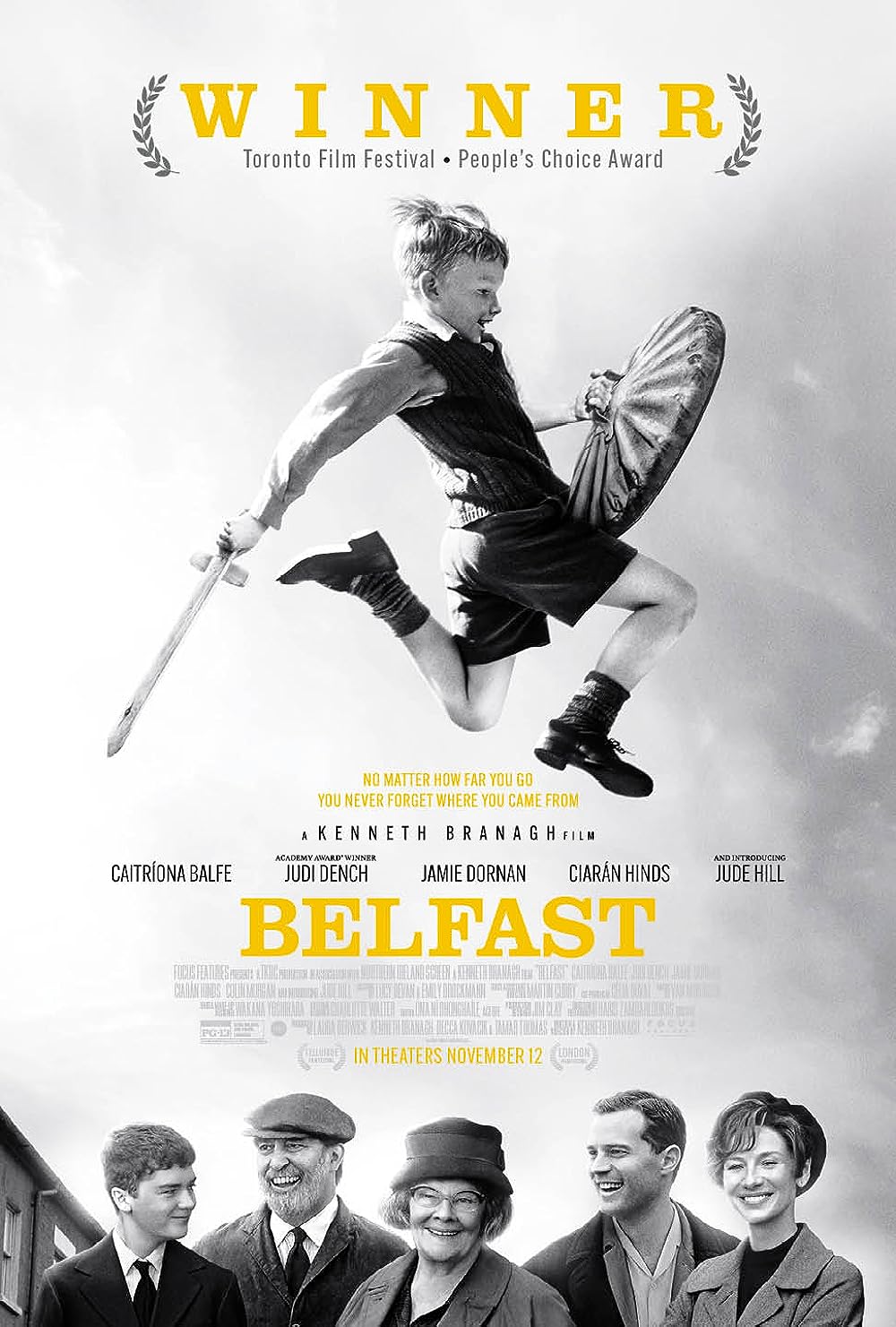 Kenneth Branagh had already been established as a world-class actor and director when he released "Belfast", his most personal film to date. Set in the backdrop of late 1960s Northern Ireland, especially during an incredibly violent time as it documents the ongoing war with the Catholics and Protestants, this semi-autobiographical film unfolds through the eyes of a nine-year-old boy named Buddy (Jude Hill), which is Branagh's fictionalized version of himself. Shot in black & white, as well as sporadic shots of color, this touching film is able to not only move the viewer, but give a detailed and personal account of what Branagh went through as a child.

To cast the family that surrounds Buddy throughout the film, Branagh was able to get a very impressive ensemble that consists of Jamie Dornan, Cantriona Balfe, Ciarán Hinds, and Dame Judi Dench (who is almost unrecognizable in her role). Each of their roles have such a fun and unique quality about it, and each is a joy to watch in many of the scenes throughout the movie. A standout scene to me was when Dornan sang a cover of "Everlasting Love", as the entire scene was fun and a relief following a very traumatic moment in the film. These actors are able to perfectly compliment young Hill, who definitely gives the standout performance in this movie.

Hill has so much energy and oozes charisma, giving the film a very energetic and fun tone. It is impossible to not like him or enjoy his presence in the film, and he gives such a fantastic performance as this young boy growing up in this terrifying climate. At the same time. his interactions with the other characters, especially those with his grandparents and his cousin, Moira (Lara McDonnell). You can see the care and love Branagh put into this film by looking at Buddy, who is supposed to represent him. This is a very personal subject for the writer and director, and I think he does a fabulous job of portraying the characters in that way.

One major aspect that stuck out to me the most was the care Branagh took in crafting a subplot to represent Buddy's growing love for film. Mirroring scenes from the fantastic Giuseppe Tornatore film "Cinema Paradiso", many moments of this film contain Buddy and his family at the movies, showing every member happy for once when they're at the theater. I love how he included this into his film as it shows how films can change someone's life. Buddy grew up with his parents fighting, the on-going war out on the streets, the fear of failing from school, and so much more, yet he is able to find solace at the theater, which would help shape him for the future. This is further supported by the films being shown part of the only colorized shots in the film. I very much enjoyed this great styling choice, as it shows that film is a portal that Buddy can travel to to escape his life for just a little while.

When watching this film, it makes the viewer feel as if they are looking back on old photographs or remembering fond memories. This is due to the wonderful cinematography by Haris Zambarloukos, which is able to capture Branagh's childhood growing up and deliver it on the screen. From lingering shots of the town to the glorious color shots inside the theater, it feels as if Zambarloukos is able to go back in time to see everything that takes place, documenting everything that Branagh wants him to. I just think he did an excellent job, and it was able to be shown throughout the entire film.

I would go as far as to compare this film to Alfonso Cuarón's amazing film, "Roma". Like the 2018 film, this movie is able to capture the times that it is documenting, providing a beautiful outlook on the lives of these everyday people through this time era and setting. This film definitely opens the door to the viewer, letting them go in and explore Branagh's childhood and memories he had growing up. To make a film like this must be incredibly challenging as he wants to make sure everything is exactly how he remembered it, and I think he did a fantastic and beautiful job.