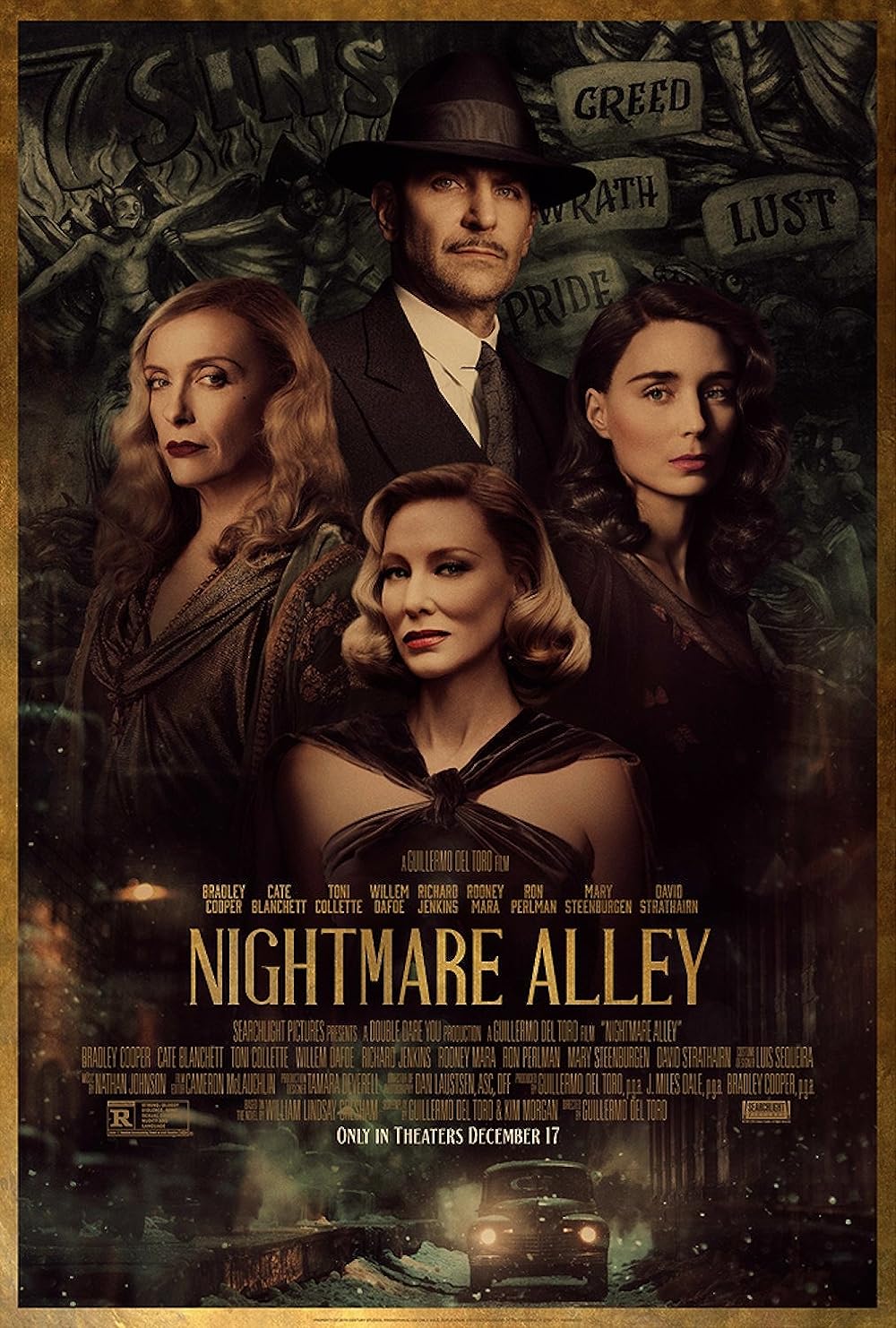 Guillermo Del Toro is one of the masters of modern horror. From films like "Pan's Labyrinth" to the Oscar-winning "The Shape of Water", he is able to terrify audiences, while also romanticizing the viewer with beautiful cinematography and stories of love and loss. His newest film, "Nightmare Alley", is no exception. Following a young man who joins a sideshow carnival to escape his troubled past, the movie sets up a beautifully creepy atmosphere that draws the viewer in and holds their attention for the entire runtime.

The man in question is Stanton Carlisle (Bradley Cooper), who is seen dragging a dead body under his house in the first scene of the movie. This scene is what sets up his characterization throughout the entire movie. Not only does it stick with him as the movie progresses, but hints at the fact that Stanton is hiding secrets from everyone, especially in his career as he becomes bigger and bigger as a mentalist.

The mentalist act does wonders for him, as he leaves the carnival with his new girlfriend, Molly (Rooney Mara), and sets up a life for both of them. However, when he is challenged, and eventually hired, by a therapist named Lilith Ritter (Cate Blanchett), he must face his inner demons and put his life at risk to become the best and richest mentalist that has ever lived.

This movie is split up into two halves; one half takes place at the carnival and the second takes place when Stan is a very successful mentalist with Molly. When analyzing the flow of the movie, I think this was a great change in pace and tone to jump two years forward and see where Stan is now. Yet, I think Del Toro wastes the potential of the carnival. He tries to set up the carnival to be this very creepy place and is hiding many secrets; yet, we don't really get that. Sure, there are horrible things that happen at the carnival and it does give off a creepy atmosphere, but I think it does waste a lot of the potential it has.

At the same time, I don't really think the climax is as good for what they were setting up. The second half builds up so much suspense and is trying to prepare the audience for this huge climax, yet the climax is so small in scale and seems wasted. It's hard to not feel left down by this as most of the second half is build-up to this grand finale, which ultimately never comes.

However, when saying all that, I think the performances by everyone involved are spot-on. Cooper, Mara, and Blanchett give fantastic performances, as well as having great on-screen chemistry with one another. Then, when analyzing the carnival characters, Willem Dafoe, Toni Collette, Ron Pearlman, and so many others give fantastic performances as the carnies, setting up the film for Cooper to take the reins in the second half.

One thing I really enjoyed about this movie is the last scene. Not to spoil it for the reader, but there is a major plot twist that will both disturb and depress the viewer. It is so out of the blue, yet is such a great ending and makes perfect sense when thinking back on what had happened previously in the film. It is able to bring the movie full circle, making the viewer feel both satisfied and horrified by how one of our main characters ends up.

Overall, I do think this is another great horror thriller from Del Toro, and contains great performances and spot-on direction by the Academy Award winner. While I definitely don't think this is close to being his best film, I do think he did his job by entertaining and frightening audiences of all ages.