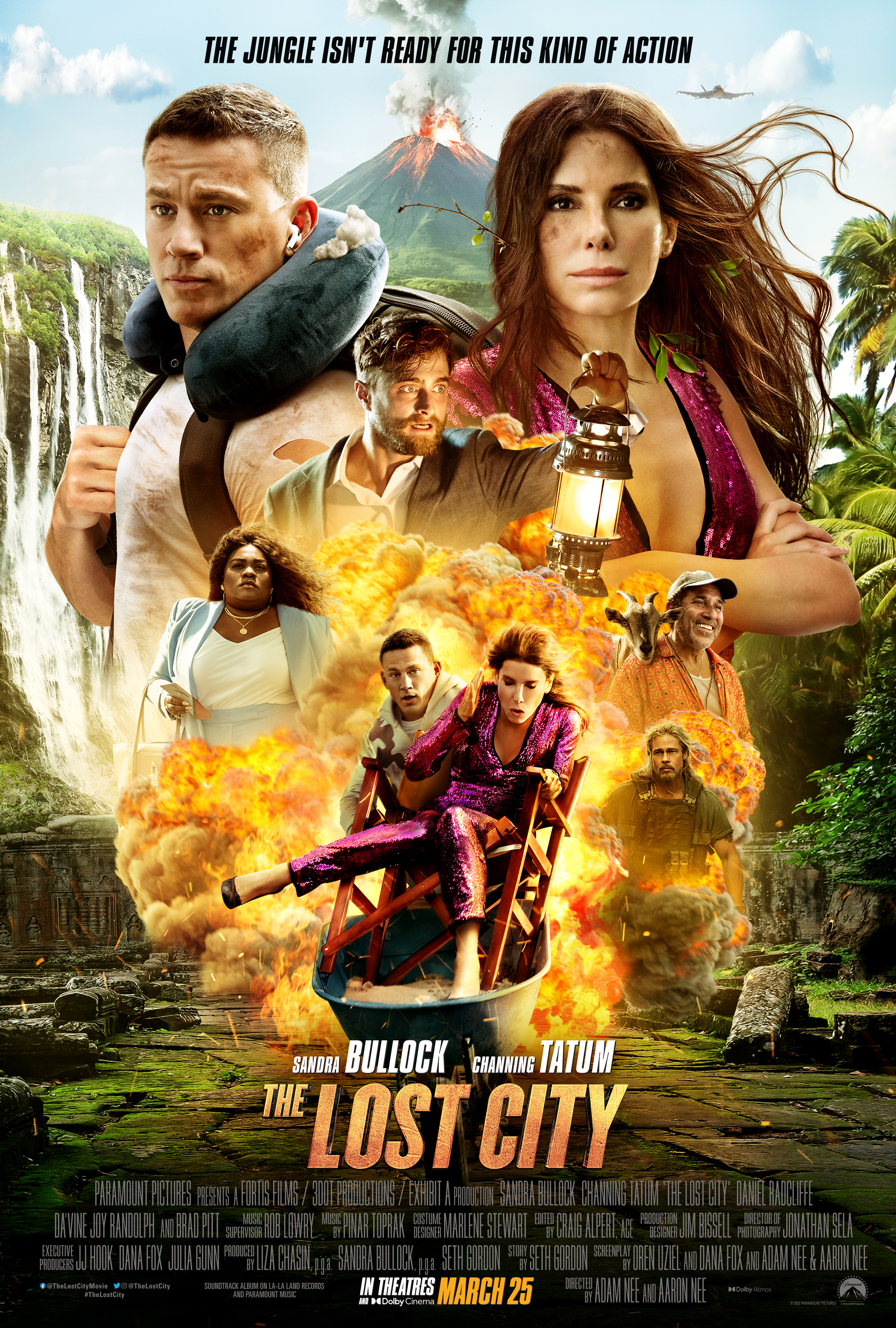 "The Lost City" follows the same plot structure as many other adventure comedies. There are jokes, explosions, massive fights in the forest, and other general plot points from other films that fall in this genre. However, due to the fun and energetic performances from the entire cast, especially Sandra Bullock and Channing Tatum, this film is able to charm and entertain the audience perfectly in this fun adventure film from Aaron and Adam Nee.

The film follows Loretta Sage (Bullock), who is a very popular romance writer who sets her novels in ancient ruins and different islands. When she is kidnapped by billionaire Abigail Fairfax (Daniel Radcliffe), who is hoping that Sage can decipher the ancient writing to find the lost tomb full of treasure. After figuring out where she has been taken to, the cover model for her books, Alan (Tatum), travels across the seas with his trainer, conveniently named Jack Trainer (played brilliantly by Brad Pitt) to rescue the kidnapped author and put a stop to Fairfax's plans.

There is something about Bullock that makes her a fantastic choice for films like these. She is fun, smart, witty, and serves as a badass main character or a great sidekick to the hero, shown in films like "Speed" with Keanu Reeves. In this movie, she rescues Tatum more than he saves her, which is discussed towards the middle of the movie about feminine power in this day and age.

At the same time, Tatum, who is a very intimidating and buff male, does a fabulous job at playing a character that lacks common sense and the necessary abilities to become a great rescuer. His character can't fight, has a problem with water and blood, and can faint looking at insects like leeches, which makes him a great candidate for a movie that places him in the jungle with no way out. It's a refreshing change to see the heroine take over the operation, guiding the strong man throughout the jungle to rescue them.

The plot does move at a nice pace, combining in jokes and witty dialogue throughout. Tatum and Bullock have excellent on-screen chemistry, and they are able to one-up each other on many occasions. At the same time, the other characters in this film are hilarious as well, especially Pitt's small role in this film. He plays a strong, rugged, handsome trainer that knows how to fight and is good at rescuing damsels in distress. Throughout many of the fight scenes that involve him, he cracks jokes at Tatum's expense, trying to encourage the model while also making fun of him every time he knocks out a bad guy. It is hilarious, and I honestly wish we had more screen-time for Pitt's character.

This film isn't unique and it's easy to figure out where this film is heading, but it is still a lot of fun nonetheless. The viewer doesn't have to think too hard or worry too much about the characters and the plot, which makes it a relaxing and comforting film. The characters are so much fun to watch, and the action and fight sequences are very good as well. Overall, I really enjoyed this film from start to finish, and I think everyone involved did an excellent job. From the ending and the mid-credits scene, there is a possibility of a sequel to this fun action flick, and I hope they deliver a film just like this if that plan comes to fruition.