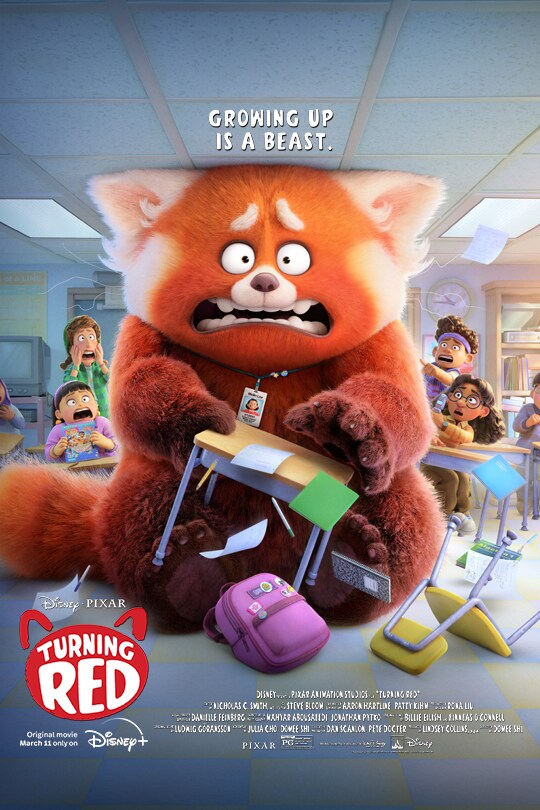 Pixar's latest film, "Turning Red", tackles the stress and tribulations of puberty, showcasing every aspect that a young pubescent girl can go through. From the discussion of pads to teenage girl's fascination with boy bands, this film is a complete tonal change of every other Pixar movie to come out to date. However, while I appreicate what writer and director Domee Shi was doing with this film, as well as breaking the barrier that has been set up for what animated films can show and talk about, I think this movie misfires on various aspects, such as plot points and characters, and could have been presented in a better way.

The movie follows 13-year-old Meilin (Rosalie Chiang) in the year 2002, who belives she is a grown up in society. She presents her reasoning for believing this in the opening scene of the film, showcasing how she is mature and succeeds at almost everything she does. She shows off her three best friends, Miriam (Ava Morse), Priya (Maitreyi Ramakrishnan), and Abby (Hyein Park), showcasing their love of boys and boy bands, especially one called "4*Town". Yet, when Meilin tries to have fun and be wild like all of the other girls her age, she has to be reined back in by her overprotective mother, Ming (Sandra Oh).

When Meilin hits puberty however, she is forced to face the curse that has plagued her family for decades - the red panda. Yes, she turns into the red panda when she hits purberty, with the big, furry beast making an appearance whenever our main protagonist gets very emotional about something. Becuase of this, she is forced to hide her inner beast, hoping that nothing happens before the next ritual which will rid her of the beast for good. However, when she discovers that the panda can be used to make money to pay for tickets to the "4*Town" concert, Meilin is at a crossroads, not knowing if she should make her family proud and go through the ritual or embrace her newfound personality and accept she is not the same girl she was before.

Like most pixar films, the animation is beautiful and draws the viewer into the events that are unfolding on screen. The animators are able to craft a perfect landscape for 2002 Toronto, as well as taking a journey back in time to the fads and wonders of the early 2000's. Evident in recent Disney films, like "Encanto", the animators have been able to perfetly create the facial expressions of these new characters, giving each character in the film their own distinct personality and uniqueness to them.

I also enjoyed the inclusitivty that was present throughout the entire film. Almost every person of color, nationality, gender, and so on are present in this film, whether in major or supporting roles. Our main protagonist is Chinese-Canadian, and her friends are also White, Korean, and Black. It was able to take the lifestlye of every type of person and incorporate that onto the screen, showing how these people and cultures influenced our main character growing up.

Yet, at the same time, I don't think Shi really knew how to create her main four characters for this movie. Each and every single one of them are annoying in a sense. They seem very cocky, rude, arrogant, and so on. It's hard to put up with these characters for an hour and a half, and it just seems tiring after a while. I understand that it demonstrated how Meilin has changed as a person throughout the film, but I think Shi spent too much time on her cocky and arrogant personality in the film.

While Shi is able to create a Pixar movie that is different from the rest of the studio's filmography, it is hard for everyone to relate to this film. Geared towards girls who grew up in this time period, as well as women who remember the struggle of going through puberty, it doesn't really appeal to the other viewers who go and see this movie. Even though I did enjoy this movie being a white male, I couldn't relate to the problems going on in this film or the girls' attitudes and reasoning for doing certain things. I'm not saying this is a bad film for this, but rather it didn't appeal to me as much as other Disney movies do.

Overall, this is a cute and fun movie that keeps the viewer engaged and entertained throughout. It defintiely does have its flaws and is far from the best Pixar movie, but for what it is and what it showcases, I think it is a pretty good coming-of-age film that can inspire young girls around the world.