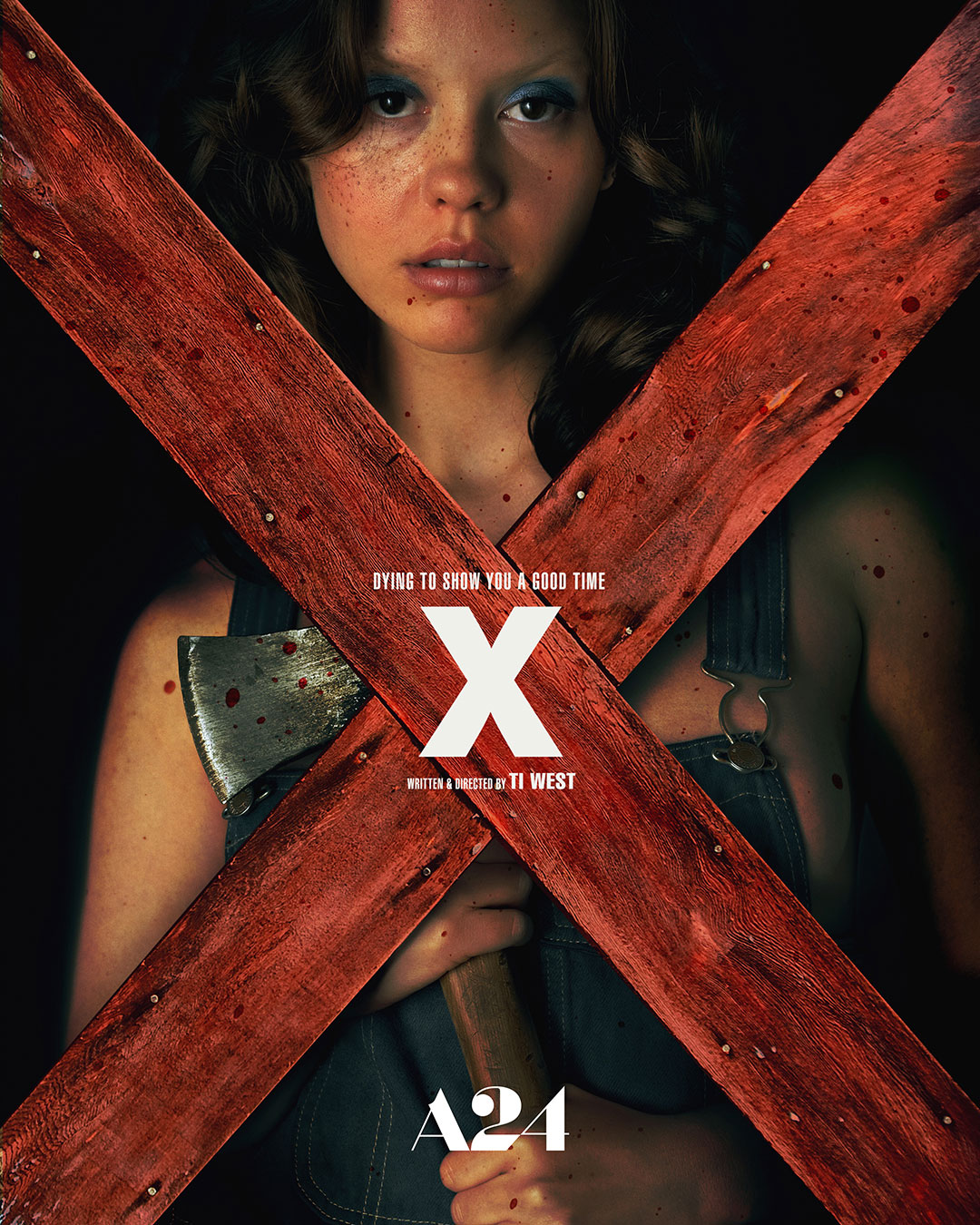 In 1974, Tobe Hooper released a little slasher film that would ultimately change the way horror would be perceived by audiences and critics alike. Titled "The Texas Chainsaw Massacre", the film followed a group of young adults in rural Texas, who are hunted and devoured by crazy chainsaw-wielding maniac, Leatherface. Now, almost fifty years later, filmmaker Ti West has released his newest horror film, simply titled "X". Even though the plot is different from Hooper's groundbreaking film, there is no doubt that it is a homage to the original slasher and exploitation films, as well as West giving his own gritty, dirty, and downright disturbing take on the classic teenage slasher trope.

The film opens with the local sheriff's office arriving on the scene of a crime, with dead bodies and guts strewn around the lawn and inside the main house. They are both shocked and appalled at the crime scene they are witnessing, yet curious as to what took place only twenty-four hours before. The film then shifts to a more grainy film atmosphere, as we meet the group of young adults that would take residence at the crime scene a day before: the producer of the film, Wayne (Martin Henderson) and his girlfriend and adult film star, Maxine (Mia Goth); wild adult film star Bobby-Lynne (Brittany Snow) and her on-again, off-again boyfriend Jackson Hole (Kid Cudi); film's director RJ (Owen Campbell) and his innocent girlfriend, Lorraine (Jenna Ortega).

To start off, I have to say this is one of the most disturbing and unique slasher films I have ever seen. I've never really seen anything like this plot-wise. The gore and blood is all the same from the other slasher films, but the way the plot is able to fluctuate from comedy to horror to borderline soft-porn, it's amazing a film like this could work. Yet it somehow does, and I enjoyed almost everything I saw. A24 trusted West to take this bonkers films, and mold it in his own vision by giving him full creative control over it. That is rare in many films today, but I'm personally glad that the studio took that risk.

From there, the acting performances by the whole ensemble are incredible. The sex scenes are more comedic than they are sexual due to the actor's performances, which is a breath of fresh air in this genre. Then, when the group is faced with the psychopathic serial killers who are hot on their trail, each actor is able to hold their own and give a fantastic performance. I also want to focus soley on Goth's performance, who plays the Final Girl (a common trope in the slasher genre; one of the most famous examples is Jamie Lee Curtis in the "Halloween" franchise) and the murderer. These two characters are often in the same scene together, and at the time of writing this review, I had no clue Goth played the murderer as well. That just shows you how good of an actor she is, and she gives amazing performances as both characters.

I definitely think this film is more disturbing and disgusting, rather than scary. There are scenes that can make the viewer's stomach turn and leave them with lasting imprints of the scenes on their minds walking out of the theater. A major factor that plays into why this film does so well with the disturbing aspect is due to the brilliant cinematography by DOP Eliot Rockett. Consider the scene of the first brutal murder, when the murderer is practially decapitating the victim by stabbing him in the neck multiple times. The splatters of blood end up everywhere on the screen, and Rockett uses a red tint to shoot the rest of the scene. It sets up the whole atmosphere for the second half of the movie, which I think was expertly done by Rockett and West.

While the gore and blood is on point for this film, one problem I have with this movie is the motive behind the murderer's actions. The viewer can understand why this is happening and can perhaps sympathize with the murderer, but it seems very low-scale and unimportant for a film like this. I think West could have crafted a much better narrative and motive for the actions that take place, rather than just going off the obvious.

Overall, however, I think this is a very impressive horror film, and West is a master at capturing the magic of the horror genre. Almost everything was impressively crafted, and leaves the viewer wanting more after the credits roll. It is a great addition to A24's impressive catalog of films, and it's exciting to see what type of film West can create next for this impressive studio.