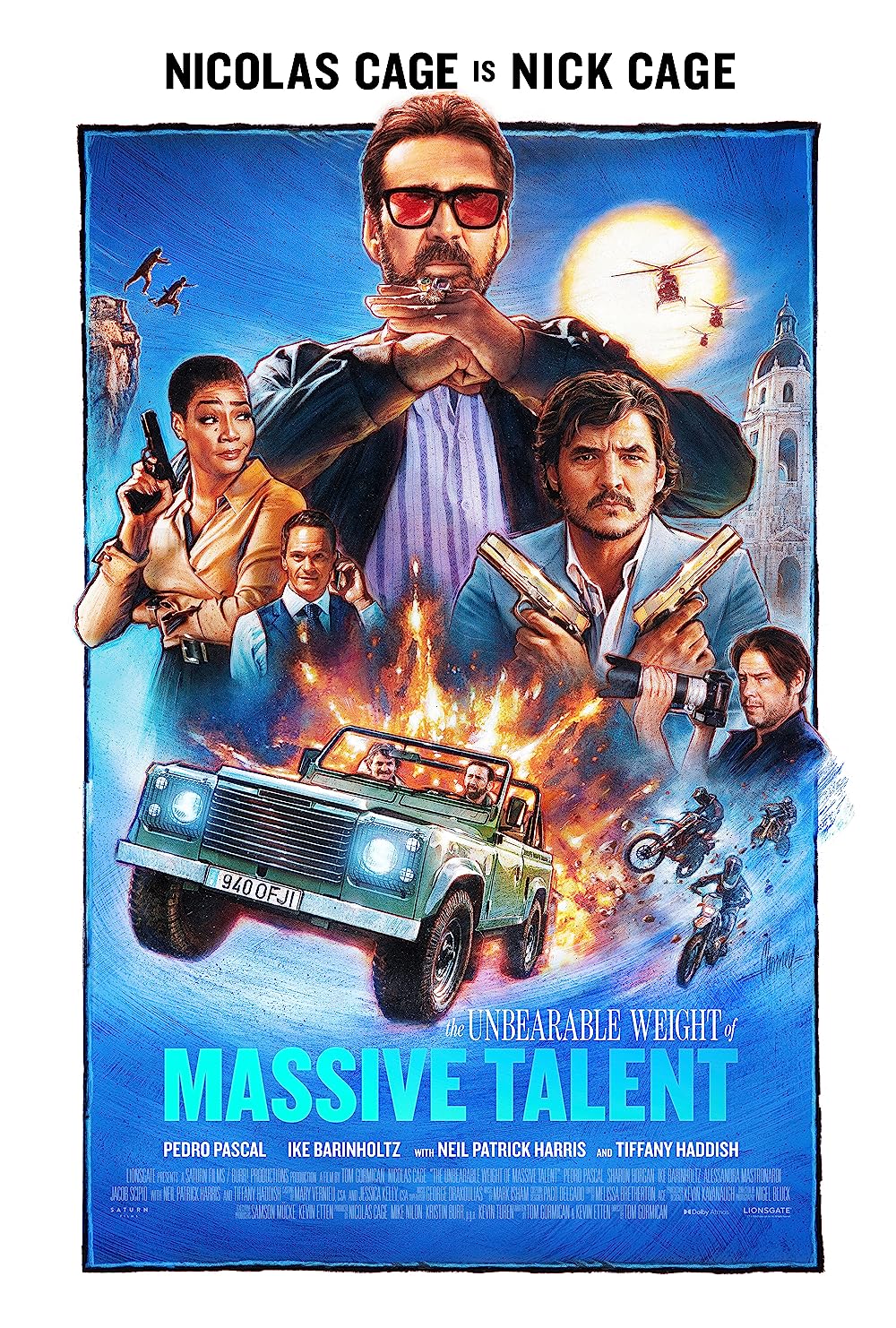 Nicolas Cage was one of the most famous action stars of the late 1990's, starring in such hits like "Con Air" and "Face/Off" to name a few. However, as he got older, his career went downhill, as he started starring in random and odd films that both critics and fans ridiculed endlessly. In addition, Nicolas Cage memes have been endless, and he is perhaps cemented in meme history. All of this is brought up in Tom Gormican's 2022 film, "The Unbearable Weight of Massive Talent", which, when announced, was described as "Nicolas Cage starring in a Nicolas Cage film about Nicolas Cage". While being a fan of Nic Cage, I was very excited for this film, but also a little nervous about if this film would be bad like his other films or not live up to the expectations set up in the trailers or by the press. Thankfully, however, this movie perfectly hits everything it was setting up, and delivers such a fun, heartfelt, joyous, and nostalgic look at Nic Cage's history, as well as his future.

The movie is obviously a fictionalized version of this famous actor, but presents a real life situation that he is going through. Evident in many of the films he has been in lately and the way his career dropped off after the late 90's/early 2000's, he is a down-on-his-luck actor who is having a lot of time finding new acting gigs. While also going through a divorce from his wife, Olivia (Sharon Horgan), and facing a massive amount of debt from the hotel he is staying at, he is forced to take a one million dollar job to attend a millionaire's birthday party in Spain.

This man is named Javi (Pedro Pascal), and is perhaps the biggest Nic Cage fan to ever live. So, when Nic Cage and him hit it off, Cage is surprised to learn that the FBI has been tracking Javi, informing Cage that he is the leader of one of the biggest crime organizations at the time. Now recruiting the actor, the FBI sends Cage undercover, trying to bring down Javi for good. This ultimately proves a challenge as Cage is not sure which path he wants to follow - betray his best friend or help the FBI take down this major criminal.

This is nothing short of a film obsessed with Nicolas Cage and his legacy, and the filmmakers did a great job portraying him and the characters in that light. It never takes itself seriously, and rather relies on the wackiness of Cage and the situations he gets himself into to further the plot along. Taking inspiration from real-life news stories about the actor, such as doing mushrooms with a burglar at the foot of his bed or singing karaoke while drunk after the annulment of his 4-day marriage to Erika Koike, the events of this movie leads him on a whirlwind journey that seems as crazy as his everyday life.

Cage has always been such a lovable actor who portrays fan-favorite characters, but this movie perhaps shows off one of his best performances in his career. While acting as a profession is hard as a whole, it must be even harder to portray a fictionalized version of yourself, relying on the words written by another person who is trying to guess what you will say and how you will act. Yet, Cage does it with such grace and hilarious elegance that he steals the show in every scene he is in.

At the same time, he is constantly competing with Pascal to be the best character in the scene. Pascal rivals Cage as a more sincere and fun character, who kind of breaks Cage out of his funk he has been through. It is extremely hard to not like Javi, but the viewer is trying to piece the puzzle together that shows him as a crime boss at the same time. Yet, with the knowledge that he is the head of the mob in Spain from the trailer, it doesn't ruin the character for the viewer, but perhaps provides a better conflict for how the viewer should feel about this character.

The movie runs at a very fast pace, picking up the plot right from the start and never slowing down until the final credits roll. The movie is jam-packed with tons of humor, that both cinemaphiles and regular viewers will both love and appreciate. Combined with the humor, the film also contains high-speed chases, explosions, guns, and so much more, which turns the film into an action-comedy when entering the second half of the movie. Like mentioned above, I think the fact that the movie doesn't take itself seriously and uses social commentary on the film while it is progressing is such a great choice for a movie about Nic Cage. It reminds me of the third-wall breaks done by the Merc with a Mouth throughout Deadpool, commenting on what has taken place in the film and what is to come next. It almost seems like Cage is unhappy to be there, but that's what makes it so much better and so much funnier.

Overall, I think this movie exceeded my expectations on every front, and is such a great and fun movie for everyone. I think every type of viewer can appreciate something out of this movie, and can have a lot of fun with it throughout. Not only should this picture rejuvenate Cage's career, but provide a standard for what comedy movies like this should be able to reach in the future.