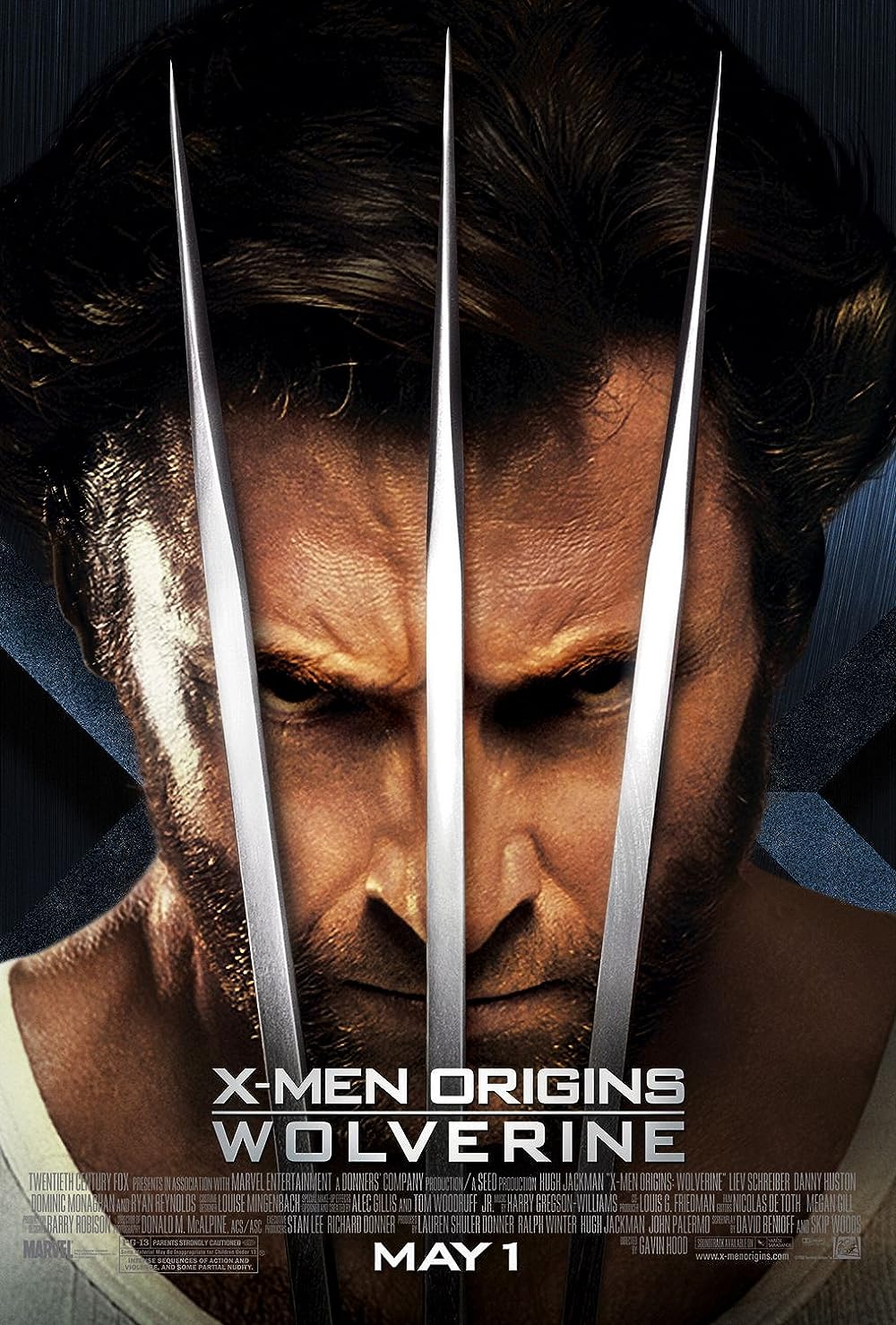 After the disastrous attempt that was "X-Men: The Last Stand", 20th Century Fox decided to try and attempt to reboot the franchise by releasing an origin film centered around the X-Men's most popular mutant - Wolverine (Hugh Jackman). In the film canon, the origins behind Wolverine have been kept in the shadows due to him losing his memory after the procedure that turned him into the mutant everyone knows and loves today. Even though this film had a great premise and hired a group of really good actors, the plot fails on every level, leaving the viewer with a bad taste in their mouth as the credits roll.

The movie focuses heavily on Jackman as Wolverine, and it shows his growth into the superhero that we see in the first X-Men film. It also shows the relationship with his brother, Sabretooth (played by Liev Schreiber in substitution for Tyler Mane in the first film), which ends up becoming the main antagonist for the film. The movie not only documents how Wolverine attained his metal claws from his bone claws, but shows his progression throughout the transformation and the attempt to take his brother down.

Wolverine is the poster boy for the X-Men films. When one thinks of the movies and comic books, images of Hugh Jackman with his metal claws pop into mind. So, there was a lot of hype around this movie when it was first announced, and fans were expecting an awesome origin film that would reboot the franchise as a whole.

However, everything but the fun acting performance from Jackman fails throughout the entire runtime. Not only does it jump around too much, but it is confusing and convoluted by many mutants that have no logical sense in being in the movie. With mutants like Blob (Kevin Durand) and John Wraith (will.i.am), they just serve as fillers when the movie is about to run out of steam and the filmmakers are hoping they can breathe new life into the next part of the film. Not only does it waste the potential of these mutants, but wastes the actor's potential in the film.

The worst case of this is Ryan Reynolds' Deadpool. Deadpool is one of the most fun and R-rated Marvel comic book ever created, and thankfully, Reynolds never gave up on this character and released two new films years later starring this anti-hero. However, with a moniker like "Merc With a Mouth", it's illogical to make it where he can't give out one-liners and insult everyone he is with, right?

Well the filmmakers certainly didn't think so, and sewed up his mouth for the final act of the film. Not only do we only really receive one great scene with him at the beginning, but they totally ruined the continuity of his character in this canon storyline. Fans and critics alike have expressed their frustration and hatred for this film due to this one storyline.

Even when you think it can't get any worse, the filmmakers waste all the millions of dollars they had for this film on horrible CGI and cheesy action sequences. The main problem with the CGI on this film are Wolverine's claws. Not only do they look incredibly fake, but they are laughable and ruin the menacing qualities of this movie. It is extremely hard to save this movie when you have claws coming out of your hand that are worse quality than some animated movies being released at the time. Then, at the same time, the filmmakers rely heavily on action sequences and explosions to further the plot along, rather than crafting unique and great plot sequences that can restart the X-Men franchise.

The only saving grace for this film perhaps is Jackman's performance, like mentioned earlier. He is still great as the titular character, and he hasn't lost the charm from the previous films. It seems like Jackman was born to play this role, and he constantly shows that through every X-Men movie he is in. I would say Jackman was dealt a very bad hand for this movie, and it's disappointing as this could have been such a great origin story for his character and plot line.

Overall, this is just a disappointing and embarrassing movie on almost every level. The filmmakers had no idea what they were doing, or what they truly wanted to come out of this film. They honestly ruined the canon for so many different characters and storylines, and thankfully, they decided to go in a much different direction for this film.