"Doctor Strange in the Multiverse of Madness" Film Review 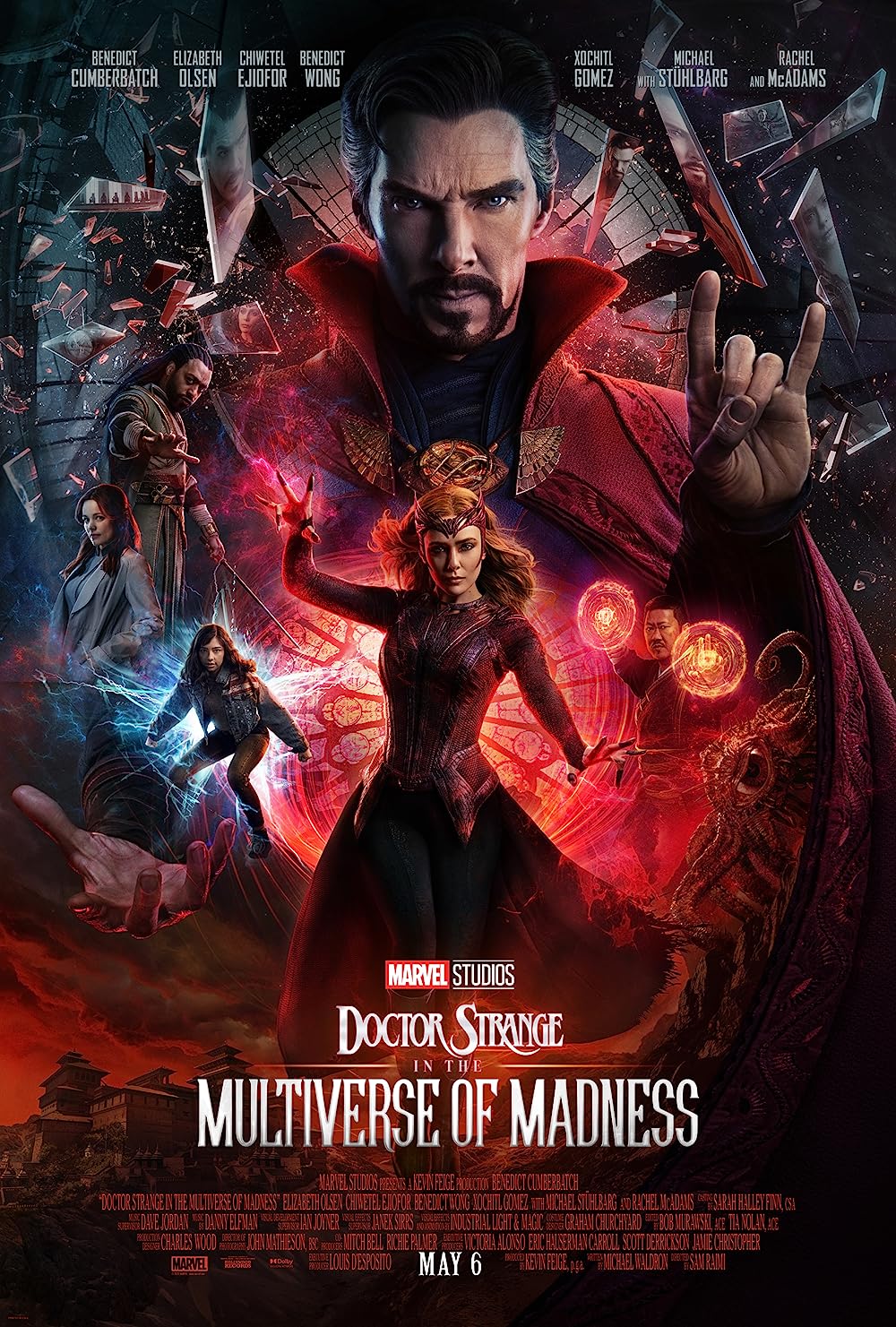 "Doctor Strange in the Multiverse of Madness" Film Review

After the events of "Spider-Man: No Way Home", there was undoubtedly a lot of hype surrounding the next film in the Marvel Cinematic Universe - "Doctor Strange in the Multiverse of Madness". Picking up where the predecessor left off and focusing on the titular character going through different universes and realities, Sam Raimi presents a more horror focused film that will lead the MCU going forward. However, there are some problems in the film unfortunately, including a messy and convoluted plot and sub-par practical effects at times.

Doctor Strange (Benedict Cumberbatch) has been through a lot since his origin story. Not only did he have to hand over the precious Time Stone to the mad titan, Thanos, but he also spent five years dusted away when the Blip happened. When he returned to his life, he was then approached by Tom Holland's Spider-Man, asking him to make everyone forget who he was after him and his friends didn't get into the college of their dreams. Even though Peter Parker gets his wish, Strange accidentally opened up the Multiverse, allowing people from different realities to jump into their Earth.

When a girl suddenly appears in his dreams at night, Stephen knows something is wrong. When she then appears in his reality the next day, she reveals herself as America Chavez (Xochitl Gomez), a young girl who has the ability to jump into different timelines. When she is being hunted by giant monsters, Strange must figure out a way to save her life, while also fighting the dark forces who want to control the multiverse.

Raimi returns to the superhero genre fifteen years after the release of his mediocre "Spider-Man 3". Yet, as his Spider-Man trilogy seemed more like a traditional superhero franchise, Disney and Marvel gave Raimi control over this film, allowing him to add in the horror genre he is known and loved for. His horror direction style, that was present in his horror films like "Evil Dead" and "Drag Me to Hell", was present in this movie, and made this film the scariest movie in the MCU so far. While it may be more tame than his earlier works, the horror aspect definitely adds a fresh, new spin on a story in this long-running franchise.

Consider the sequence when the main antagonist chases Strange and his comrades through an underground lair that looks more like a sewer. The villain is doused in blood, and is limping due to an injury previously in the film. However, it looks terrifying watching this powerful villain coming after them, and it was combined with a great jump scare that would fit perfectly in an "Evil Dead" film. Many of the horror aspects serve not only as a callback to his previous works, but as a homage to other great horror films, like "Carrie".

With that being said, it is also the weirdest and goriest Marvel film in its entire canon. With having to explore the Multiverse, Raimi is tasked with simplifying it for modern viewers who may not follow the comic books. As someone who enjoys Marvel and is educated in what is going on in the comic books and whatnot, I understood the timelines and the multiverse very well, and enjoyed what Raimi was doing with it. But, those who may not be familiar with the multiverse or comics could be very confused, which can ruin the experience for those. At the same time, with the goriness aspect and the gruesome violence in some sequences, it would turn those off the film who do not like violent films, or would take their kids to see it.

The movie tries to balance two different tones - horror and the classic MCU comedy and action that is in most of their movies. However, it seems like Raimi is having a hard time doing that. He doesn't know when to draw the line at certain moments, and tries to combine the two tones, which just ends up as a mess. It's obvious he definitely did try, but at times, it seems like the movie was directed by two polar opposites. In addition, the pacing is a tad off as well. The movie opens up with a huge, multidimensional fight sequences, which sort of sets the pacing for the movie as it doesn't slow down for the rest of the runtime. But then the movie has sequences that just have two characters talking and dragging on the film, which seemed like a bore at parts and wasn't useful to the movie as a whole.

In the acting aspect of the movie, Cumberbatch, Gomez, Elizabeth Olsen (Wanda Maximoff/Scarlet Witch), Benedict Wong (Wong), Rachel McAdams (Christine Palmer), and many more do a fantastic job in their respective roles. The last time the viewer saw Wanda was in her hit Disney+ show, "WandaVision", so it was awesome to see her back in this role and more powerful than she ever has been. For the newer characters, the casting department did an excellent job casting the actors who would perfectly fill the roles of these famous comic book characters.

On a more technical side of the film, some of the CGI or practical effects and makeup look fake or corny. Consider the scene where a zombie Doctor Strange is present. While the makeup looks very good for the most part, it looks like Cumberbatch is wearing a mask more than anything, especially around the eyes. While it is not a big thing, it would still have been nice for the makeup department to notice this and perfect the makeup, especially due to the extensive reshoots and budget this movie had. Along the same lines, some of the fighting scenes and creatures in the film just looked more fake than they had in previous MCU films. I'm not sure if it was due to the creatures being more intricate in their design or due to the fact we haven't seen these creatures before, but they could have been better designed.

Some of the deaths in the film felt kind of laughable as well. They were supposed to be these gnarly and dark deaths, but the audience in the theater laughed at most of the deaths that took place. They seemed very cheesy and not real in the slightest, which could work but didn't in a way. The filmmakers definitely could have reshot these scenes to make them fit the tone that the scene was setting up, but unfortunately did not.

Overall though, with all of the positives and negatives being listed, I really did enjoy this film quite a bit. However, not in the way of it being a great film and is one of the best Marvel ever released. It's more in a way as a guilty pleasure, something that I know is good but not great, but is still very enjoyable. This is definitely one of the few Marvel movies that could be said is not for everyone due to the subject matter and some of the graphic content present, but it is definitely a film to check out for the entertainment value if you enjoy Marvel and superheroes.