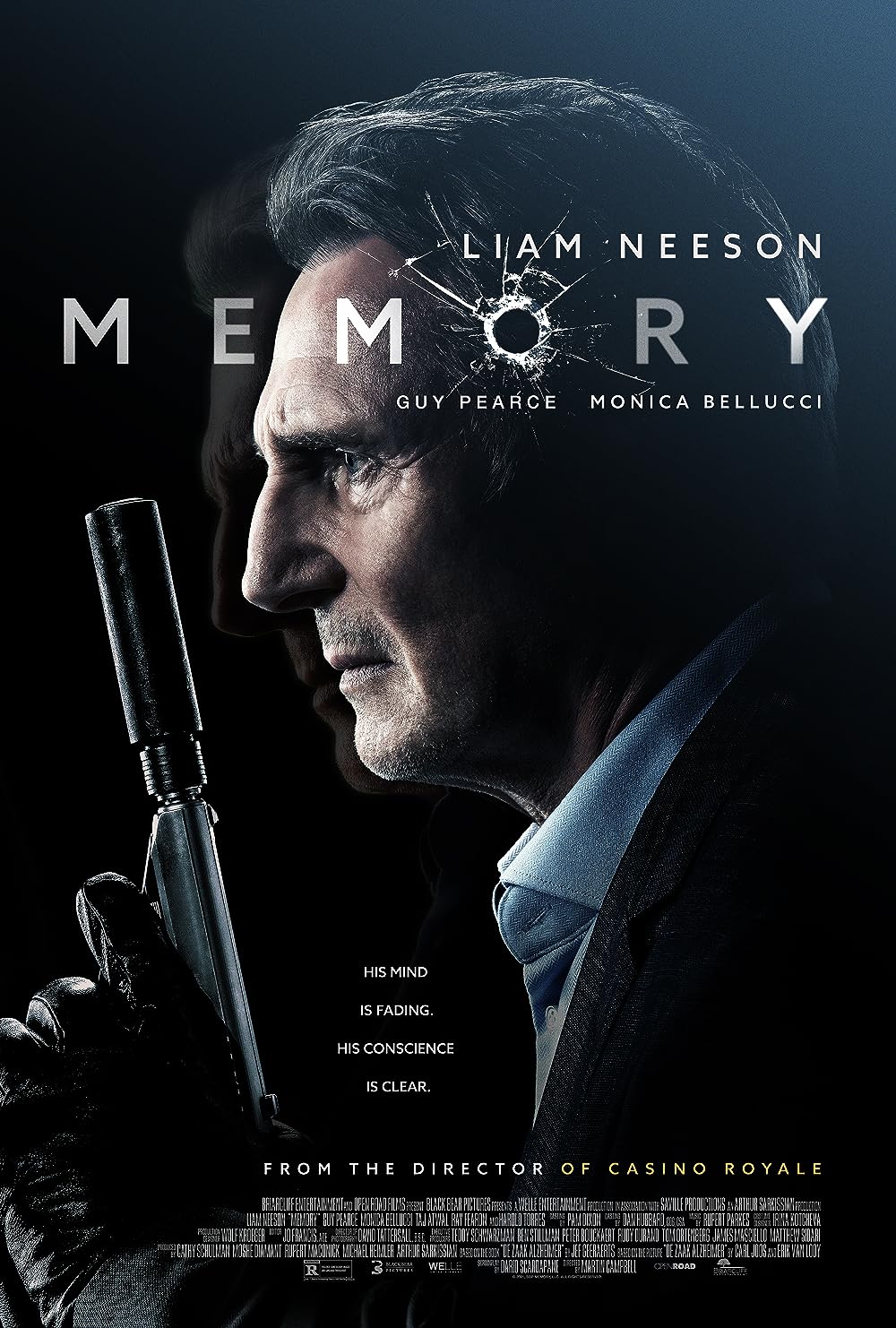 Now that Bruce Willis has retired from acting, it seems like Liam Neeson is taking his place of making disappointing and forgettable movies. His newest film, "Memory", which comes from the director of "Casino Royale", Martin Campbell, is no exception. Not only is this film forgettable, but is incredibly idiotic at times and contains nothing unique about it.

The movie follows a hit man named Alex Lewis (Neeson), who is a hitman operating in both Texas and Mexico. However, what everyone doesn't know is that he is suffering from rapid Alzheimer's, making it nearly impossible for him to complete his jobs anymore. When he is sent to take out an un-loving couple and a 13-year-old girl, he is adamant that he will not kill a child. Not only does this threaten his life, but attracts the attention of the local police force, especially one FBI agent named Vincent Serra (Guy Pearce).

This is an American remake of the 2003 Belgian film, "The Memory of a Killer", which was critically acclaimed at the time of release. The same cannot be said for this film however. Almost every aspect of this film is tired and dull, borrowing numerous storylines and plot devices from previous cop films of the same nature. In some cases, it almost seems like it steals many aspects from the Christopher Nolan film, "Memento", which stars Pearce in the leading role coincidentally.

The film seems to lose itself multiple times throughout the plot. It will remind the viewer of the fact that our main character is suffering from Alzheimer's, and then that plot line will totally be lost and have no inclusion of the story whatsoever until it pops up again out of the blue. It's easy to see what the filmmakers were trying to do with this character, but they failed on almost every aspect of it.

At the same time, the filmmakers add in scenes that have no importance to the story whatsoever. Consider the scene where Alex is injured in the previous scene towards the middle of the film, prompting the filmmakers to add in an extended scene of him fixing up the wound he suffered with alcohol and an open flame. It has no importance to the film at all, and could have easily been summed up in a thirty second sequence. Yet, because of the inclusion of these odd and unnecessary scenes, it forces the filmmakers to wrap up important scenes too quickly and ruin some of the emotional aspects that should have been present.

The same can quite possibly be said for scenes that were supposed to evoke major feelings in the viewer. For example, there is a scene that shows Alex calling Vincent in his office, taunting him with the work he has completed for the police department. However, Alex is sitting right outside of the FBI offices, and Vincent sees this. He watches as Alex talks to him, but decides to do nothing until after Alex hangs up the phone and runs away. It's very idiotic and ridiculous, especially for an FBI agent. The film, as a whole, is like this, so as the film goes on, it becomes increasingly harder to take what is going on seriously.

The acting from almost the entire cast is nothing special either, and many of the performances are dull, boring, or annoying, and sometimes all three at once. It's a shame really as Neeson and Pearce are both incredibly talented actors, but with the horrible direction of a terrible script, they can't really do much to save the film as a whole.

Honestly, the whole storylines of the police hunting down mob bosses or drug dealers from Mexico is getting really old and tiring. The entire movie was so predictable and boring as it's not a surprise as to what's going to happen next. It's interesting how any studio would produce such a mediocre plot line that has been done numerous times before.

Overall, what else can you expect from a Liam Neeson film like this? Many of the films he has made lately have been iterations of one another, and none of them are unique or evoke a serious emotional reaction from the audience. Sure, they can be considered popcorn flicks, but it's hard to enjoy them when they're as bad as this. It's going to be interesting to see how long it will take the Razzie's to introduce a Liam Neeson category, like they did for Bruce Willis a couple years prior. If the films he makes continue to be like this, I would definitely say he deserves his own category.