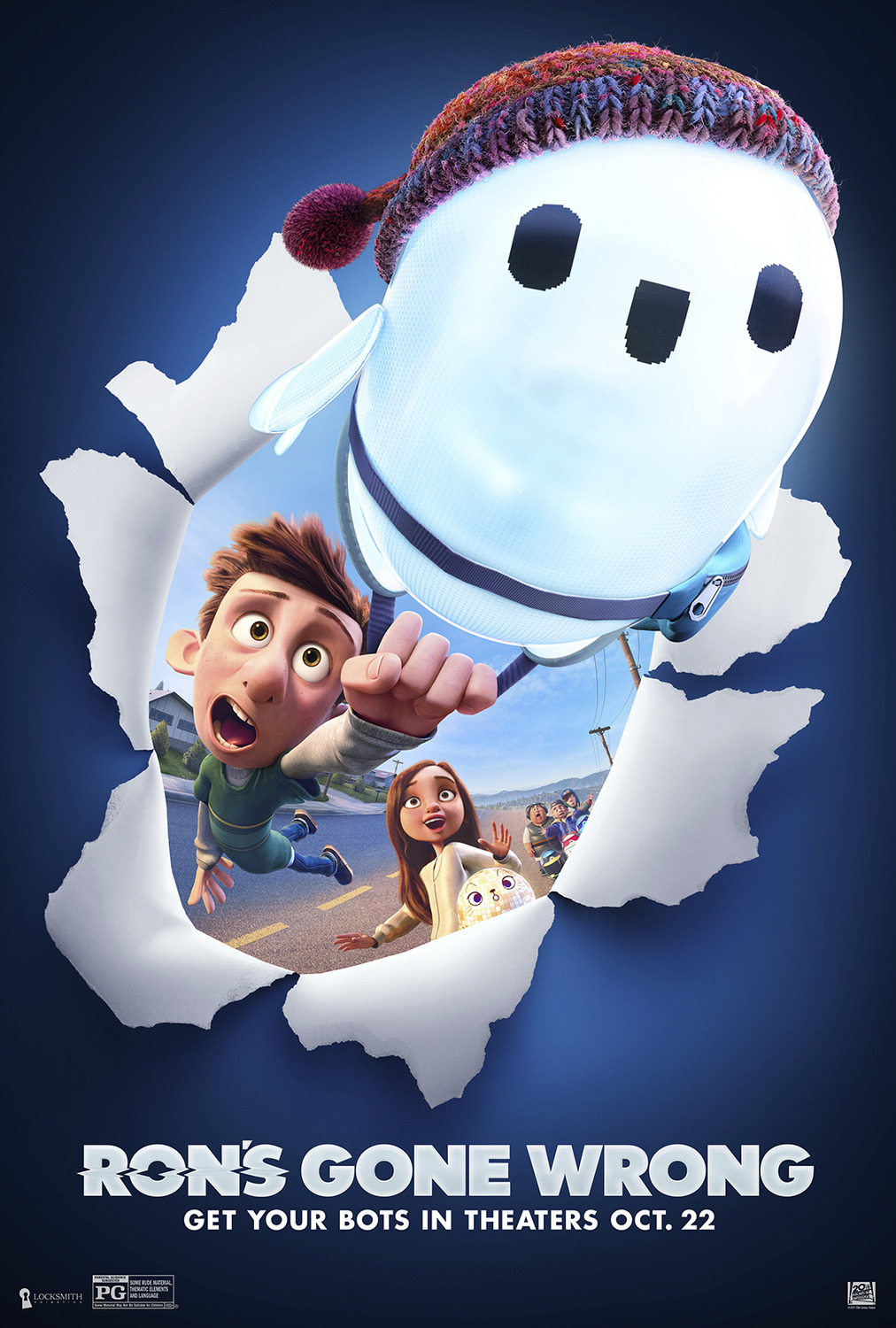 There are always different fads in middle and high school. It could be based on what you wear, what kind of cell phone you have, what kind of car you drive, etc. When someone doesn't have the item that deems them "cool", they are socially outcasted and ridiculed by his peers. This is the problem Barney (Jack Dylan Grazer) is facing in "Ron's Gone Wrong", a cute movie that has an excellent first half combined with an extremely disappointing second half.

The fad in Barney's middle school are B-Bots, a robot buddy designed by the tech giant, Bubble. They are these little robots that have a cute, little face and follow their so-called "master"'s every command. When everyone in school now owns a B-Bot except Barney, he feels isolated and doesn't have many friends due to his lack of the newest and coolest technology.

Even though his dad, Graham (Ed Helms), can't afford a B-Bot, he is able to garner enough money to buy his son the thing he wants most, but is unable to get to the store by the time it closes. What he does find, however, is a loading truck dropped a B-Bot, leaving it damaged. Thinking that it still works perfectly fine, he takes the B-Bot home to his son's jubilant surprise. However, this B-Bot, who names himself Ron (played hilariously by Zach Galifianakis) is not the same as the others due to the drop, leading Barney on the journey of his life.

This movie is absolutely hilarious. I had my doubts and reservations before going to see it, but I was pleasantly surprised by how much humor hit the mark in this film. Galifianakis gives such a wonderfully delightful performance and is so lovable as this cute little robot. I would definitely say his performance is hands down the best part about this movie, and I would love to see a movie about his robotic character by himself.

Galifianakis and Grazer have excellent chemistry together as these two characters, and is a lot of fun to watch their interactions and them becoming friends. Their interactions with the other actors are great as well. One of the best scenes in the film is when Barney and Ron are confronted by these bullies who give Barney a very hard time. When they threaten to beat both of the misfits, Ron decides to attack the bullies, which isn't programmed in the B-Bot's database. It is just hilarious watching Ron roast these bullies, and attack them to defend his best friend. Overall, Galifianakis is just great with every actor in this film, and has amazing interactions with everyone he meets.

The first half of this film is a delightfully wonderful animated film that the whole family can find enjoyable. However, when they get into the second half of the movie where Ron and Barney are on the run, the film takes a major downward turn, and delivers a very disappointing and mediocre final half. The filmmakers try to use social commentary on the effects of children using technology to convey a message that kids shouldn't be exposed to technology at such a young age. Then, at the same time, the characters of Barney and Ron completely change, and are nothing like the characters that were set up in the movie up to this point. Not only does this not fit at all in the tone or meaning of the movie, but it sort of sours the beginning of the movie.

For example, they could have concluded the film with Ron and Barney becoming the most popular kid in school and making everyone his friend. But they decide to go in a much different direction that involves them going to the Bubble headquarters due to a massive corruption inside the company. This movie then turns into a spy-like movie, that includes things like sacrifices and tears. It doesn't fit in the entirety of the first half of the movie, and it seems like two completely separate films.

It's incredibly disappointing how this film concluded. This is one of those circumstances where the ending of a film ruins the greatness of a film. This definitely deviated from being such a great film, but is able to do certain things excellently in the beginning that the viewer remembers as the credits roll. Let's just hope that the filmmakers learn from these mistakes, and are able to deliver another film that contains two great parts, rather than one.