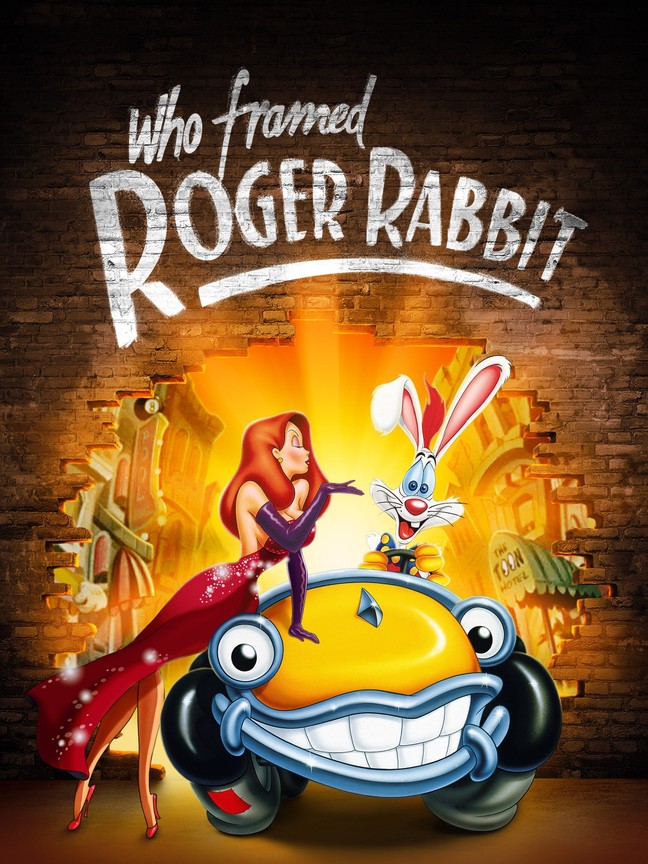 "Who Framed Roger Rabbit" is not only a spectacular comedy, but accomplishes the giant feat of successfully combining animation with live action. Disney joins forced with Steven Spielberg to deliver a movie about a cartoon rabbit, named Roger (Charles Fleischer) who has been accused of murder. Now on the run from the law, he must partner with disgraced private eye Eddie Valiant (Bob Hoskins) to help clear his name in this delightfully fresh and hilarious comedy directed by Robert Zemeckis.

The man who was murdered is named Marvin Acme (Stubby Kaye), who is the owner of ToonTown. When he is found murdered after showing Roger pictures of him and Roger's wife, Jessica (Kathleen Turner) playing patty-cake (which is a double entendre for sex), they are quick to blame Roger, and send out a warrant for his arrest. The movie then leads Eddie and Roger on a crazy journey throughout ToonTown, meeting all sorts of toons from companies like Disney, Warner Bros, Universal, and much more.

This is perhaps the only movie we will receive from both Disney and Steven Spielberg due to their ongoing rivalry at the hands of Michael Eisner, but it's a good thing their only pairing is so good. This film works on every level, and is able to entertain audiences both young and old. This film is jam-packed with both kid and adult jokes, so everyone can appreciate the humor found in this film.

The plot is fast-paced and non-stop. It seems like there is always this new challenge and adventure that our two main protagonists have to go on to clear Roger's name. They are thrown into dangerous situations after another, which turns this film into more of an adventure comedy film. It was a great decision to choose Zemeckis as the director as he had great success with the "Back to the Future" films, which I think could be closely related in tone to this film.

The characters are amazing throughout. The best character, without a doubt, is Roger. He is so lovable and goofy, and his character is great with Eddie as they are polar opposites. It seems like Roger is the side-character for a main hero, but receives his own film. It's almost like what if Ron Weasley received his own film separate from the Harry Potter franchise. I think the decision to create a character like Roger for the main protagonist was one of the best thing this film did.

At the same time, we have the character of Eddie, who is a depressed alcoholic after the death of his brother at the hands of a toon. He now despises the entire toon race, and wants nothing to do with them. Yet, when Roger literally handcuffs himself to Eddie's side, there's not much he can do to get out of helping the main suspect in the murder case. Even though he tries to act serious and show his hatred for the toons, it's easy to see behind his disguise that he actually loves helping the toons and is clouded by the hatred he has for every one of them due to his brother's death. I think Hoskins should be recognized the most for this film, as not only does he have to react to real life people, but also shoot every shot like he is talking to a toon. Hoskins eventually had to be admitted into a psych ward due to this performance as he kept seeing Roger and other toons around him at all times. If that isn't dedication to a role, I don't know what is.

Then, we also have the side characters, who consist of Jessica and Judge Doom (Christopher Lloyd). Jessica is perhaps the thing everyone remembers from this film. She plays a femme fatale in a way, a combination of Vikki Dougan and Marilyn Monroe. She basically screams sex on the outside, but as the movie progresses, you see how she is more of a smart and kind character who is madly in love with her husband and would do anything for him. Doom, on the other hand, is a villainous looking character who is terrifying in every scene he is in. He has this playfulness to him, but it doesn't cloud the fact that he is doing something both suspicious and devious. Lloyd, who is usually known for playing goofy characters like Doc Brown in the "Back to the Future" franchise, does a great job of portraying this dark character.

Perhaps the best thing about this movie is the flawless blend of animation with live action. In today's world, animation and live action is seen all over the place, and it's not much of a wow factor anymore. However, when this movie came out in 1988, they relied mostly on the animation found in Disney films like "Mary Poppins" and "Bedknobs and Broomsticks". The incorporation of live action into the animated surroundings of ToonTown takes the viewer into this magical world with them. If you watch closely, the animated characters have shadows and do stuff that viewers thought only humans can do. This movie definitely revolutionizes how animated is blended into live action, and kudos to Disney, Spielberg, and Zemeckis for taking this risk.

Overall, not only is this a very enjoyable and great film, but is revolutionary to the film industry moving forward. It helps set the precedent of what can be accomplished in both live action and animation, as well as telling a compelling comedy film with amazing characters. Since the release of the film, it has become a cult classic, and many people around the world love the character of Roger Rabbit. It even has its own ride at Disneyland in California. They may not have known it at the time, but this movie would go on to become one of Disney's most important films.