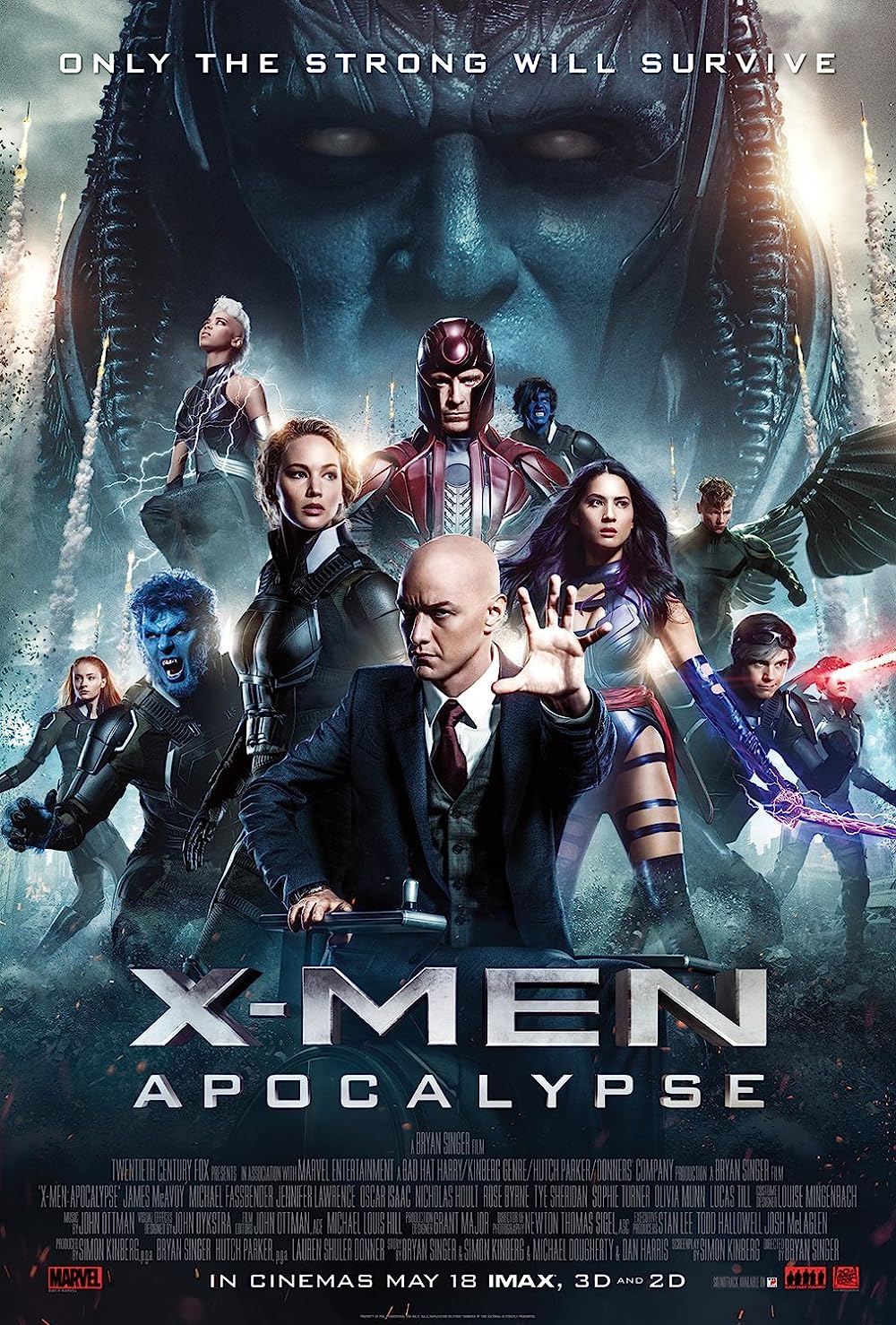 Coming off the major success of "X-Men: Days of Future Past", director Bryan Singer is now tasked with making a follow-up that is just as good as its predecessor. Relying on the younger versions of characters he worked with for the first two films of the original trilogy, Singer tries to pit our heroes against the strongest mutant there ever was, Apocalypse (Oscar Isaac). However, what he delivers is a dull mess of a film that tries to tell too many different stories at once with characters that simply do not work in this film as a whole.

The film picks up 10 years where its predecessor leaves off, starting in the new timeline that Wolverine and the X-Men created in 1973. Professor X (James McAvoy) is now starting his school back up, training mutants to learn how to control their powers and use them for good. Mystique (Jennifer Lawrence) is on the lookout for mutants to help assemble a team of mutants to protect one another. Magneto (Michael Fassbender) is now located in Poland, working in a metal factory and starting a family, attempting to leave his troubled past behind him.

Yet, when Apocalypse, a centuries-old mutant wakes up and plans to wreak havoc on the rest of the world, the X-Men are forced to band together once again to try and stop this powerful mutant and save the planet. However, Apocalypse has assembled his own team of mutants to stop the X-Men, consisting of Storm (Alexandra Shipp), Psylocke (Olivia Munn), Angel (Ben Hardy), and Magneto. Known as the Horsemen of the Apocalypse, they band together to destroy the world at any cost.

Now, this sounds like a great setup for a spectacular superhero film. The filmmakers have a great premise, a horrifying supervillain that is all powerful, and great additions to the protagonists to have a huge battle at the end of the film. This is a film that could rival the greatness of "Days of Future Past", showing that 20th Century Fox learned from their mistakes and is now bringing the X-Men franchise into the light of glory that it deserves.

Disappointingly, that is not what this film does at all. The story is confusing, convoluted, and just a downright mess. They have all of these characters who are on their own paths and brought together that it's not sure of what story it wants to tell. Each story is so drastically different in a way that it is nearly impossible to pull off a film this size and magnitude.

The most disastrous thing, however, is the main villain himself. Apocalypse was always known as such a powerful and feared mutant, and fans were ecstatic when they found out he was being brought to the screen. Yet, the screenwriters don't really know how to write a character like this, and end up failing him on nearly every level. He is clunky, dumb, annoying, and not intimidating in the slightest. He probably serves as one of the worst Marvel superhero villains put to screen yet. I would like to mention that this is no fault of Isaac's however, as I think he did the best of what he could with this horrendous script.

Then, at the same time, the rest of the ensemble cast does basically the same thing they did in the previous two films they all starred in. It's all very mediocre, and there's nothing really unique about any of their performances. All of them are very forgettable, and you're unsure of who did what almost an hour after you finished watching the movie.

On a side note, the storylines of Erik betraying the X-Men and turning evil is getting quite old. They keep trying to place it into these films for shock value, but it's so easy to figure out every time. And when they are able to defeat him for good, Charles always just sends him off with a warning and doesn't think twice about if he will attack again. It's honestly very ridiculous and quite idiotic for a superhero film like this.

However, with all of that being said, there are some good things in this movie that stand out. One aspect is the story of Magneto and the family he formed while in Poland. I know, this is such a tired superhero trope to have the man lose his family and then go on a warpath. Yet, the filmmakers craft this storyline very well, and it is nice to see a much softer and familial side of Erik. All the viewer has seen is him destroy everything in his path and try to wipe out the human race every chance he gets, so it is a very nice change of pace.

Another thing I would like to mention is Quicksilver, played by Evan Peters. Like in the previous installment, he is just tons of fun, and we get another brilliant slow-motion sequence with him. Sadly, he is barely in this film compared to "Days of Future Past", but the viewer will be overjoyed by the parts he does make an appearance in.

The sad truth is that 20th Century Fox are falling back down the same rabbit hole they did previously with the X-Men films. They are coming off two great X-Men movies, and the franchise is sadly going downhill again with this movie. It bewilders me how they are unable to put out quality superhero movies with every installment, like the Marvel Cinematic Universe has been doing. Maybe it's time to put this franchise out to pasture for good.