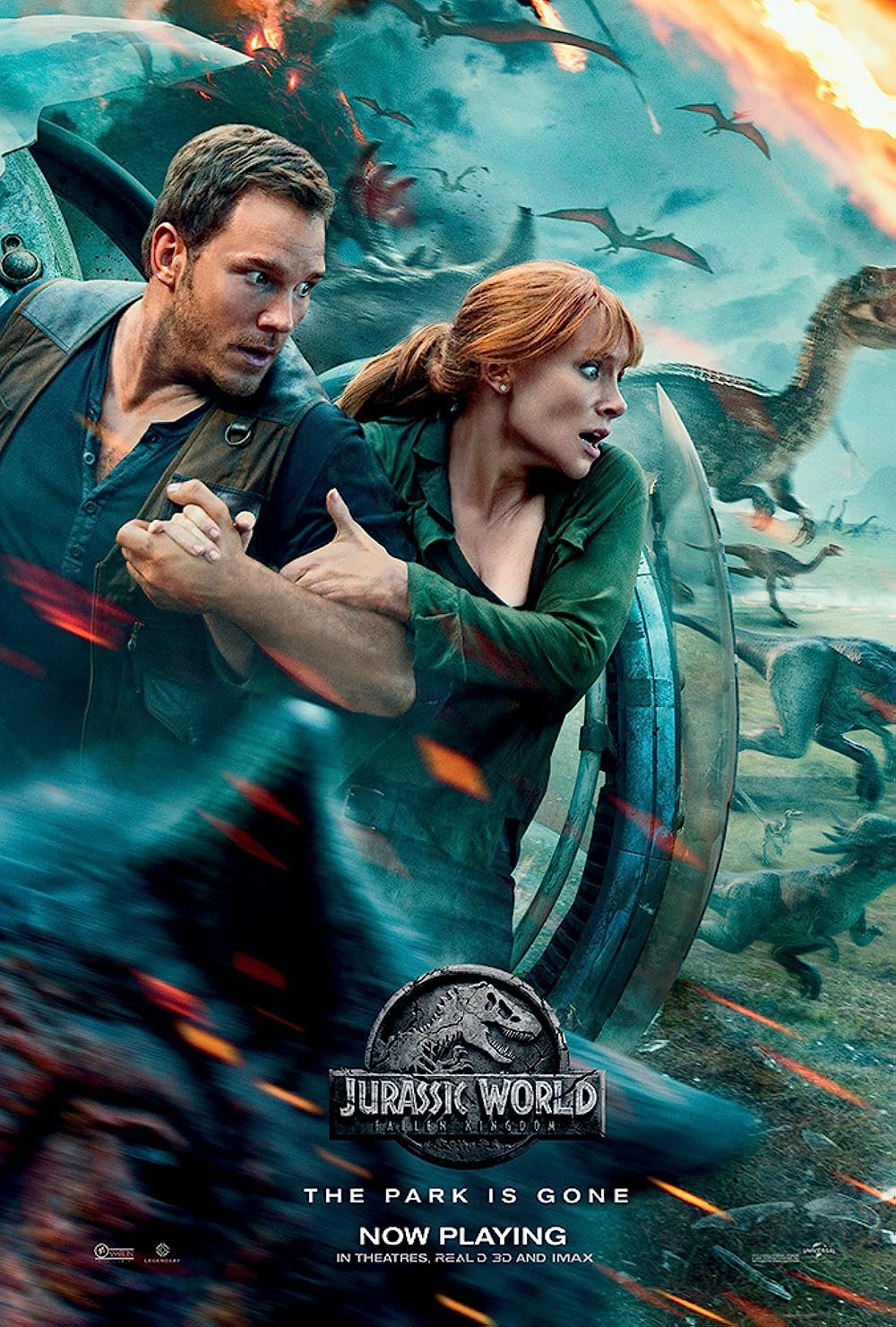 "The Park is Gone" is the tagline for the second installment of the "Jurassic World" franchise, "Jurassic World: Fallen Kingdom". As evident in the previous installment, which cemented the belief that even if John Hammond's Jurassic Park did pass inspections and endorsements, things would have gone very, very wrong, Jurassic World was destroyed by the Indominus Rex, leaving the dinosaurs stranded on the island with an active volcano. This is the basic set-up for this film, which makes me further believe that the filmmakers should have just kept the dinosaurs and characters in the park and not try to apply them to real-world logic or issues.

Our main characters from the first film are now scattered around the world, with Owen (Chris Pratt) and Clair (Bryce Dallas Howard) being the main focus of this film. Between the first and second film, the couple seems to have broken up, and have went on their separate ways. Owen is traveling the world in a van, while Claire is the leader of an organization that is trying to rescue the dinosaurs from the island.

When she finally gets her chance to rescue the enslaved dinosaurs, she jumps at the chance alongside her friends and employees, Franklin (Justice Smith) and Zia (Daniella Pineda). When she is able to recruit Owen to come along with them, things go awry while on the island, exposing a secret ulterior motive that leaves our main characters in major trouble. Now finding a way to stop the antagonists, as well as attempting to survive the whole ordeal, Claire and Owen uncover hidden secrets and terrorizing dinosaurs in this sequel to the Jurassic Park reboot.

This movie has a much different tone than the film that came before it. The first film seems to have a more polished finish to it, while this movie seems to get more down in the nitty-gritty of everything. "Jurassic World" is confined within the space of the park the movie is titled after, but this new movie globetrots with these characters and has the dinosaurs enter the real world and problems that are in the world today. For example, they bring in a storyline about black market deals and shady business, which seems like a complete shift from what we experience in the other Jurassic Park films.

In a way, it seems like this movie is two movies combined into one, and that is not a good thing for this film. The first half seems like a continuation of the events from its predecessor, and then when they move on from the island and into the real world, the movie totally changes both tonally and story-wise. I definitely think the first half is much better and stronger as it follows in the footsteps of the previous films, but the second half seems like they are trying to bring in all of these different storylines to try and seem smart and sophisticated. It almost feels like they're trying too hard to prove to be something they just aren't.

With that being said, the characters are actually very good in this movie. The viewer may have lost most of the original cast from the first film in the reboot series, but we get some very good characters, like Franklin for example. He is the comic relief for this film, and I think Smith does an excellent job of keeping the viewer entertained and laughing during intense scenes. At the same time, Pratt and Dallas Howard are impeccable as their characters and are able to carry the franchise on their shoulders. Sure, they're no where near being as good as the characters made famous by Sam Neil, Laura Dern, and Jeff Goldblum, but they are still very good characters.

Speaking of Goldblum, I feel like he has a very ridiculous and unnecessary cameo in this movie. The trailers and press images try making him seem like a major character throughout this movie when he is only in the very beginning and the very ending. It seems like a cheap shot to add in a classic character like him to just get the older audience into the theaters to see this movie.

To be completely honest, I was pretty disappointed with how this movie turned out. It could have been a great sequel to a great reboot, but it seems like the filmmakers lost their way and tried to turn this franchise into a more socially aware saga when that's just not what it is. I feel like the point of these blockbuster reboot is to entertain the audience and make them feel amazed by the magic of the dinosaurs in these movies. The reboot did an excellent job at that, but this movie just missed the mark.