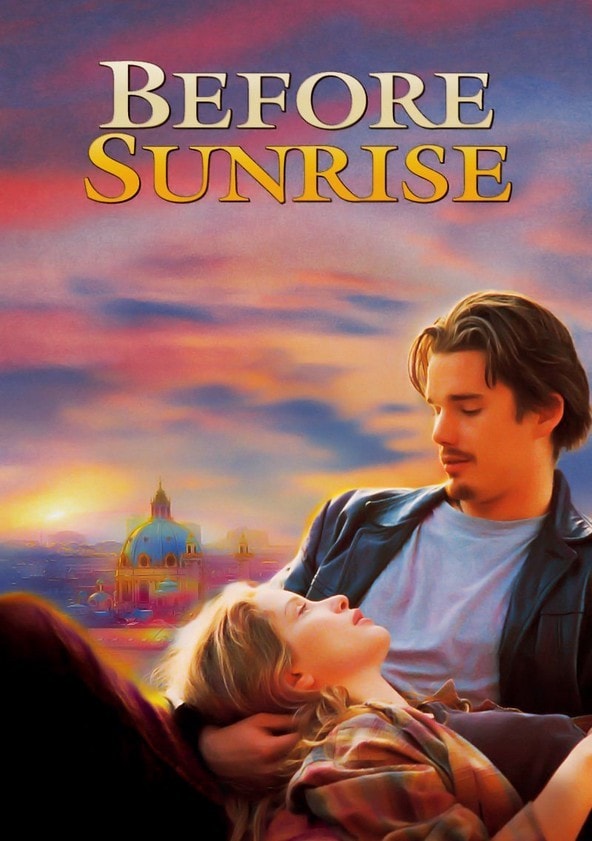 What would you do if you met the love of your life on a train, and only had that one day to spend with them? Would you do everything you ever wanted to do in a different country with that person, or would you spend your day just wandering around the beautiful city of Vienna, talking and doing whatever you come across? That is the decision our two characters have to decide on in Richard Linklater's "Before Sunrise", an absolutely beautiful and heartfelt film with spectacular performances by both Ethan Hawke and Julie Delpy.

Jesse (Hawke) and Céline (Delpy) meet on a train from Budapest, and he strikes up a conversation, both of them charming each other with their witty humor and intellect. Jesse is on the train heading to Vienna, as he is going to board a flight to head back to the States, while Céline is heading back to her school in Paris. When the train finally arrives at Vienna, Jesse gets off, but not before convincing Céline to take a chance and get off the train with him.

Now in Vienna, with barely any money and a plan of what to do, Jesse and Céline start to just wonder around the beautiful city, talking and taking in all the lights and the things they can do around the vast city. However, what they realize is that they are falling in love with one another, both of them dreading when the sun comes up tomorrow and they have to part ways. Even if they never see each other again, they will have that special 24 hours that they will be able to cherish their whole lives.

This movie is similar to Linklater's previous film, "Dazed and Confused", in the fact that there is no real plot moving the film forward, but rather the characters are doing all the heavy lifting. The plot is basically established and shown in the first twenty minutes of the movie, and then the viewer just sits back and enjoys watching these two young people, obviously head over heels for one another, walk around this beautiful city and enjoy being together.

Now, with that being said, the characters would have to be perfectly casted and performed for it to work since there are only two major roles in this film. Luckily, I think Hawke and Delpy are the perfect choices for these two roles. Hawke, at the time, basically embodied the cool guy everyone wants to be. He has that perfect wavy hair and the smile that makes all the girl go crazy. However, when you explore deeper into his character, you find that he is incredibly knowledgeable about the world, and incredibly poetic and thoughtful. Looks can be very deceiving, as clearly evident in the character of Jesse in this film.

Céline, on the other hand, is more quiet and reserved, but brave. She has to be, since she basically accepted a stranger's invitation on a whim. She's beautiful both inside and out, and is a romantic that is looking for love inside of Jesse. I don't know how he did it, but Linklater was perfectly able to create these two characters that are perfect for one another, through and through.

The only antagonist is the running clock. It's refreshing - there's no real argument between the two lovebirds, and there is nothing really that is stopping them from spending this time together and being with one another. It's an example of the classic knowledge that time will run out soon, which is unfortunately the case for this film as well. At the same time, I think Linklater is making the case for people to enjoy what they have in the moment, and to not dwell on the past or worry about the future. If people open their eyes and see what's in front of them, they can have a much happier life than those who don't; I feel like that rings true even especially for today.

Linklater does a great job of directing this movie, and I think his writing of the dialogue is superb. He is able to bring in easy chatter, but then moves onto heavy topics, such as religion and different ideologies that our two main characters share. It's obvious he took time to carefully and meticulously craft this screenplay, and he wanted to give the viewer a thoughtful dramatic piece, rather than a film about two people walking down the street and talking about stupid, boring things the entire film.

Overall, this movie seems like a modern Shakespearean piece, and does a great job of living up to that title. Linklater definitely pours his heart and soul into this screenplay, and Hawke and Delpy do an incredible job of making it a reality. The movie ends on a bittersweet, but very real note, leaving the fans to wonder what is next for these two lovebirds. No matter what happens next, it is undeniable that Linklater gave us such an amazing and real drama about two very unlikely people falling in love.