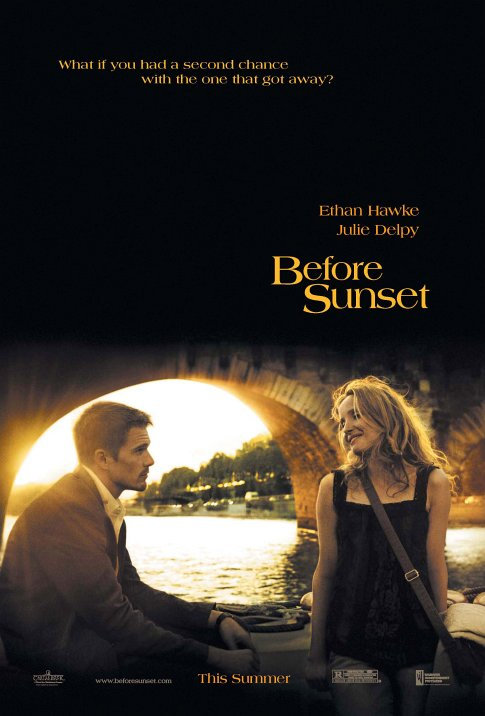 In 1995, two strangers named Jesse (Ethan Hawke) and Céline (Julie Delpy) mett on a train in Paris, both of them on completely different paths and having different reasons for being there. However, it is by chance that they meet, which leads to them getting off the train together in Vienna and spending the day and night together in that beautiful city. However, when it comes time for the two to part, they decide to not share any contact information, but instead make a vow to each other to meet up in six months at the same exact spot. The viewer is then left to wonder if they are able to meet up and be with each other again, waiting nine years for the sequel, "Before Sunset", to come out and confirm their thoughts and guesses about the couple in this film that is as good, if not better, than the original film.

The movie follows the time frame that it took for this second film to come out. Jesse is now a famous author, writing a book about his encounter in Vienna nine years ago. When he goes on a book tour, and his last stop being in Paris, the last thought on his mind would be that he would run into the former flame that the book is based upon. But, Céline attends his book press event, catching his attention. Now reunited, the former couple wanders around Paris, talking about their former romance and the reason they didn't reunite again all those years ago.

The movie is just as beautifully crafted as the first film. It contains that vibe that love is undying and never-ending. That is definitely the case of our two main characters, who never fell out of love with one another. This is evident through our two main characters, who are obviously as in love now as they were when they first met and spent the day together all those years ago.

This time around, the screenplay is written by the director, Richard Linklater, as well as Hawke and Delpy. They are able to make the characters more complex and have more of a life than in the first movie. In this film's processor, they are both young college students, trying to make it through the world]. But now, they have grown up and are taking the world on as adults, going through the hardships that others face all around the world.

What I like about this movie a lot is that not only is time an antagonist in the film, but their feelings towards each other play into account as well. They are both so deeply in love with each other, but they both moved on with their lives. Jesse is now married and has a son, and Céline is involved with a photographer. But, they can't love anyone else like they loved each other. That's a problem both of them face, so they are trying to stay closed off and guarded from one another, afraid they're going to get hurt again.

Hawke and Delpy give amazing performances once again, totally embodying these characters like they did nine years ago. It seems like they could just easily jump back into the role and pick up like no time has gone by. It makes me wonder if their characters are similar to the actors playing them as they did help write the screenplay this time, but it just seems so natural between these two artists. They have amazing chemistry together on-screen, and it is such a joy to watch them perform together.

Once again, Linklater directs everything perfectly in this film. He sets the backdrop of beautiful Paris to go along with the beautiful relationship that is playing on the screen. Everything is seemingly intertwined together amazingly, and creates this gorgeous portrait of how a relationship should be and the adventures it can take the two people on.

Overall, this is a fantastic sequel to the film that came out in 1995. It may even be better than the original, but it doesn't contain that charm you can get with a sequel. But, that's ok! This has it's own vibe and flow to go with, and I love the change that this film brings with the vibe of the original. Not only is it able to enchant viewers of all ages, but paint a picture of love between these two very unlikely characters in a foreign country.