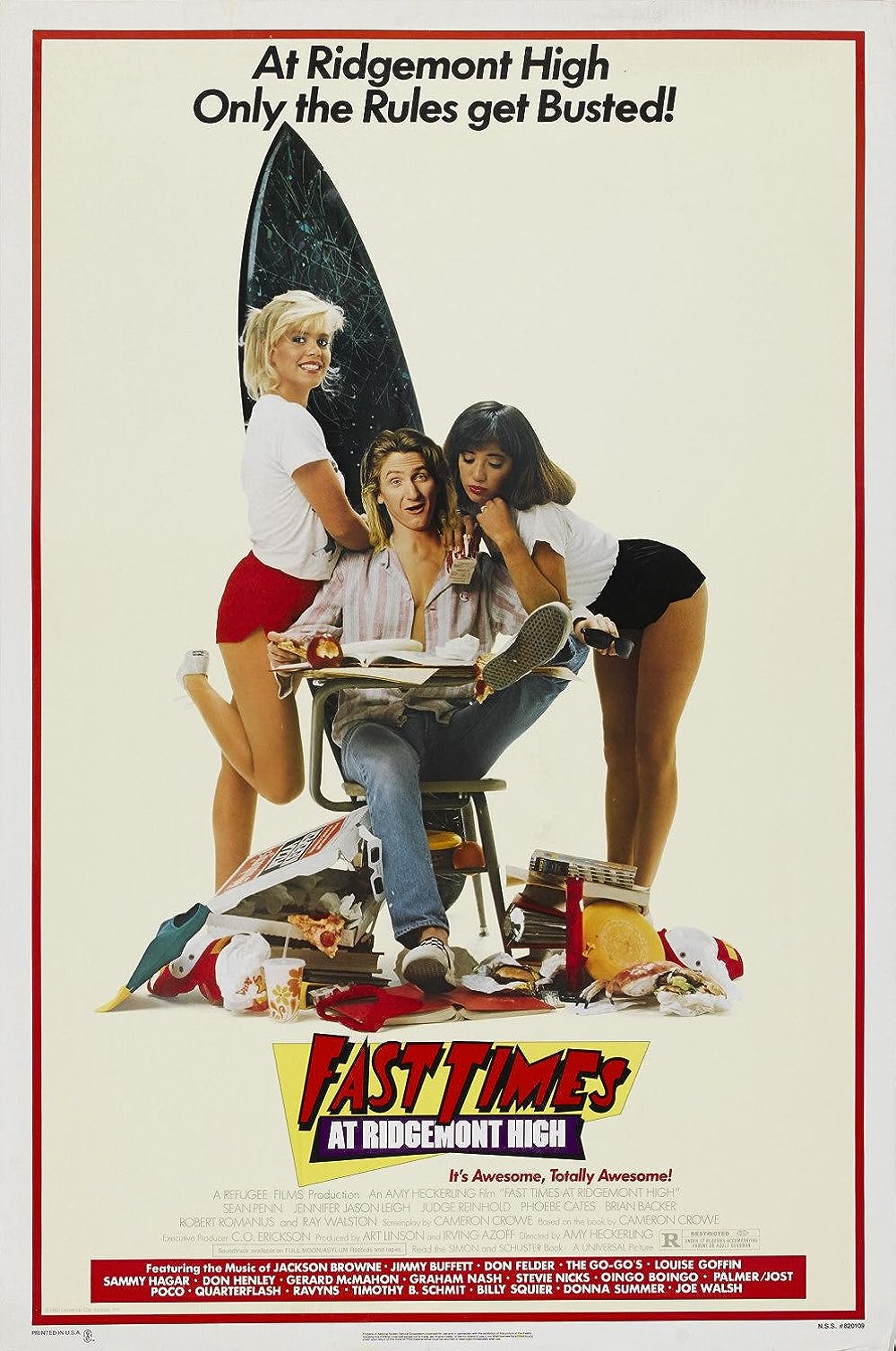 Almost everyone knows the famous moment in film history where Phoebe Cates gets out of the pool and removes her bikini top, exposing her bare breasts to the man who is fantasizing about her. That famous movie scene basically sums up the 1982 cult classic, "Fast Times at Ridgemont High", a film that revolves around teenagers navigating high school and the most important things to them at the time - sex, drugs, and rock n' roll. Serving as Amy Heckerling's directorial debut, she delivers a fun and energetic film that transports the viewers into the lives of these teenagers during the early '80s.

Serving as an ensemble film, this movie revolves around a few different characters. First, we have Stacy Hamilton (Jennifer Jason Leigh), who is involved in a love triangle with Mark Ratner (Brian Backer) and his best friend, Mike Damone (Robert Romanus). She is navigated through her love life by her older friend, Linda Barrett (Cates), who has an older boyfriend that lives in another town.

Secondly, we have Stacy's older brother, Brad (Judge Reinhold), who is a senior that has it all. He's the employee of the month at the hamburger joint he works at, has a smoking hot girlfriend, and is one of the most popular guys in school. However, when he is unexpectedly fired from his job, he must now figure out what he is going to do with his life, leading him on a downward spiral throughout his final year in high school.

Finally, we have the lovable stoner, Jeff Spicoli (Sean Penn), who is just living life one day at a time. He says in the film that all he needs is "some tasty waves, cool buzz, and I'm fine", which perfectly sums up this character. His storyline revolves around the war he is in between him and his U.S. history teacher, Mr. Hand (Ray Walston), who is an older teacher that is convinced everyone is stoned.

The movie takes on the approach of how "American Graffiti" was set up, and what films like "Dazed and Confused" would follow as well. There is no real plot or storyline, but rather witnessing the lives of these teenagers during their time in high school. It's not really hard to follow, nor does it make the viewer have to think much about it. It's practically the perfect film to put on in the background or have it playing during a movie night with friends.

At the same time, it is able to explore the lives of these teenagers perfectly, showing the trials and tribulations they must go through as they grow up and navigate the world of drugs and sex. Stacy practically only thinks about sex in this movie, and she is always trying to find a way to get laid with any guy she goes on a date with. Some may call this lewd or sleazy, but I think it's the perfect representation of how teens are and the feelings they go through during this major time in their lives.

The entire ensemble cast does a great job, but of course the standout performance here is from Penn. He is hilarious in every scene he is in, and perfectly embodies the character of the stoner surfer dude that everyone knows at least one of. It is hard to even dislike this character in the slightest, and he even convinces Mr. Hand to like him towards the end of the film it seems.

The romance between Stacy and Ratner is pretty good as well, and both of these actors have great on-screen chemistry with one another. They just make a cute couple, even if it's only on-screen. I did like the addition of having the friend come in and swoop the girl away from his best friend, but I think the storyline kind of ruined the character of Damone and makes the rest of the film seem off as it was a major event everyone kind of forgot about later on. They never really offer any real resolution for Damone's character, which is a little annoying.

Overall, I think this is a perfect teen comedy for the '80s, and is able to sum up how teens and high school were during that time. This film has definitely stood the test of time, with people still quoting and bringing up this film in pop culture. You can tell this is a good film as it still has a major impact on today's society for a high school film that was made forty years ago.