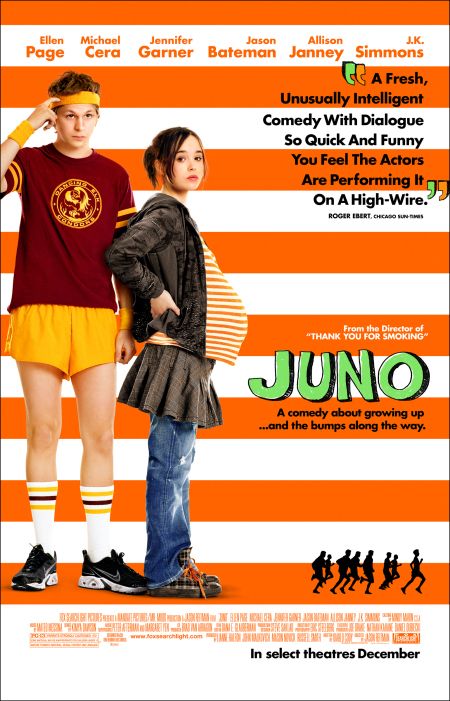 High schoolers have a lot to worry about in their four short years of school before they graduate and start their lives. There's tests, sports, fitting it and making friends, dating, and much more. But for Juno MacGuff (Elliot Page), she has to worry about the baby now growing in her belly from hooking up with her best friend, Paulie Bleeker (Michael Cera). This film from Jason Reitman is both hilarious and heartfelt, and contains possibly one of Page's best performances.

Juno is now faced with two possibilities since she doesn't like she's ready to be a mother - abortion or give the baby up for adoption. When she can't bring herself to abort the fetus growing inside her, she turns to the papers, where she finds a seemingly loving couple named Vanessa (Jennifer Garner) and Mark (Jason Bateman). Now tasked with caring for this baby during the pregnancy and delivering a healthy child to the expecting parents, Juno must face the responsibilities of an adult, while also trying to get through high school and her own personal feelings.

Reitman, who is the son of famous director Ivan Reitman, takes perfect care of Diablo Cody's script. He is able to turn these characters into these beautifully flawed versions of themselves, showing the real world problems they face with real world attributes. For example, in Juno's eyes, the couple that is adopting their baby seems perfect. They seem very much in love, and they have the perfect life, the perfect house, the best lawyers, and just seem like they would be amazing parents to this new baby. But, deeper down, we find that these characters are not happy, and don't have everything they would want in life. It shows how to not judge a book by its cover, and that seems to be a major theme throughout this entire film.

Consider our pregnant protagonist and all of the things she has to go through. There's this misconception around town about her that she's a slut and a downright horrible person that people should stay away from. However, in reality, she's actually a scared, yet amazing person, and I think that is due to Page's fantastic performance in this role. Filming this movie before his transition into a male, Page does a fabulous job of totally embodying this character that he is playing, and gives her a fun and amazing personality. She is the bread and butter of this movie, and almost every scene she is in will get a chuckle out of somebody watching this movie. She's quick, witty, and always trying to lighten the mood, even if she is unsuccessful. But, at the same time, she's hurting deep down. She doesn't know what she wants, and that influences many of the decisions she makes throughout the movie.

The supporting characters in this film, such as Bleeker, Vanessa, Mark, and Juno's parents, Mac (J.K. Simmons) and Bren (Allison Janney), are fabulous as well. The actors playing these characters are able to fully embody these roles and deliver these flawed, yet fun characters that are a joy to watch. Mark and Vanessa are seemingly so excited about having this baby, even though the husband is having some reservations. I couldn't imagine any other actor playing these characters than Garner and Bateman. They have these two personalities that makes them seem polar opposites to one another, but they work so well together for some reason. It's hard to explain, and you'll just have to watch the movie to understand what I'm talking about. Then, at the same time, Simmons and Janney are perfect choices to play the parents of our main protagonists. As characters, they are both very blunt, which is spot-on casting for these roles as these two actors are known for not holding back. But, in addition to that, they are able to be very supportive and comforting to their daughter, which is a refreshing thing to see from these two as they are usually known for playing tough and sometimes cruel characters.

To be completely honest, I'm not a huge fan of Cera's work throughout his career. I feel like sometimes he tries way too hard to be funny in some roles, like in the film "Scott Pilgrim vs. The World", where I feel like his character completely ruins the movie in some ways. However, he is great in this movie, and totally embodies the role of the geeky track kid who is dating the pregnant girl at school. He is awkward and nerdy, but never cruel or mean to anyone. He is just this kid trying to get by in life, but Cera is able to let his personality shine through the character, which was a joy to watch.

Overall, this movie isn't just another teen comedy, but also a beautiful coming-of-age film that is very heartfelt and deals with real problems that people face in the world. It thankfully ends on a happy note, showing that there are many ways to overcome some obstacles and challenges. If anything, this movie inspires and motivates people going through the same thing as the characters in this movie, and isn't that what people should get out of a movie like this?