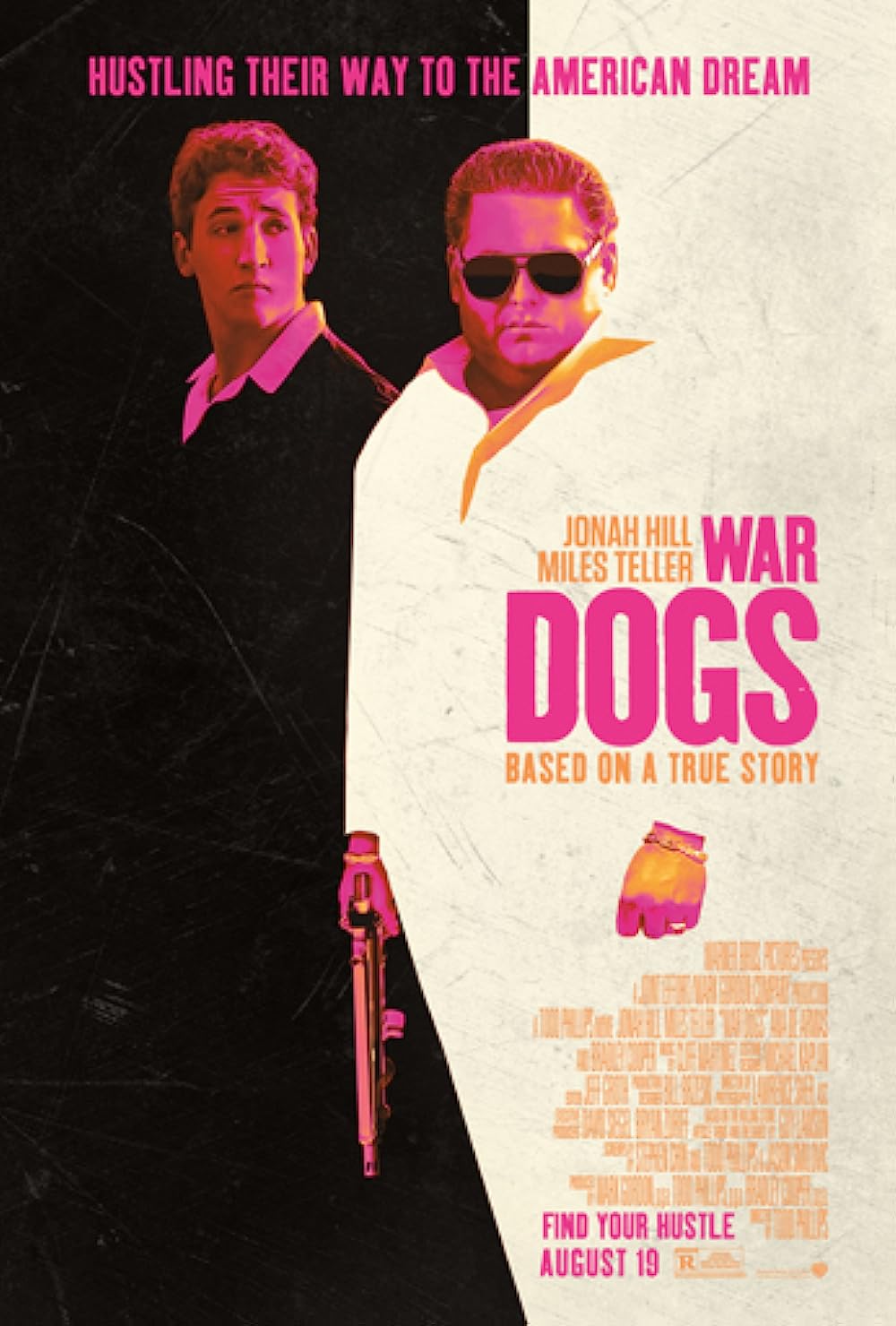 There are many films that have been made about the American Dream, mostly people committing crimes and fraud to get their fame and worth. There are gangster films, such as "Casino" and "Goodfellas", and then there are more true-story films, like "The Wolf of Wall Street" and "Catch Me If You Can". Todd Phillips, who was known for doing more comedy-based films at the time, decided to do his own take on this type of drama/crime film, which is a movie centered around two men in their late-20's becoming international arms dealers and committing federal crimes throughout their partnership. This movie, which stars Miles Teller and Jonah Hill in the lead roles, is incredibly entertaining, but has some flaws that hold the movie back.

The two men in question are David Packouz (Teller) and Efraim Diveroli (Hill), who grew up and went to school together. When David is down-on-his-luck as a massage therapist whose male clients want more than a back massage, he has to try and figure out new ways to make a living. When his girlfriend, Iz (Ana de Armas) reveals that she's pregnant, David starts freaking out and will do anything and everything he can to provide a life for his new family.

That's when Efraim moves back home. He is known by his friend and family for making tons of money with his uncle, so when he finally moves back home, David tries to get involved in whatever his old friend is doing. That is when he finds out he is in the arms dealing business, which is booming due to war in Iraq. Together, they decide to purse a partnership that will let them expand their company, and sell weapons and ammunitions to the United States Army. Throughout their partnership, they have gone through tons of hardships, including fraud, international felonies, being on the battlefield, and much more in this larger than life true story.

To start, this movie is simply widely entertaining, just like many of Phillips' movies are. He has this talent to make every scene in his films entertaining and fun to watch, no matter what movie or scene it is. He is able to add in comedy, both light and extremely dark, to help further the plot along and make it more different compared to films like this. But, that's the thing: there are so many different films that fall under this genre and follow the same classic plot tropes. We know the characters are going to get very successful and make tons of money, but at the same time, we know they're going to get caught in the end. So, Phillips tries to shake it up and keep the viewers on the edge of their seat. Unfortunately, however, he turns this movie into more of a farce and satirizes this genre multiple times, whether it is purposefully or not.

At the same time, Teller and Hill give fantastic performances, and can be held responsible for making this movie so entertaining. It is so much fun watching these two fantastic actors work alongside one another, and bring these bonkers and crazy characters to life. They have excellent on-screen chemistry, and there is something about each of their characters that makes them stand out and are so unique to one another. It seems like these two actors are actually best friends in real life and spend a lot of time together, which is what is key for any film like this to succeed.

However, and it's nothing due to their performances but rather the writing of their characters, it's hard to hate these characters, and that's a problem. Now sure, we love Jordan Belfort in his movie, but we know at the same time that what he did is extremely wrong and we don't really have sympathy or remorse for him. The same can't be said for this movie. David's character is so likable and relatable that Phillips makes it where there's no real fault for him. He still gets out ahead at the end of this movie, perhaps more than he deserves. As the credits roll, we don't feel any hate or ill-will towards his character, even though he committed several crimes and even screwed over the U.S. military. Sure, he regrets what he did and doesn't want to be involved in any of that, but at the same time, he needs to be held somewhat accountable for his actions and involvement in the company.

The other actors in this movie, such as Bradley Cooper and de Armas, do give good performances in this film, but the only unfortunate thing about it is that they aren't given much larger roles. I think Phillips could have easily expanded the roles of both of these characters, and give the actors the chance to shine in these roles. I think it could definitely open the movie up more, and give more reasoning behind some of these characters' actions.

As stated many times, this movie is without a doubt incredibly entertaining and fun to watch. You won't feel bored or tired watching this film, but there are definitely certain aspects that Phillips could have done to make it an overall better film, for both the plot and characters. However, it seems like he made the film he wanted to make, which is definitely important in any aspect of filmmaking. And, with saying that, I would definitely watch this film a few more times. It's just unfortunate that he didn't take the time to craft the plot and characters and deliver a much better film.