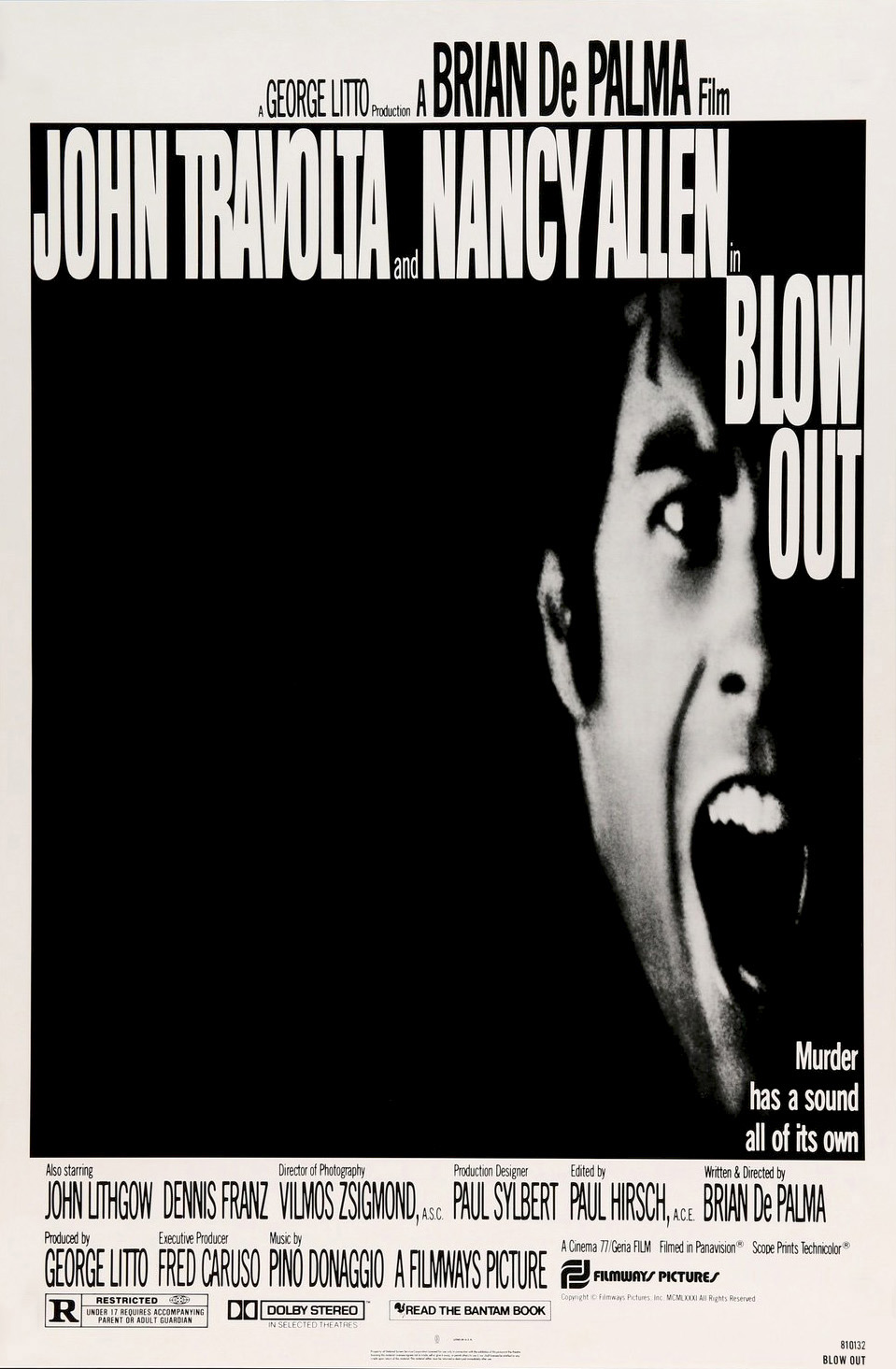 If Michelangelo Antonioni's "Blow-Up" left many aspects of the film to the viewer's interpretation, then Brian De Palma's "Blow Out" answers all of those questions. Instead of focusing on whether or not a fuzzy negative shows a dead body, John Travolta plays a sound man for a B-movie factory who captures the successful assassination attempt on the life of a presidential candidate, leading him down a rabbit hole that risks his life every step of the way in one of De Palma's best films.

The assassination attempt shouldn't have happened though, as the job was to only catch the candidate in bed with a prostitute (played by Nancy Allen) to ruin his career. But, when they hire a psychopath for the job (John Lithgow), who likes to kill people for sport, he decides to take out the candidate, rather than just expose him to the public. Since Travolta's character Jack gets the whole thing on a sound recording, he recruits the help of the prostitute, Nancy, to find out what really happened and why.

However, as it gets reveled to the public that Jack has this tape and is attempting to piece together what really happened, he puts himself in more danger than ever. Now with a target on his back, Jack must do everything he can to reveal to the police this "conspiracy theory" he has created, as well as clearing Nancy's name and involvement in this whole thing.

This film is, without a doubt, directly inspired by Antonioni's classic British thriller. It is not a remake or a rip-off however, as the movie is exploring a different side of the story that we didn't see before. Antonioni's film is more secretive and doesn't let the viewer know much, leaving it to their imagination on what happened in that park and whether or not the blurry image contains a dead body in it or not. De Palma decides to answer all of those questions for the audience, telling them what happened, why it happened, and the aftermath of all of that. This is a much more straightforward film, but is honestly De Palma at his best.

The movie doesn't feel convoluted or confusing, but rather unfolds the plot throughout the runtime quite nicely. It doesn't have to swing for the fences or anything, and it provides a nice and easy plot to follow that is also very entertaining and quite smart. It contains these twists and turns throughout, and when you finally think you have it figured out, you are sorely mistaken.

Travolta and Allen give great performances throughout this film. As the film progresses, you can see Jack's sanity decline more and more, making him a more crazed and obsessed character over what he captured on the audio recording. Nancy, on the other hand, is such a sweet and kind character, and it makes the viewer feel bad for her getting roped up into this type of business. She wants to be a makeup artist for the movies, but thinks this is her only real way for her to earn enough money to achieve her dream. It's really unfortunate, and she is turned into this tragic character that the viewers will love when watching this movie.

I really like how De Palma progressed their relationship throughout the movie. They start off as strangers who are intimidated by one another, and then turn into a couple that want to be together, but know they should finish this problem first. It's heartwarming to see how they interact with one another towards the end of the film, where Nancy is meeting with a news reporter to hand over the tape, prompting Jack to put a wire on her. It's sweet to see how comfortable she is with this sound man, and De Palma instantly switches that on its head, showcasing a horrifying scene minutes later. But, the cool thing about this movie, is that De Palma comes back full circle, relating the very first scene of this film with the final moments. It's. hauntingly beautiful, but shows how masterful of a filmmaker De Palma is.

Of course "Scarface" and some of De Palma's other films are amazing and he can be hailed as one of the best filmmakers at that time, but there is something about this movie that stands out to me over the rest. I love the plot, the characters, the flow of the movie, the suspense, the score, etc. I think De Palma took this idea he had, and made a modern masterpiece.