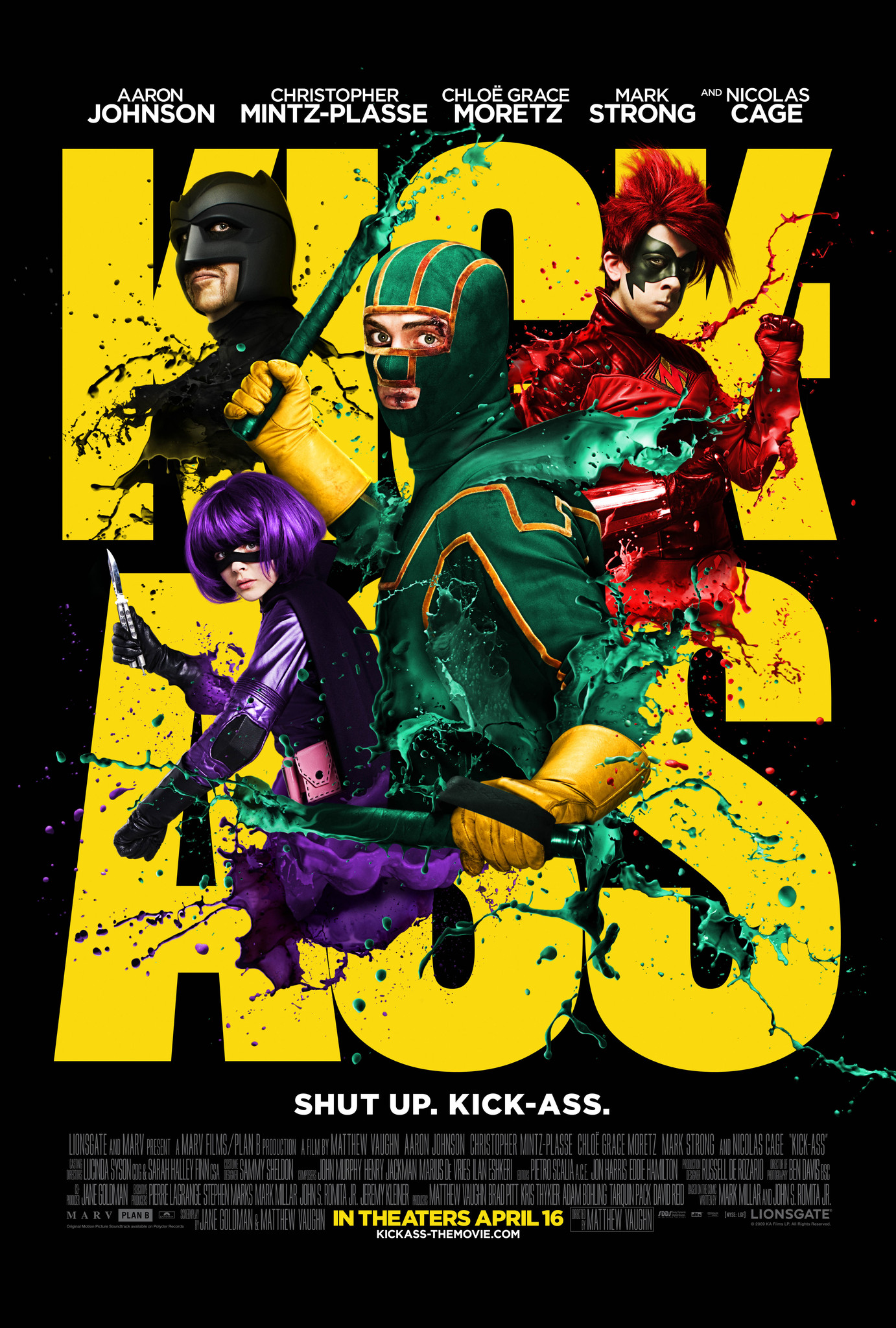 Growing up, millions of kids are enamored with superheroes, wowed by the awesome powers and abilities they have. That love is felt for superheroes especially now, with the Marvel Cinematic Universe and other superheroes being front and center in pop culture today. Because of this love for superheroes such as Iron Man, Batman, and many more, it aspires children to want to be like their favorite heroes, fighting crime and saving humanity. That is the main focus of the plot of "Kick-Ass", a great satirical comedy that focuses around one ordinary teenager's want to be a crime-stopping superhero.

That kid is Dave Lizewski (Aaron Taylor-Johnson), a teenager who is just trying to navigate high school and all of its challenges, while also dealing with the untimely death of his mother. He is searching for a way to escape his reality, which gives him the idea of donning a superhero costume and going out and fighting crime. Now going around with the superhero name of Kick-Ass, he achieves instant popularity across the country due to being the first "real superhero".

His bravery and new superhero persona inspires others to do the same, especially Damon Macready (Nicolas Cage) and his daughter Mindy (Chloë Grace Moretz), who go by the superhero names of Big Daddy and Hit Girl, respectively. Sometimes teaming up, the new crime-stoppers take out the scum of the city, making it a better place for everyone to live. However, when you introduce heroes to the world, you have to expect some villains to come along as well. Kick-Ass and his superhero pals are then targeted by crime boss Frank D'Amico (Mark Strong), who recruits his son, who has donned the name Red Mist (Christopher Mintz-Plasse) to help bring the superheroes down.

This movie satirizes all of the tropes of a superhero comic perfectly, adding in all of the elements that would make this story humorous for those who are a fan of superheroes. At the same time, it can even please the non-superhero fans by using its cast strengths and charms to wow the audiences. The plot moves pretty quickly, and doesn't seem to elongate any of its parts unnecessarily.

Taylor Johnson was a great choice to play the titular role in this film. He is that geeky and awkward kid, but oozes charisma and charm. It is very hard to not like his character, and you are rooting for him before he even suits up as the superhero for the first time. The same can be said for Mintz-Plasse's character, who is odd and quirky, reminiscent of his time as McLovin' in the comedy, "Superbad". He seems like a whiny and spoiled brat who is misunderstood, but Mintz-Plasse plays that perfectly.

However, I think it is fair to say that Cage and Grace Moretz absolutely steal the show in this film, especially the latter. They are both these awkward and quirky characters who ooze charisma and charm, but are so oddly satisfying that you can't help but love them. They seem like the average American wholesome family until you hear the child start using strong profanities and killing men twice her size. It's shocking and over-the-top, but it fits perfectly in this movie in so many different ways. The only complaint I do have for this film concerning these characters is that we didn't see enough of them.

I think for a satirical film, it is still pretty badass at parts. Whether it's Hit Girl killing people by throwing knives at their faces or Kick-Ass blowing up bad guys with a bazooka while using a jet pack, there is no doubt that the audience won't be blown away by some of the special effects and choreographed fight scenes in this movie. Now, it's nothing to write home about due to the main superhero films blowing the competition out of the water in the effects and fighting department, but it is still pretty damn good for a film like this.

Overall, I think director Matthew Vaughn delivers a near-perfect superhero satire that delivers on everything I would want for a film like this. Sure, it's cheesy and corny and nowhere near as good as some of the films from the MCU, but for entertainment purposes alone, I think this film accomplishes its job in more ways than one. It's definitely hard to not like this film, and even harder to not have a smile on your face while watching it.