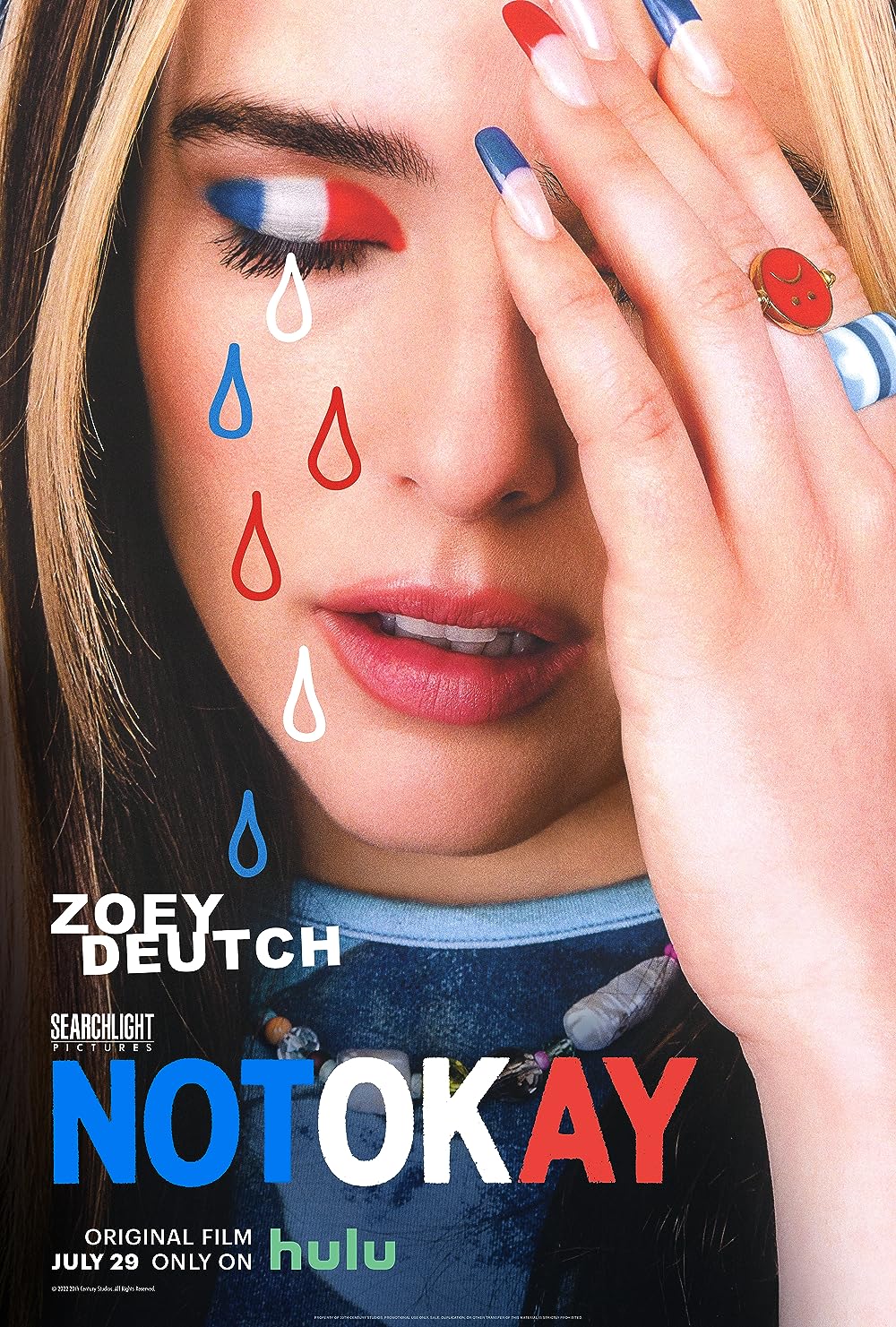 Social media is one of the biggest things in today's society. People are obsessed over how many likes they get, how they are perceived by everyone else, getting verified and worrying about your follower count, etc. At times, social media can be a very good thing, allowing people to connect or spread positive messages when the world needs it the most. But the majority of social media is toxic and consumes people in every aspect of their lives. The latter is how social media is portrayed in "Not Okay", a film where writer and director Quinn Shephard shows how social media and caring about public perception can be detrimental to one's mental health.

The movie revolves around a girl named Danni (Zoey Deutch), who doesn't really know where she fits in in today's society. She can't be apart of the BLM movement, the LGBTQ+ community, any minority group, etc; it leaves her feeling like she is an outcast and doesn't belong. She tries way too hard to be something she is not just so people can like her. So, when Colin (Dylan O'Brien), who is a successful influencer on social media, pops up in her life at work, she decides to do whatever is necessary to get his attention.

This involves her faking a trip to Paris by photoshopping her photos on Instagram to make it seem like she is actually in another country. However, when terrorists attack multiple locations in Paris, she is now in the sticky situation of coming forward and telling the truth or lying to protect herself. She of course chooses the latter, making her an activist for terrorist attacks across the country due to an article she wrote. Yet when she develops a close friendship with a 17-year-old school shooting survivor named Rowan (Mia Isaac), she is stuck between a rock and a hard place concerning whether or not she should come clean, or stay hidden behind her lie forever.

This movie tackles the struggles and stresses of the online world today, and I think it does a perfect job of summing up how people are in society. Danni is the type of person who's only care is about what people think of her, rather than trying to go out and make friends being who she is. But, then we have people like Rowan, who is trying to spread awareness for the problems in the world today, while also trying to just live and enjoy life as a teenager after a tragic accident that no one should have to go through. In the end, you see which type of person is more successful and happy.

The movie opens up with a disclaimer saying that it has "flashing lights, themes of trauma, and an unlikable female protagonist". I think that is only true to a certain extent, as the protagonist of Danni isn't likable, but isn't not likable at the same time. Her actions in this film are horrible and shouldn't be condoned whatsoever, but at the same time, you can't help but feel for her and want to like her. Deutch does a great job of bringing this character to life, and she really breaks down these walls that our main character has put up for everyone else. She's funny when she shouldn't be, and tone-deaf when she should be more respectful to the situation at the hand. Consider the scene where Danni is stalking Rowan's social media account after their first interaction. She posts a photo supporting gun laws in America, prompting many people should comment on the post in support. Then, we have Danni, who comments "Skin goals" on the same post. It is shockingly funny in a way, which is pretty common throughout this movie.

I think Shepherd does a great job of directing this cast and writing the script. The plot moves on at a very quick pace, and never finds time to slow down or bore the audience. She is able to find humor in such tragic situations, which I think works perfectly in this film. But at the same time, she is able to raise awareness for real-life events that have inspired some of the plot details in this movie. So, it could be classified as satire in a way, as well as being hailed as a movie that furthers the proactive activism for issues in America today.

One thing I would like to mention is how O'Brien steals the show in every scene he is in, and is a great addition to this film, in my opinion. It is very odd to see this actor play a role like this, and I'm all here for it. He is kind of stupid, but he is smart where it counts. He knows how to make engaging content for social media, as well as how to charm his women audience. I personally love the scene towards the conclusion of the film, where Danni is sobbing while heading to the elevator. The elevator opens, and Colin steps out, smoking weed like he does in every other scene of this film. He then starts to act confused and ask what is going on in a very idiotic manner, which is honestly one of the funniest scenes in this movie to me as it is so off-guard and unexpected. But, at the same time, Shepherd shows how these people that we look up to or want to be may not always be the best people in real life.

Out of the many films that have been released concerning social media, I think this one kind of captures it the best. It perfectly shows how social media can damage our society, as well as putting down our phones and just focusing on what we have now in front of us. It is hauntingly beautiful in a way, and I think this can show the younger generations how detrimental and toxic their favorite apps on their phone can be.