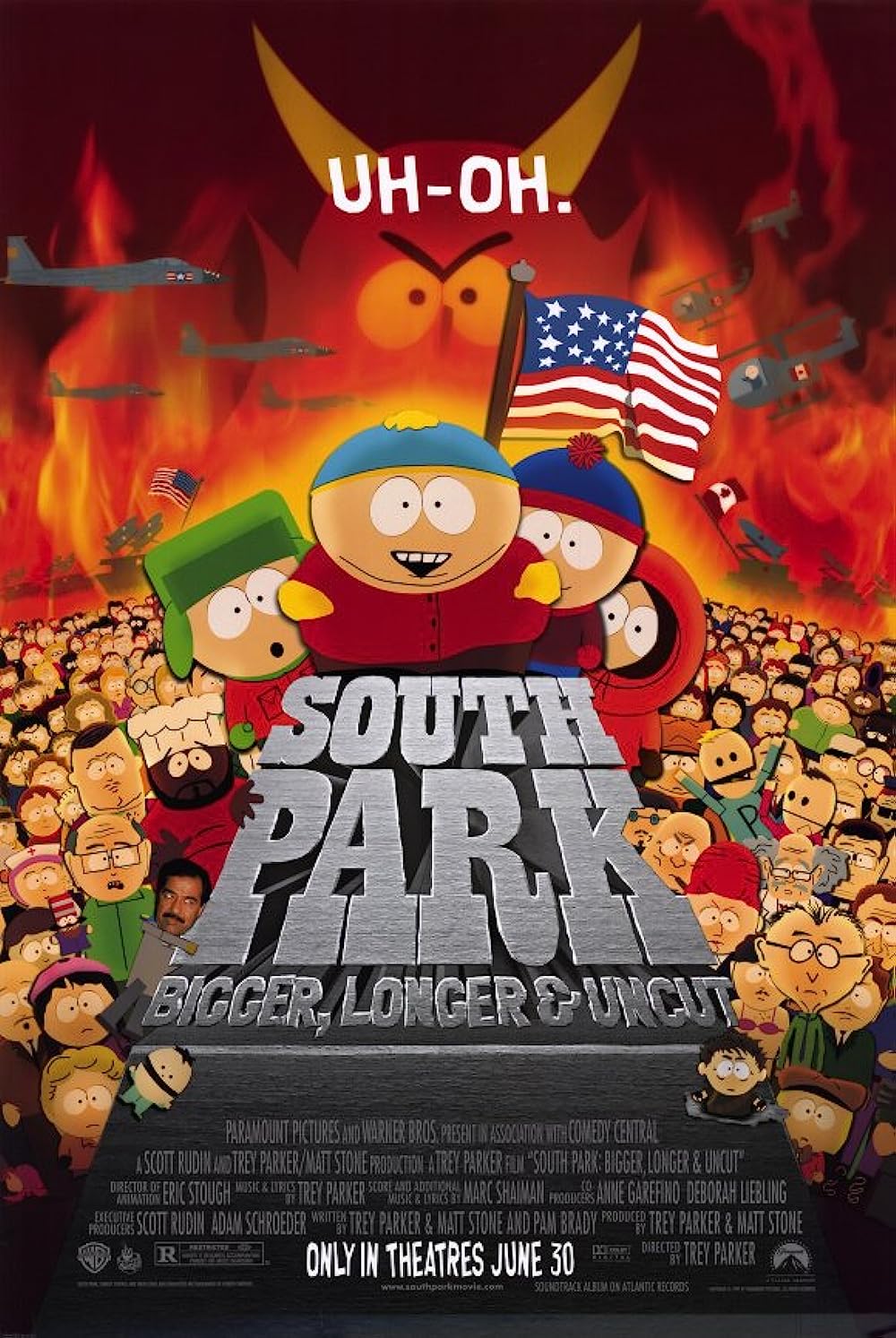 "South Park" is known for its offensive and crude humor, featuring a quartet of foul-mouthed children who are always getting themselves in trouble. This is perhaps one of the most offensive and shocking shows in television history, so when creators Matt Stone and Trey Parker were ready to bring their animated characters to the big screen, I'm sure many people didn't know what to expect. After having to resubmit "South Park: Bigger, Longer, & Uncut" multiple times to the MPAA since it kept receiving an NC-17 rating, the duo delivered a hard-R film that is hilarious and even more crass and crude than the show it's based off.

The movie follows Stan (Parker), Kyle (Stone), Cartman (Parker), and Kenny (Stone) as they go and see the new Terrance and Phillip movie for the first time. The Canadian actors are known for their toilet humor, which is evident in the movie the kids go and see. However, what they didn't expect was the extreme use of profanity, with songs like "Uncle F***er" present in the movie. Because of this, it influences all of the kids in South Park to start swearing like their favorite Canadian comedians.

When the parents of the kids find out what they are doing in school and learn who's behind all of it, they make it their personal mission to bring down the comedy duo. They decide that Terrance and Phillip violate their children's innocence, forcing the government to step in and declare that the comedians will be executed. This ultimately starts a nasty war with Canada, and our four main characters, who are still only in 3rd grade, must figure out a way to stop the war and the execution of their favorite actors. But, what they don't realize is that if they don't stop this war, Satan and Saddam Hussein will take over and rule the world, destroying humanity for good.

This movie is absolutely nuts and very profane and vulgar, but in a very good way. What other movie or television show would work if their young kids were going around using the F word and slinging insults at everyone that comes their way? This movie just builds upon what "South Park" is already known for, as well as delivering some of the most hilarious and memorable moments from "South Park" as a whole. Consider the scene where Cartman sings the song called "Kyle's Mom". The scene is basically him going around and calling Kyle's mother a "big, fat bitch" in multiple different languages and sayings. It's so offensive and shocking, yet you can't help but laugh along and hum the tune after the movie is over.

The characters are more profane than ever, especially Cartman, who is the fan favorite out of the four boys. They don't hold anything back, and deliver hilarious jokes that are racist, profane, sexist, graphic, etc. They don't realize what they are doing is bad or inappropriate for kids their age, and their parents don't really stop them. I think the fact that these characters have that childlike innocence and charm still intact, it makes these jokes and plot lines so much funnier. For example, there is a plot like where Stan is trying to look for the clitoris to impress a girl, not knowing that it is apart of the female anatomy.

Also consider the relationship between Satan and Saddam Hussein. They were able to take a feared terrorist, and turn him into an obscene and homosexual character. His relationship with Satan is so out of the blue, but like a lot of things in this movie, it just works so well. They are hilarious together, and I think it is interesting that the creators decided to make it where Hussein overpowers and dominates Satan, in more than one ways. They aren't too threatening or harsh, but they do make very good antagonists for a film like this.

The plot is very fun and fresh, even for today's time. Stone and Parker crafted the plot as a stab at the MPAA, which rejected this film multiple times like mentioned earlier. The fact that the Terrance and Philip movie contained multiple profanities and crude humor (the Canadian duo was actually created by Stone and Parker as a stab to the people who said that "South Park" is nothing but profanity and toilet humor) and influenced the kids watching it just shows how Parker and Stone will offend anyone who has wronged them. At the same time, the plot moves at a very nice pace, and allows for the characters to deviate from the main plot to deliver hilarious moments or focus on one of their own plot lines.

At the same time, I really enjoyed the musical aspect of this movie. The characters sing and dance through many songs in this movie, such as the energetic and wholesome "Mountain Town" to the prone-fueled "It's Easy, Mmmkay". Parker and Stone would go on to make more musical films and plays, such as the Tony-award winning play, "The Book of Mormon". But, for starting out with the musical aspect in this film, I think the duo does an amazing job of adding a musical aspect to a film like this.

Now in 2022, with films like "Beavis and Butt-Head Do America", "The Simpsons Movie", and the recently released "The Bob's Burger's Movie", I think this film from 1999 is the best adaptation of an adult animated television show that we have seen yet. The film takes everything good about the show, and makes it a thousand times greater. The duo behind "South Park" have started to make specials for the television show that have been appearing on Paramount+, but let's hope we will see another theatrically released film like this one from these hilarious filmmakers soon.